The KL Rahul-led team, which is now on six points, will be much relieved as they are no longer the bottom-ranked side 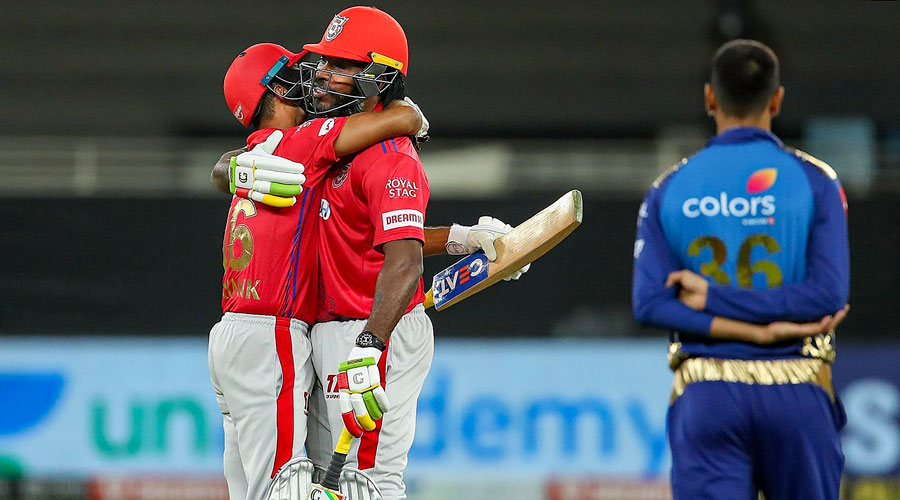 Like a thriller that pushes you to the edge of disbelief, Kings XI Punjab overcame two Super Overs to record a stunning victory over defending champions Mumbai Indians in Dubai on Sunday.

In fact, it was a day of Super Overs, with the afternoon match between Kolkata Knight Riders and Sunrisers Hyderbad too being decided through one. But the second game of the day pushed the entertainment level even higher.

After both Mumbai Indians and Kings XI were tied on 176/6 in regulation play, the match went into a Super Over.

But that did not prove to be decisive. Jasprit Bumrah bowled well for Mumbai Indians to restrict Kings XI to 5/2, but Mohammed Shami matched his Team India pace partner to stop Rohit Sharma’s team on 5/1 and ensure that the first Super Over was tied.

That forced a second Super Over in the same game, a first in the history of IPL.

This time Mumbai Indians batted first to score 11/1. Mayank Agarwal effected a super save on the boundary off the last ball, which would have otherwise been a six. Chasing 12 for victory, Chris Gayle hammered Trent Boult for a six off the very first ball before Mayank sealed it for the Kings XI with a couple of boundaries with two balls remaining.

The Kings XI are now on 6 points and are no longer the bottom-ranked side. They have now moved up to sixth by virtue of a better net run rate than Chennai Super Kings and Rajasthan Royals, both of whom are also on 6 points apiece.

Kings XI skipper KL Rahul played a blinder of a knock once again, taking his aggregate to 500-plus after Quinton De Kock’s 53, and an unbroken 57-run stand off just 21 balls by Kieron Pollard and Nathan Coulter-Nile propelled Mumbai’s total to 176/6.

But while Rahul remained firm, wickets fell at the other end with the likes of Gayle and Pooran departing even after being well set. But Deepak Hooda and Chris Jordan, with a bit of luck, fought hard to tie the match.