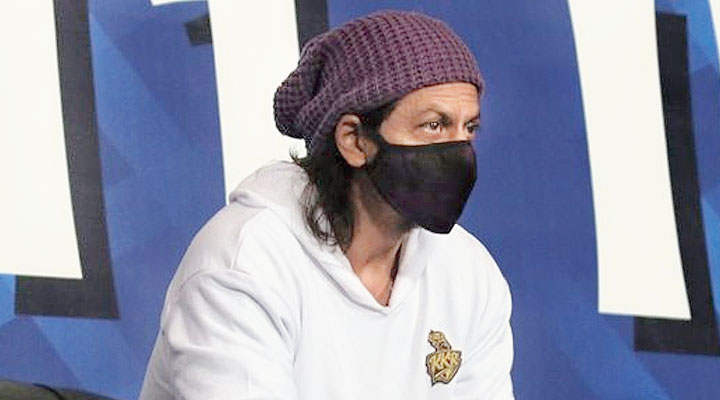 Rahul Tripathi’s biggest fanboy moment came in Abu Dhabi on Wednesday when he played a match-winning innings of 81 off 51 balls in front of his hero Shah Rukh Khan.

It was a “dream come true” for Tripathi as the superstar was soon seen showering praises on his innings.

His gesture made the KKR opener burst into laughter at the post-match presentation ceremony. The video of Shah Rukh delivering the dialogue at the highest pitch of his voice soon went viral on social media.

The adulation didn’t stop there. Moments later, as captain Dinesh Karthik was going back to the dressing room, Tripathi came from behind and gave him two mild taps on the back. Karthik then put his hand around Tripathi’s shoulder and introduced him to Shah Rukh in the stands as his “biggest fan ever”.

KKR’s principal owner once again didn’t forget to applaud Tripathi, who kept blushing at the adulation.

Tripathi opened for KKR with Shubman Gill and the innings revolved around him as the next highest score was only 17. He replaced Sunil Narine as opener and hit eight fours and three sixes during his knock.

However, the Maharashtra youngster didn’t forget to thank all involved with the franchise.

“I think it has been really fun. There had been a strong belief from everyone in the coaching staff. Abhishek Nayar has worked with us mentally and also in technique and that has helped in remaining positive.

“When I was not playing, I was enjoying the moment and I was just preparing myself thinking that whenever my moment will come, I will look to contribute for the team,” Tripathi told teammate Varun Chakravarthy in a video posted on iplt20.com.

He felt his innings was being talked about only because the bowlers successfully defended 167.

“My knock has become better because you guys bowled well and we won the game, winning knock changes everything. My knock is good because of the bowling group really doing well through the middle overs,” Tripathi said.