Asian Champions Trophy: India get the better of arch-rivals, again 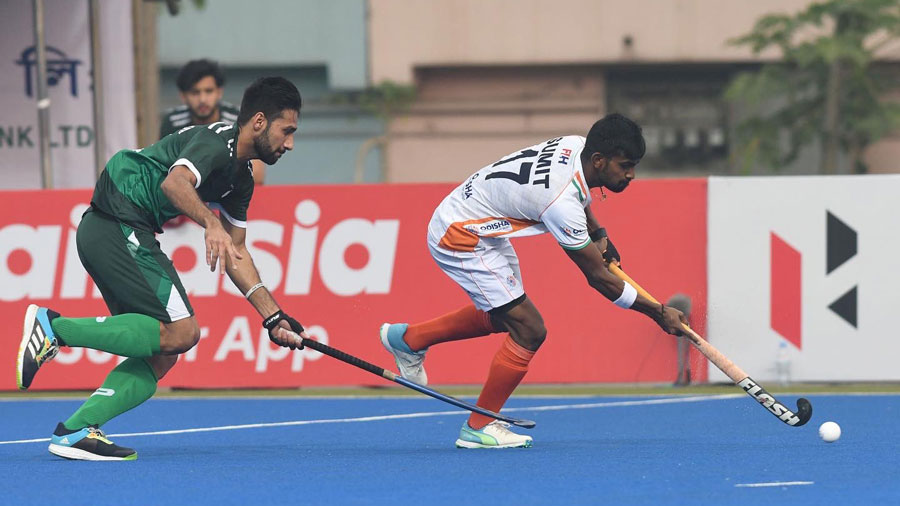 A misfiring India were made to toil hard before getting the better of arch-rivals Pakistan 4-3 in a pulsating third-fourth place contest to clinch the bronze medal at the Asian Champions Trophy (ACT) men’s hockey tournament here on Wednesday.

In their round-robin stage match on Saturday, India had defeated Pakistan 3-1 with Harmanpreet Singh scoring a brace and Akashdeep Singh netting the third.

After having topped the round-robin stages, the Tokyo Olympics bronze medallists were far from impressive in their last two games, and the Manpreet Singh-led side had to play out of their skin to outwit Pakistan and finish on the podium.
South Korea emerged as the champions after beating Japan 4-2 in shootout following a 3-3 stalemate at the end of the regulation 60 minutes of the title clash.

India pressed hard and created numerous chances, including 11 penalty corners, out of which they made use of just two.

India started the match on a bright note, pressing the Pakistani defence from the onset.

Unlike against Japan, India came out attacking and secured as many as four penalty corners straightaway, the last of which was converted by Harmanpreet with a powerful low flick in the first minute.

The Indians kept up the pressure with numerous raids inside the Pakistan circle but failed to create a clear-cut chance.

Pakistan drew level in the 10th minute, courtesy some sloppy defending by the Indians, and Afraz did enough to get past onrushing goalkeeper Krishan Bahadur Pathak.

The Indians responded promptly after conceding the goal and earned their fifth penalty corner soon, but Harmanpreet’s flick was saved by the Pakistani defence.

In the 22nd minute, India secured another penalty corner but once again Pakistan goalkeeper Amjad Ali came to his side’s rescue by denying Harmanpreet.

Four minutes later, Amjad was again in the thick of things when he saved Akashdeep’s reverse hit from close range.

India continued their attacking spree and earned their seventh penalty corner soon, but an alert Amjad made twin saves to deny Jarmanpreet Singh.

At the stroke of the half-time hooter, India secured their eighth penalty corner but, as has been the case, the finishing was not up to the mark. Three minutes after the change of ends, it was Pakistan who surged ahead when Abdul Rana scored from a rebound from the team’s second penalty corner.

India were lucky not to concede another, in the 43rd minute, as Rana’s attempt from Ali Shan’s pass hit the near post.

But seconds before the end of the third quarter, Gursahibjit Singh created a chance from nowhere and Sumit found himself at the perfect position inside the Pakistan circle to tap the ball in and draw level. With the scores tied at 2-2, the fourth and final quarter produced end-to-end hockey from both teams.

India had the better share of chances but Pakistan too didn’t give up without a fight.

Lalit Upadhayay came close to handing India the lead, only to see his deflection sail inches wide off the target from Gurinder Singh’s cross.

Three minutes from the final hooter, Akashdeep scored with a reverse hit from a pass off Lalit, but Pakistan responded within no time when Nadeem deflected in a long ball to reduce the margin, from the next move.

Two unnecessary yellow cards, to Hardik Singh and Sumit, in the last five minutes didn’t help India, but the suspensions didn’t hurt them either.