India at CWG: Heartbreak in women's hockey, Hima fails to qualify for finals

The 22-year-old Das from Assam finished third in semifinal 2 with a timing of 23.42 seconds 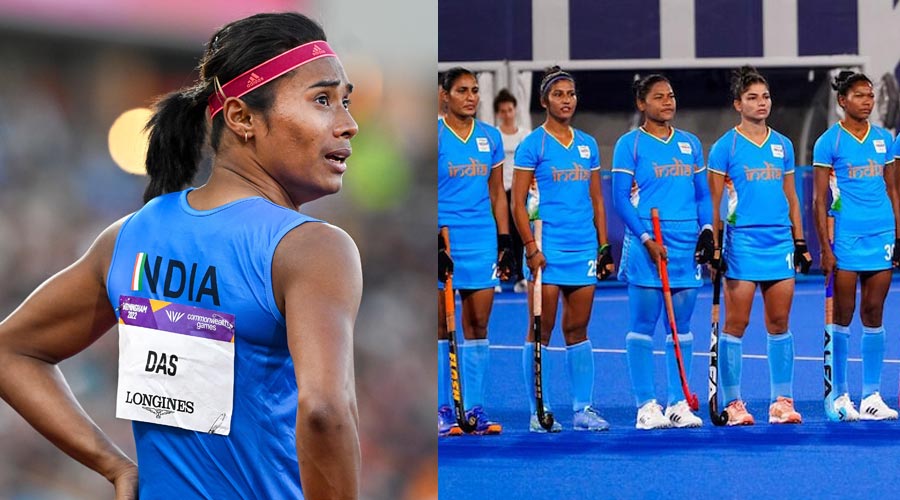 It was a heartbreak for the Indian women's hockey team as it lost 0-3 in the shoot-out to four-time champions Australia while star Indian sprinter Hima Das failed to qualify for the final of the women's 200m at the Commonwealth Games here on Friday.

Both the hockey teams were tied 1-1 at the end of regulation time in the semifinal on Friday. Australia took the lead in the 10th minute through Rebecca Greiner before Vandana Katariya equalised for India in the 49th minute.

The Indians, who are yet to concede a goal in the tournament, defended in numbers to keep their slate clean.

India made an attacking start and had the first chance in the eighth minute but Australia survived a close shave. Australia took the lead in the 10th minute, courtesy a defensive lapse from India as Greiner deflected in Ambrosia Malone's cross.

Australia secured their first penalty corner in the next minute but Monika made a goalline save. Two minutes later, India earned their second penalty corner but wasted the opportunity.

Australia started strongly in the second quarter and put pressure on the Indian defence from the start but the Savita Punia-led side maintained its structure. The Indians were not to be left behind as they secured their third penalty corner in the 21st minute but Gurjit Kaur's flick was saved by Australian goalie Aleisha Power. Three minutes later, Sangita Kumari's reverse shot from top of the circle was again denied by Power. In the 24th minute, India secured another penalty corner but the Australians defended in numbers to head into half time leading 1-0. The quarter too produced tooth and nail fight between the two sides and in the 44th minute Australia secured five penalty corners in succession but India captain and goalkeeper Savita and her defence put up a valiant show to deny any further lead to their rivals. A minute into the final quarter, Savita once again came to India's rescue to keep out Stephanie Kershaw's try.

The Indians did not lose heart and kept on mounting raids on the Australian defence which wilted for the first time in the competition in the 49th minute when Vandana Katariya neatly deflected in Sushila Chanu's defence splitting free hit from outside the circle to level the scores.

India secured another penalty corner in the 51st minute but again Power made a fine reflex save to deny Gurjit. A minute from the hooter Australia secured two more penalty corners but Savita made a fine double save from the first attempt as the Indians defended out of their skin to take the match into shoot-out.

But it turned out to be an anti-climax for India in the shoot-out as Lalremsiami, Neha Goyal and Navneet Kaur missed their first three attempts, while Australia converted all their chances to set up a show-down against hosts England in the final.

The Indians, however, should consider themselves unlucky as Malone initially missed her first attempt for Australia but the umpires gave her a second chance as the clock didn't start on time. Kaitlin Nobbs and Amy Lawton were the other scorers for the Hockeyroos in the shoot-out.

In the other semifinal, England beat New Zealand 2-0 in a shoot-out after both the teams failed to break the stalemate in regulation 60 minutes.

India will now take on New Zealand in the bronze medal match on Sunday.

The 22-year-old Das from Assam finished third in semifinal 2 with a timing of 23.42 seconds.

Namibia's Christine Mboma and Australia's Ella Connolly qualified with timings of 22.93s and 23.41s respectively from the heat.

Hima thus missed out of the final with the finest of margins as her timing was just 0.01 seconds shy of Connolly.

There are three semifinal heats in the women's 200m with the top two in each and the next two fastest advancing to the final.

Hima had qualified for the women's 200m semifinals after winning her heat with a timing of 23.42s on Thursday.