No matter how much it might have felt like the title was meant to be for Tsitsipas, it was all a false promise and yet another chance for the world’s No. 1 player to demonstrate his resilience and poise under pressure 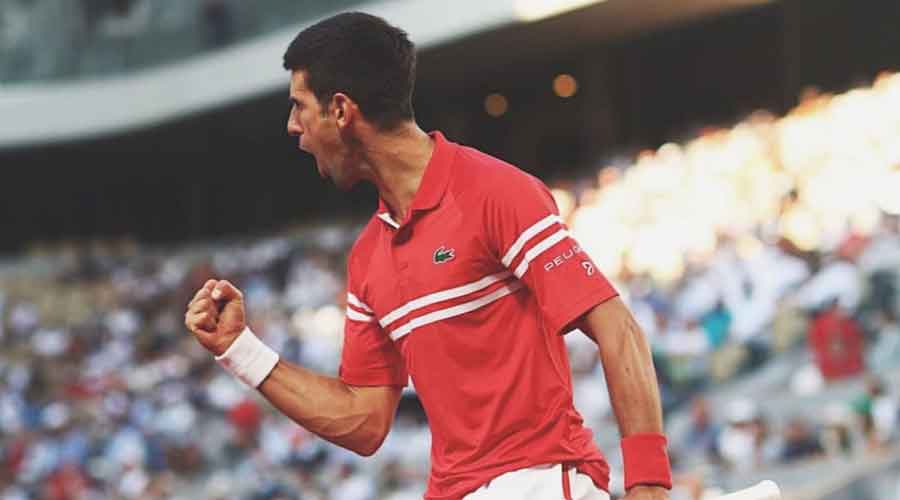 The atmosphere seemed as if it was designed to make a Greek feel at home in his first Grand Slam singles final.

Greece’s azure-and-white flags were draped over seats in the French Open’s main Philippe Chatrier Court. The fans, most of them French, were chanting Stefanos Tsitsipas’s surname and often cheering Novak Djokovic’s errors. And then there was the weather: sun-kissed with a slight breeze and a pale blue sky.

But no matter how much it might have felt like a title was meant to be for Tsitsipas on Sunday as he jumped out to a two-set lead, it was all a false promise and yet another chance for the world’s clear No. 1 player to demonstrate his resilience and poise under pressure.

“He gave me no space,” Tsitsipas said of the final three sets, looking understandably crestfallen but also a bit befuddled.

Djokovic is the champion who has beaten Roger Federer on three separate occasions in Grand Slam tournaments after saving two match points, including the 2019 Wimbledon final.

Djokovic is the man who prevailed against Rafael Nadal in a grinding 2012 Australian Open final that lasted nearly six hours; the man who stopped Nadal on Friday in a heavyweight bout of a semifinal at the tournament Nadal has won a preposterous 13 times.

The truth is, the opponent does not have Djokovic where he wants him in a major tournament until he has the big trophy in his hands.

Tsitsipas, like so many players before him, had to settle for the smaller prize. He was asked what he had learned from the defeat.

The best-of-five format, which is only in use for men’s singles at the four Grand Slam tournaments, remains a major roadblock to the younger set in their pursuit of winning titles over the Big Three. Long form gives Djokovic more time to untie tactical knots; more time to impose his groundstrokes and great returns; more time to create doubt and stress in the minds of his less experienced opponents.

Dominic Thiem broke the long run of the Big Three — Djokovic, 34; Nadal, 35; and Federer, 39 — by winning last year’s US Open, but he did not have to defeat any of them along the way. Nadal skipped the event over virus concerns, and Federer was recovering from knee surgery. Djokovic eliminated himself in the fourth round by smacking a ball that inadvertently hit a lineswoman in the throat, resulting in his ejection.

But Thiem has faded, struggling mentally with the tour’s pandemic-related restrictions and straining to retain his drive and excellence. He has been touchingly open about his doubts, but his slump also makes you marvel at the drive and sustained focus of a player like Djokovic, who has had plenty of pandemic concerns of his own and actually tested positive for the coronavirus. Djokovic had his own fade from late 2016 to early 2018, but he has come back at full roar and full stretch. (Nobody can stretch the way Djokovic does.)

The younger generation, however talented, has yet to break through and win the titles that matter most against the players who matter most.

Tsitsipas, a 22-year-old seeded fifth in this tournament, spent several minutes in his chair after match point, his face hidden by a towel. But defeat was not the saddest part of his day. In a social media post after the match, he revealed that his “very beloved” paternal grandmother had died just five minutes before he walked on court. It was unclear whether he was aware of her death at the time. “Lifting trophies and celebrating wins is something, but not everything,” he wrote on Instagram.

That is undeniable, but Tsitsipas does seem to have Grand Slam titles in his future. He possesses the ambition and the tools: a big bang of a forehand, a forceful and varied serve, a one-handed backhand that he can drive effectively from higher contact points or slice to change the pace of points and defend in the corners. He also has above-average volleys that he could have put to more frequent use on Sunday, no matter how daunting it is to face Djokovic’s passing shots.

Tsitsipas, the son of a Russian mother and Greek father, is a great athlete, not just a great tennis player. He is quick on the move with improving core strength and with a hairstyle and rolling walk that recall Bjorn Borg, the great Swedish champion who, now 65, awarded the trophies on Sunday looking as cool as ever. (He skipped the socks with the loafers.)

But though Borg faced plenty of greatness in John McEnroe, Ivan Lendl and Jimmy Connors, he never had to deal with the combined firepower and long-running excellence of Djokovic, Federer and Nadal.

Djokovic is on course to be the most statistically successful of the Big Three and already holds the men’s record for total weeks at No. 1. He will reach 325 weeks on Monday, and for now, the most gifted youngsters — Tsitsipas, Daniil Medvedev, Alexander Zverev, Andrey Rublev, Jannik Sinner and Lorenzo Musetti — can only look up and wonder if they truly have what it takes.

As a group, they can take some solace in knowing that two of them were up, two sets to none, on Djokovic at Roland Garros. Musetti, a 19-year-old Italian, took his lead in the fourth round before running out of steam and straight into Djokovic’s staying power.

“Despite my loss today, I have faith in my game,” Tsitsipas said. “I very much believe I can get to that point very soon. I was close today. Every opponent is difficult. There’s a small difference between the player I played today and the ones from before. But I think with the same attitude and if I don’t downgrade myself, I see no reason for me not to be holding that trophy one day.”

For now, such trophies still belong to the elders, no matter how loud the cheers or how reassuring the weather.

Gift of a lifetime

Novak Djokovic did not throw his racket to the sky after his come-from-behind five-set victory against Stefanos Tsitsipas in the French Open final on Sunday. Instead, he walked over to the stands and handed it to a young boy (TV grab, left) who had been part coach, part fan and all heart during the four-hour-11-minute epic. The boy erupted in a fit of disbelief and joy.

The Serb champion later explained that his gesture was a reward for a fan who had remained in his corner even when he lost the first two sets and appeared headed for defeat. “I don’t know the boy, but he was in my ear the entire match. Especially when I was two sets down, he was encouraging me; he was actually giving me tactics as well,” Djokovic told reporters with a laugh. “He was coaching me, literally, and I found that very cute.”