Will leave my political post for football: Kalyan Chaubey 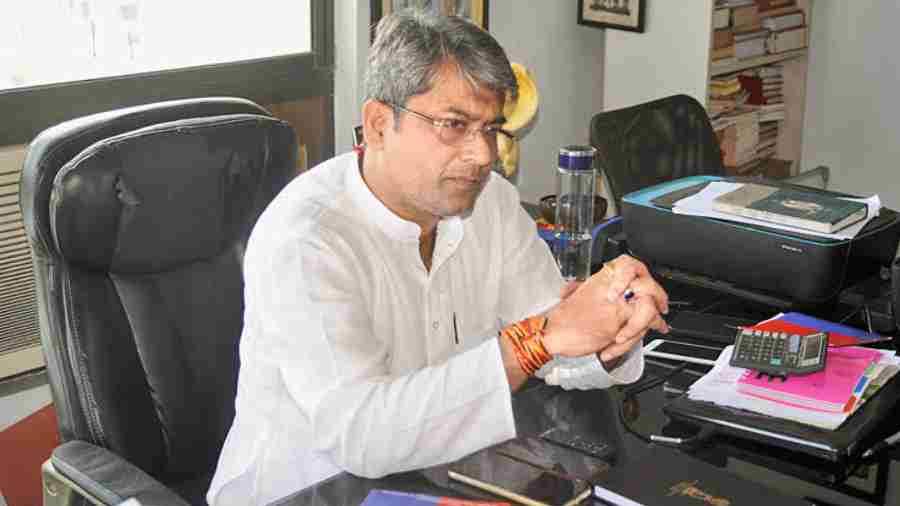 You are a busy man now... AIFF president as well as a key leader in the state BJP. Both jobs are demanding in their own way. How are you managing time?

I will be opting out of my political responsibilities very soon. I personally believe in being fully responsible to the post I am appointed to. I try to justify my post with complete dedication and honesty. I have realised that I cannot balance both the posts as the AIFF president and my political responsibility as the president of BJP’s north Calcutta unit. By continuing with both I will not able to give 100 per cent to any of the two important posts. Yes, my CV could become better, but that’s not important. I have spoken to my leaders. In another couple of months, I am expected to vacate my political post once my successor settles down. Again, I feel that as the AIFF president, it will not be fair to have a political affiliation as it may create difficulty in acceptance for those who are not having my political affiliation. Why will they support you? At the end day, it will not give them political mileage. (States like West Bengal (TMC) and Kerala (Left Democratic Front), which have a considerable Indian football following, are ruled by nonBJP parties. Odisha, one of the venues for the Fifa Under17 World Cup and focusing on the development of women’s football, is also not an ally of the BJP).

Indian football hardly has a pool of players from which the national team coach can build a strong team. Will that be one of your priorities?

We want to start an under-21 league at the district level. We have more than 700 districts across India. From there if 70 districts play football and 30 players come out, you get a pool of 2100 players who are below 21 years. It gets easier to build an under-23 team. Also, it gives an identity to a fan from that district. We lose too many players once they graduate from the under18 level. The under-21 league will be the answer to that.

Are you in favour of foreign players in leagues?

No. I give you one example. I had gone to Germany (Karlsruhe) for trials where I got selected to play in the regional league. But then they decided that in the lower leagues, foreign players will not be allowed. I believe in those lines. Foreign players in the lower leagues hinder the growth of domestic footballers. Yes, an Indian player may falter initially but soon he will start to deliver. If your child fails an exam will you kick him out? These players are our children. I will also add that these are my thoughts and it’s up to the board to decide whether they should take my views or not. If the committee is on the same page with me, we will move forward.

How important is government support in the development of football in India?

When we met the Fifa president (Gianni Infantino) in Qatar, one of the topics that came up for discussion was how well India has publicised the Fifa Under-17 Women’s World Cup. I shared the concern with Union sports minister Anurag Thakur. The point I am trying to make here is the importance of government help in developing sport. In 24 hours, he called a meeting with senior officers of information and broadcasting and sports ministries. At that meeting, decisions were taken on the roles of Doordarshan, Press Information Bureau (in promoting the under-17 World Cup). It was also decided that at 30 venues, matches will be played with at least six teams, meaning five games for each, which will also generate interest about the Under-17 World Cup. All these were done in 48 hours. SAI will pay for the expenses of hosting matches at these 30 venues. This just shows what is possible if a sports federation is connected with the government. We will be in constant touch with the union government and all state governments.

What’s your plan for the grassroots?

We are planning to train 18 lakh children through an initiative of the HRD ministry. It will be implemented through the sports ministry, AIFF, state associations and the state government. I will meet the Army and discuss how they can support this initiative. This can be part of nation-building efforts. Let’s not talk about training 25-30 children at academies or about when we will play the World Cup. Let’s first talk of developing the base. This is a long-term plan, of say 10-12 years, but unless you have a vision that spans 10-15 years, you cannot bring a change in a country like India.

Women’s football is another aspect that India needs to work on. What are your thoughts on that?

Will your team work in tandem with the state associations? The last regime was often accused of bypassing the member associations.

This year Kerala hosted the Santosh Trophy where the AIFF bypassed the state association. If you want to achieve something, you can’t do it alone. That’s why we have decided to depute a technical officer and an administrative officer in each of the 36 affiliates and the salaries of these persons will be borne by the federation. That is how we plan to bring professionalism to the functioning of the state associations and realise the vision that we have for Indian football.

When will we see promotion and demotion in the ISL? From next season the I-League champions are expected to play in the ISL.

ISL clubs take a loss of Rs 22 crore per season. Will the promoted team have such deep pockets?  Also, the team which gets relegated from the ISL may lose interest. You need a mature discussion with all the stakeholders and find a way forward...

During Praful Patel’s tenure, India did not reach the point it was supposed to attain.