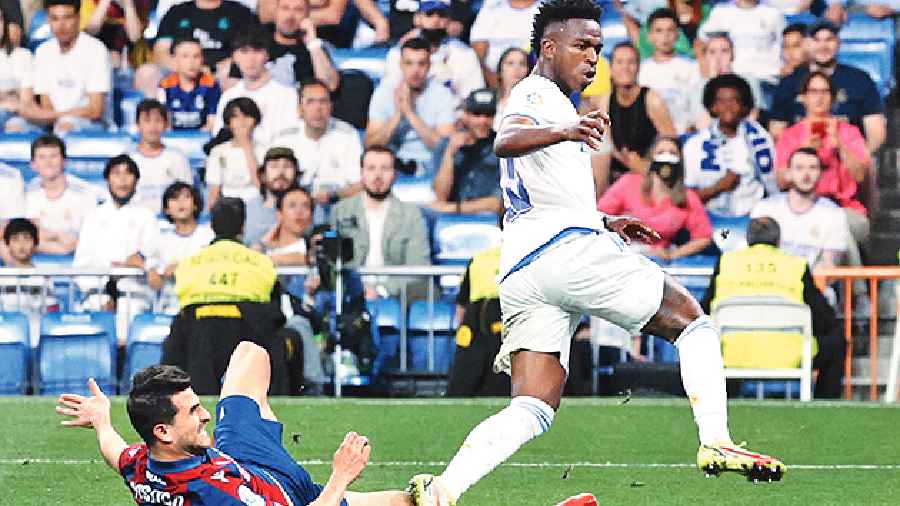 Levante were relegated from La Liga on Thursday after they were thrashed 6-0 by champions Real Madrid, with Vinicius Junior scoring a hat-trick.

Bottom club Levante needed to win to keep alive their dwindling chances of survival but against a rampant Real, that hope was quickly snuffed out. Real, who will face Liverpool in the Champions League final later this month, went ahead through Ferland Mendy before goals from Karim Benzema and Rodrygo made it 3-0.

Vinicius opened his account just before the interval before adding two more in the second half to condemn Levante to the drop as they suffered their 19th defeat of the season. Mendy opened the scoring in the 13th minute with a fast counter-attack started by Luka Modric before Benzema extended their lead six minutes later after heading in a Vinicius cross.

It was Benzema’s 44th goal in all competitions this season as he levelled Raul Gonzalez for second place on Real Madrid’s all-time goalscoring list with 323 goals.

Only Cristiano Ronaldo is ahead of him with 451 goals.

The Frenchman is having a career year as La Liga top goalscorer with 27 goals.