Erling Haaland struggles in first half against Southampton 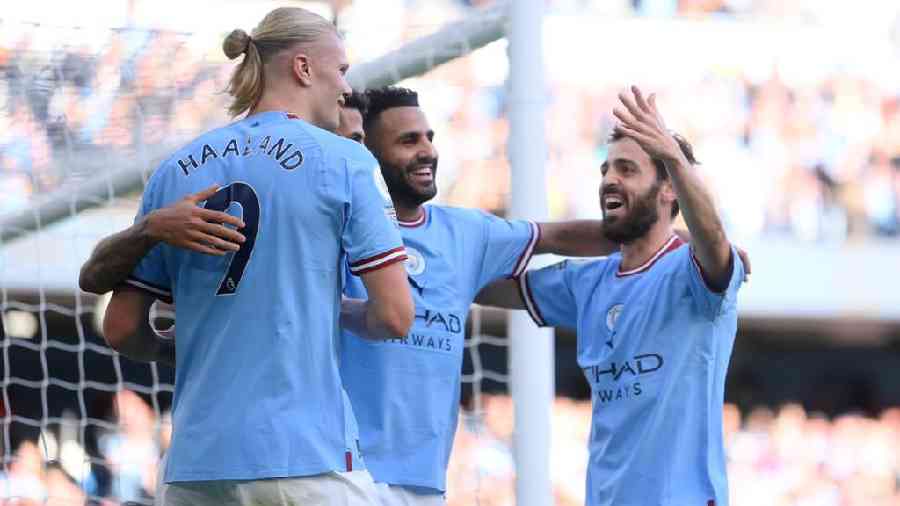 The victory took City to the top of the standings on 23 points from nine matches although Arsenal, on 21, can reclaim the lead if they beat Liverpool at home on Sunday
Twitter
Reuters   |   Manchester   |   Published 09.10.22, 03:26 AM

Erling Haaland scored for the 10th game in a row in all club competitions as Manchester City cruised to a 4-0 win at home to Southampton on Saturday to move to the top of the Premier League.

The Norwegian striker had endured a difficult afternoon by his usual prolific standards but eventually got on the scoresheet in the 65th minute to grab City’s fourth goal after first-half strikes from Joao Cancelo and Phil Foden plus a volley after the interval from Riyad Mahrez.

The victory took City to the top of the standings on 23 points from nine matches although Arsenal, on 21, can reclaim the lead if they beat Liverpool at home on Sunday.

Haaland went into the game in ruthless form after hitting a hat-trick in last week’s 6-3 drubbing of Manchester United and scoring a double in the 5-0 win over Copenhagen in the Champions League.

However, luck evaded him when he narrowly failed to open the scoring in the first half, smashing a shot off the inside of the far post and watching the ball trickle out of the goal.

Haaland later scuffed a shot wide and mistimed a header in the second half, but he was not to be denied, firing a first-time shot into the net after a cut-back from Cancelo to score his 15th league goal of the season and his 20th overall.

Tottenham Hotspur handed Brighton & Hove Albion their first home loss of the league season after Harry Kane’s first-half header was enough for the London side to seal all three points in a 1-0 win.

Spurs took the lead in the 22nd minute when Son Heung-min’s cross to the near post was deftly turned home by a glancing header from Kane, who was falling backwards to make contact with the ball to score his eighth league goal of the season.