The Red Devils slip down to fifth place, a point behind Arsenal who have three games in hand 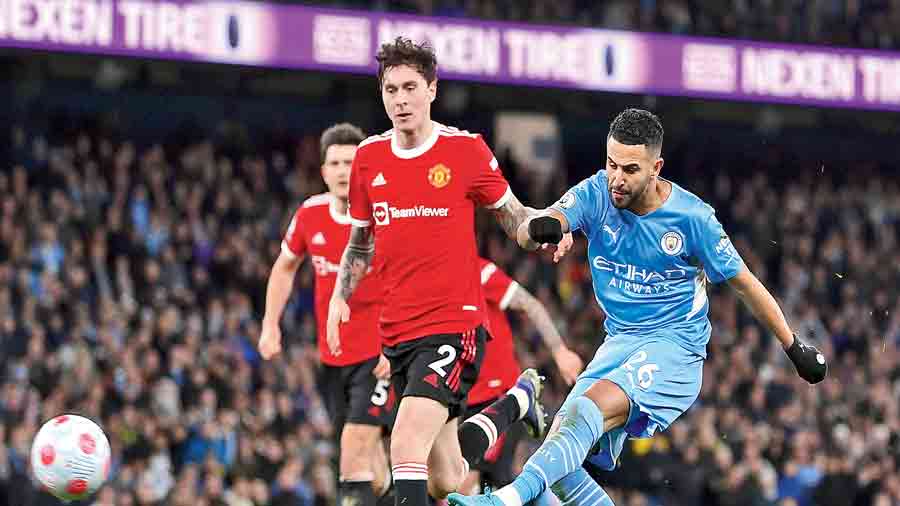 Kevin De Bruyne and Riyad Mahrez both scored twice as Manchester City restored their lead at the top of the Premier League to six points with a 4-1 Derby victory over Manchester United at the Etihad Stadium on Sunday.

De Bruyne put City ahead in the fifth minute, slotting home a low pulled-back pass from Bernardo Silva but United drew level through a superb curling shot from Jadon Sancho.

But Belgian De Bruyne restored City’s advantage finding the target after Phil Foden had powered into the area and seen his shot parried out by David De Gea.

City dominated after the break and made it 3-1 when De Bruyne struck a corner deep to the edge of the box and Mahrez met it with a first-time drive which took a slight deflection off Harry Maguire.

Mahrez completed the victory with a goal that was initially flagged as offside but VAR found the Alex Telles had played the Algerian onside before he latched on to an Ilkay Gundogan pass and blasted in off the shoulder of De Gea.

City have 69 points from 28 games with Liverpool on 63 from 27 matches. United slip down to fifth place, a point behind Arsenal who have three games in hand.

Arsenal added to struggling Watford’s woes with a 3-2 win at Vicarage Road, boosting their hopes of Champions League football next season and keeping their hosts mired in the relegation zone.

Martin Odegaard put the Gunners ahead in the fifth minute, latching on to a Bukayo Saka pass after a sweeping move down the right and lashing the ball in low under Watford keeper Ben Foster.

Cucho Hernandez replied in spectacular fashion for Watford six minutes later with a perfectly timed bicycle kick that left the Arsenal back line rooted to the spot.

Saka reclaimed the lead for Arsenal on the half hour, stealing the ball off Tom Cleverley outside the box, playing a one-two with his captain Alexandre Lacazette and thumping his shot high into the net.

Early in the second half, Gabriel Martinelli finished off a well-worked Arsenal move with a strike from distance to give the visitors a two-goal cushion.

But Watford’s Moussa Sissoko put the visitors on edge in the 86th minute, skipping in behind the defence and squeezing a shot under keeper Aaron Ramsdale.

Arsenal rode their luck in the final minutes, however, to hold on for the win.

Liverpool forward Sadio Mane’s first-half goal eked out a 1-0 victory over West Ham United but Juergen Klopp’s side could count themselves lucky to earn maximum points on Saturday.

Liverpool were far from their dominant selves as they claimed a seventh successive league win but were let off as West Ham’s Pablo Fornals, Manuel Lanzini and Michail Antonio all failed to capitalise on their opportunities.

The hosts dominated possession and also had numerous chances but there was relief at the final whistle.

“I don’t know if we will remember this game as one of the most important ones because it was a really tricky fixture in the first place,” Liverpool manager Klopp said.

“We could have scored more but didn’t. They had big chances but you can’t win the amount of games we have won without some luck from time to time. It was a special win.”

West Ham coach David Moyes has never managed a team to victory at Anfield, and will reflect on how close his side came to changing that statistic.