The 23-year-old, a gold medal contender, was the lone athlete to breach the automatic qualification mark of 8m 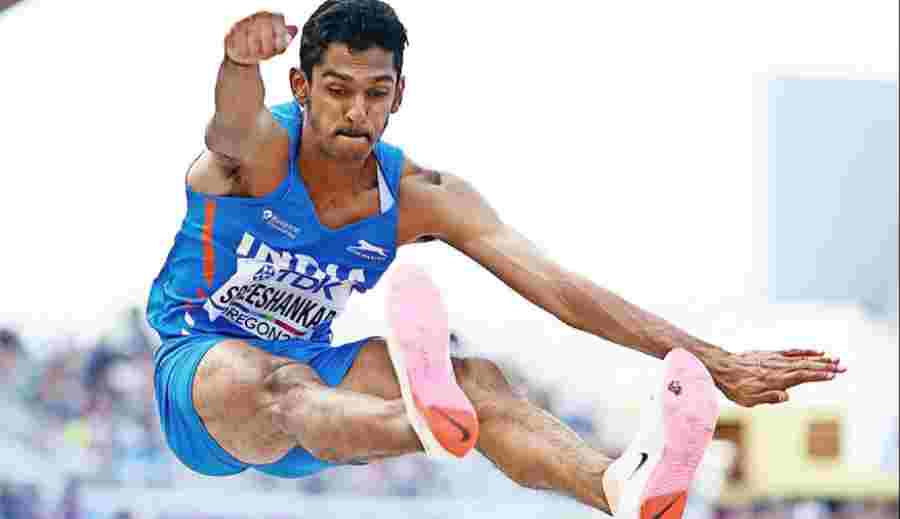 National record holder Murali Sreeshankar topped the men’s long jump qualification round to storm into the finals along with Muhammed Anees Yahiya, who qualified as eighth best at the Commonwealth Games athletics competition here on Tuesday.

The 23-year-old Sreeshankar, a gold medal contender, was the lone athlete to breach the automatic qualification mark of 8m, with an opening round effort of 8.05m in Group A.  Sreeshankar, who finished seventh in the recent World Championships in Eugene, USA, has a season’s and personal best of 8.36m.

Shot putter Manpreet Kaur also made it to the final as one of the nine athletes who could not breach the automatic qualification mark of 18m but one among the best 12 performers. The 32-year-old Kaur finished fourth in Group B qualification round and seventh overall with a best throw of 16.78m which she achieved in her third and final throw. She has a season’s best of 18.06m and personal best of 18.86m.

Top Indian sprinter Dutee Chand crashed out after finishing 27th overall in the preliminary heat races. The national record holder (11.17s) clocked a disappointing 11.55 seconds to finish fourth in heat number 5. The 26-year-old Dutee has a season’s best of 11.40s which she had clocked during the National Inter-State Championships in June. She had run a wind-assisted 11.38s in Kazakhstan, also in June.

Indian swimmers Advait Page and Kushagra Rawat qualified for the final of the men’s 1500m freestyle after finishing fourth in their respective heats. Page was the better of the two Indian swimmers, clocking 15:39.25s in heat 1 while Rawat had a timing of 15:47.77s in heat 2. Earlier in the day, Srihari Nataraj bettered the best Indian time en route to a third place finish in heat 2 but could not qualify for the final of the men’s 200m backstroke event. Nataraj clocked 2:00.84s to be the first reserve in the event. Luke Greenbank of England won the heat with a timing of 1:56.33s.

India’s leading squash player Saurav Ghosal will fight for the bronze medal after being outclassed by New Zealand’s Paul Coll in the men’s singles semi-finals. Ghosal went down 9-11, 4-11, 1-11 to the world No. 2 in one hour and 23 minutes.

The Indian women’s hockey team went down 1-3 to England in a Pool A match.  England found an early goal after Giselle Ansley (3rd minute) got a deflection off a penalty corner into the Indian goal. Tess Howard made it 2-0 in the third quarter (40th), before Hannah Martin scored the team’s third in the fourth and final quarter (53rd). With few seconds to go for the final hooter, India scored a consolation goal through Vandana Katariya (60th), via a deflection off a penalty corner.

A certain Kieren Pollard is here to compete in his very first Commonwealth Games but he is not a cricketer. The 23-year-old swimmer from Western Australia has attracted a lot of attention as he shares his name with the T20 star from the West Indies.

However, the striking similarity ends with the name. Pollard the swimmer is supposed to take part in three events and raced alongside India’s Srihari Natraj in the men’s 200m butterfly. Australia are always favourites in the aquatics competition at the Games and this edition is proving to be no different.

Pollard however has a long way to go and is soaking it all in at his first major event. “Such an honour to represent the green and gold,” reads one of his Instagram posts. His profile on the Western Australia website gives a glimpse of his character. “It’s the days when the body aches, the desire is low, you feel tired and you feel weak... those are the days when champions train.” He considers his first podium at the 2019 Australian Championships as his fondest memory. (AP/PTI)