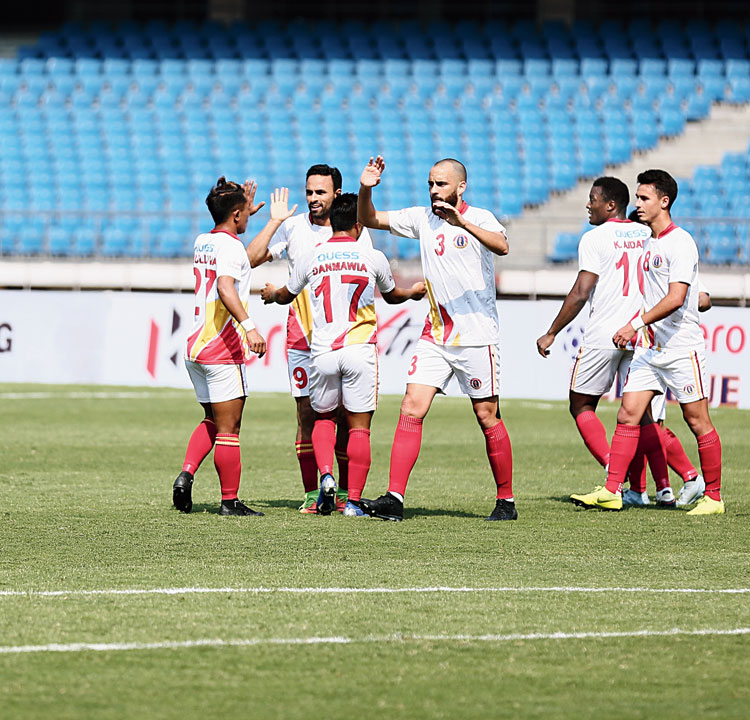 The win helped East Bengal consolidate their place in the second position on the table with 36 points from 18 matches, trailing table-toppers Chennai City FC by four points.

Chennai City would seal the title if they beat Churchill Brothers in their next match on Friday.

East Bengal scored twice in the first half itself through Enrique Esqueda and Jaime Colado. Real Kashmir, who were reduced to 10 men in the 28th minute, launched several raids in the second half and pulled one back when Zambian Aaron Katebe converted a penalty in the 67th minute.

The defeat dashed Real Kashmir’s title hopes. They have 33 points from 18 matches at present and at the most can add another six points to their tally.

If East Bengal were smooth and purposeful in the first session, their rivals displayed opposite character. Their defence was pathetic and they often turned physical in the midfield.

One such error cost Real Kashmir dear as Ghanaian Abednedo Kofi was given marching orders by referee A. Rowan. Kofi was clearly at fault for committing a foul on Johnny Acosta and was given a yellow card. He turned around to move towards the referee in an intimidating manner and was sent off.

East Bengal, on the other hand, controlled the midfield and took lead in the 20th minute. Laldanmawia Ralte did a fine job from the right and sent the ball at the goalmouth with a perfect cross. An unmarked Enrique headed in.

East Bengal scored their second goal a couple of minutes before half-time. They were building pressure in the midfield, and a good understanding between Enrique and Santos saw the latter scoring with a perfect volley.

Not many expected Real Kashmir to hit back in the second half, that too with 10 men. But they attacked with vigour and kept the East Bengal defence under pressure.

They scored when goalkeeper Rakshit Dagar fouled Bazie Armand inside the box and the referee awarded them a penalty. Aaron made no mistake to score from the spot.

A few minutes later, East Bengal were lucky not to concede a goal as Mason Robertson shot from close range.