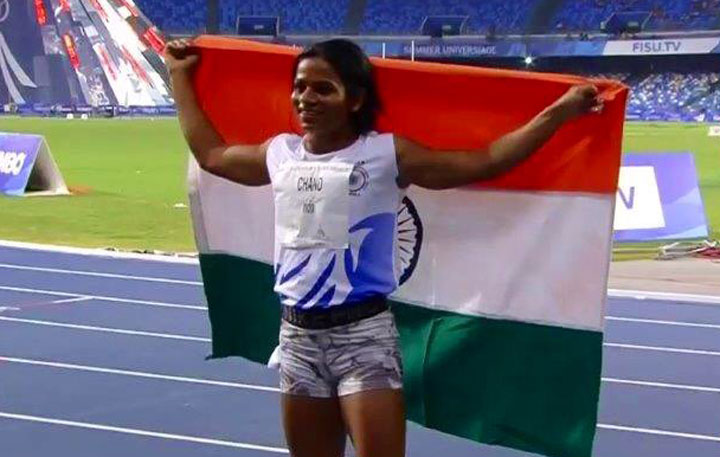 Dutee Chand has now become only the second Indian sprinter to win a gold in a global event after Hima Das, who clinched the top spot in 400m in the World Junior Athletics Championships last year.
(@airnewsalerts)
The Telegraph With PTI   |   Napoli   |   Published 10.07.19, 10:02 AM

National record holder Dutee Chand became the first Indian woman track and field athlete to clinch gold in a 100 m dash when she stepped past the finishing line at the World Universiade in Napoli on Tuesday night.

The runner from Odisha, whose national record stands at 11.24 seconds, clocked 11.32 seconds.

She is the second Indian sprinter to win a gold in a global event. Hima Das clinched the top spot in 400m in the World Junior Athletics Championships last year. Dutee, however, managed to win the gold in 100 m, which is the most watched sprint in track and field.

Dutee, who had a silver each in 100m and 200m in the 2018 Asian Games, is also only the second Indian track and field athlete to win a gold in the World Universiade. Inderjeet Singh had clinched the top spot in men's shot put event in the 2015 edition.

After winning the race, Dutee tweeted: “Pull me down, I will come back stronger!” She further added: “With years of hardwork and your blessings, I have yet again broken the record by winning the Gold in 100m dash in 11.32 seconds at The World University Games in Napoli.'

The 23-year-old led the race from start to finish. Running at lane number 4, Dutee was the first one out of the eight athletes to blast off the starting blocks and she made most of it to fend off a late challenge from Del Ponte (11.33) of Switzerland. Lisa KwaYie of Germany took the bronze.

Dutee has a season best of 11.26 seconds in 100m, recorded in the Doha Asian Championships in April. She could not reach the semifinals in the previous edition of the World University Games in Taipei City in 2017.

The sprint queen was recently in the news for going public about her 'genuine love' for a girl three years younger. 'We are in a relationship for the last two years. There has been nothing wrong in it. I will marry her after the Tokyo Olympics in 2020,' Dutee had said.

Another controversy which enmeshed Dutee recently was her successfully fought case in the Court of Arbitration for Sport against the rules of the International Association of Athletics Federations on hyperandrogenism, a medical condition characterised by excessive levels of androgen, that put a limit on testosterone levels of women competing in track and field events. The rules were withdrawn in 2018.

She is yet to qualify for the World Championships to be held in Doha in September-October.

President Ram Nath Kovind congratulated Dutee on her feat and the sprinter from Odisha did not wait to thank him for his wishes.

Thank you, sir. I will try my best to bring Olympics Gold Medal home. Once again, many thanks for your blessings. https://t.co/GuNzuhu6Yd

The Prime Minister, the chief minister of Odisha and Sports minister Kiren Rijiju also congratulated the sprint queen on her historic victory...

Congratulations @DuteeChand for winning a hard earned and well deserved Gold in the Women’s 100 m finals.

Anyone who follows the spirit of Olympics and #athletics would understand how mighty an achievement this is on the world stage! I have no words to describe my sense of jubilation and fulfilment🇮🇳 https://t.co/LYj2iWyOYu

The chairman of Mahindra Group, who recently created a sensation for his tweet about sponsoring Indian cricket team's superfan Charulata Patel for the rest of the ICC World Cup, also took to the social networking platform to congratulate the 23-year-old runner.

Way to go @DuteeChand ! The 100m sprint is the most exciting event in athletics. It’s a display of sheer physical ability and power. What a delight to see an Indian athlete power her way to the front, leaving all others behind.... https://t.co/7f0KQg48s6

Netizens pointed out that her triumph is greater than the obsession with the ICC Cricket World Cup.

Some even pointed out that her feat was getting overshadowed by the cricket match between India vs New Zealand, which was called off yesterday because of rain.

No one has time to congratulate her. Every one behind @cricketworldcup

Congrats. You deserve a even better clapping than our current Indian performance in the @cricketworldcup due to the odds you are against. More power to you.

Even though #CricketWorldCup is on, your stand out performance is registered everywhere. That is the power. Congratulations #DuteeChand for winning #gold at #WorldUniversityGames pic.twitter.com/8KtWwLe9Ta

Congratulations for winning Gold and I see ur first to Achieve this happiness to our country ,I proud to say this is bigger achievement then WorldCup .👍#DuteeChand

Others were just excited about her victory.

Me : Give me an example for bad news.

Friend : Phone with no battery left?

Friend : When I lost my job?

Indian sprinters are calling the shots in world events. After #HimaDas, its the turn of #DuteeChand. Just waiting for the Cricket World Cup.
# भारत बनेगा विश्वगुरू। https://t.co/b7UIF9skav