At Tea on Wednesday, the West Indies were 127 for 4, suffering a mini-collapse after captain Kraigg Brathwaite and John Campbell’s brisk opening stand of 83 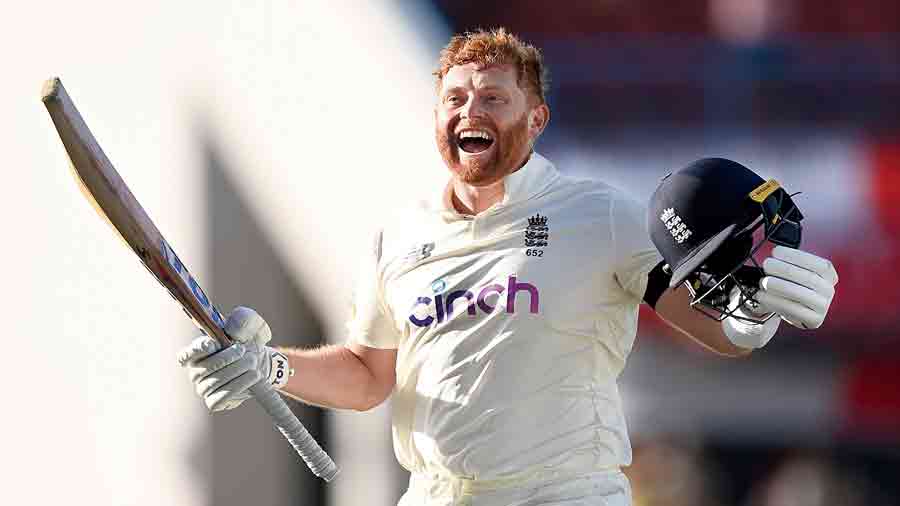 Jonny Bairstow of England celebrates after reaching his century against the West Indies at North Sound in Antigua on Tuesday.
Getty Images
The Telegraph   |   Published 10.03.22, 01:03 AM

England bowlers made timely strikes on Day II of the first Test at North Sound in Antigua after Jonny Bairstow’s 140 propelled the visitors to 311 in their first innings. At tea on Wednesday, the West Indies were 127 for 4, suffering a mini-collapse after captain Kraigg Brathwaite and John Campbell’s brisk opening stand of 83.

Among the England bowlers, Craig Overton accounted for Campbell while Mark Wood picked upBrathwaite, who perished after scoring 55. Ben Stokes then dismissed Shamarh Brooks and Chris Woakes struck at the stroke of tea, removing Jermaine Blackwood.

Resuming on 268 for 6, England lost one of their overnight batsmen Chris Woakes early and Craig Overton thereafter to slip to 285 for 8.

Young pacer Jayden Seales (4/79) removed both of them as it seemed England could fall short of 300. But No.10 batsman Wood hung around for some time with Bairstow, who ensured England could cross 300 and give a decent chance to their bowlers against a fragile Windies batting line-up.

For Bairstow, his performance in the last few months does inspire hopes of a revival of his Test career. Even in the preceding Ashes Down Under, Bairstow was the only England batsman to score a century alongside finishing with the best average (48.50).

For sure his approach and intent against the Australian quicks made him more of an automatic choice in the Test leg of the ongoing Windies tour. However, what also bodes well for England is Bairstow’s remaining passionate about Test cricket and not concentrating solely on the limited overs formats.

“I am very passionate about playing Test cricket. I am absolutely delighted with this century. It has been a good start to the year and hopefully, that can continue,” he said.