The visitors' top order has been a concern, and in an effort to address this issue, skipper Root moved up to No.3 from his usual position of No.4 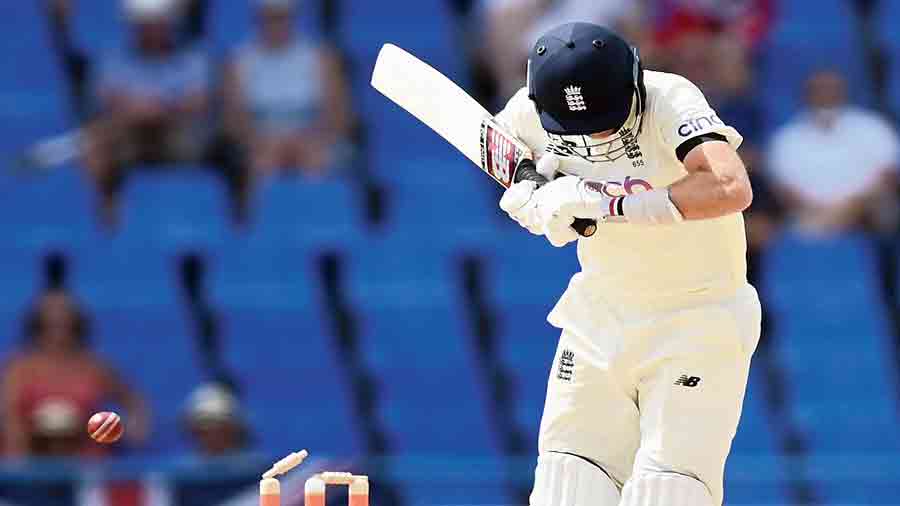 Joe Root is bowled by Kemar Roach (not in picture) on Day I of the first Test against the West Indies in Antigua on Tuesday.
Getty Images
The Telegraph   |   Published 09.03.22, 02:00 AM

Ben Stokes and Jonny Bairstow helped England put up a little bit of defiance in the second session of the first Test versus the West Indies at North Sound in Antigua.

At tea on Tuesday, England were 145 for 5 with Bairstow (35) and wicketkeeper-batsman Ben Foakes (21) at the crease. Stokes was the only wicket the visitors lost in the post-lunch session, as he was bowled by Jayden Seales.

Winning the toss and opting to bat first, England were wobbling at 57 for four at lunch with captain Joe Root, the mainstay of their batting line-up, also dismissed.

All-rounder Stokes and Bairstow, however, showed a fair amount of determination to try and pull their team out of the hole. They put on 67 for the fifth wicket before Stokes departed. Foakes then showed application till the end of the second session.

Earlier, senior pacer Kemar Roach struck twice for the Windies, dismissing debutant opener Alex Lees and then taking the prized scalp of Root to put England under enormous pressure as early as in the ninth over.

England were 27 for three then.

All-rounder and former captain Jason Holder hadn’t conceded a run in his first five overs and also accounted for No.4 batsman Dan Lawrence.Young pacer Seales also took his first wicket,  removing Zak Crawley on the penultimate ball of the fourth over.

England’s top order has been their concern over the few years, and in an effort to address this issue, skipper Root moved up to No.3 from his usual position of No.4. Yet, it didn’t work out.