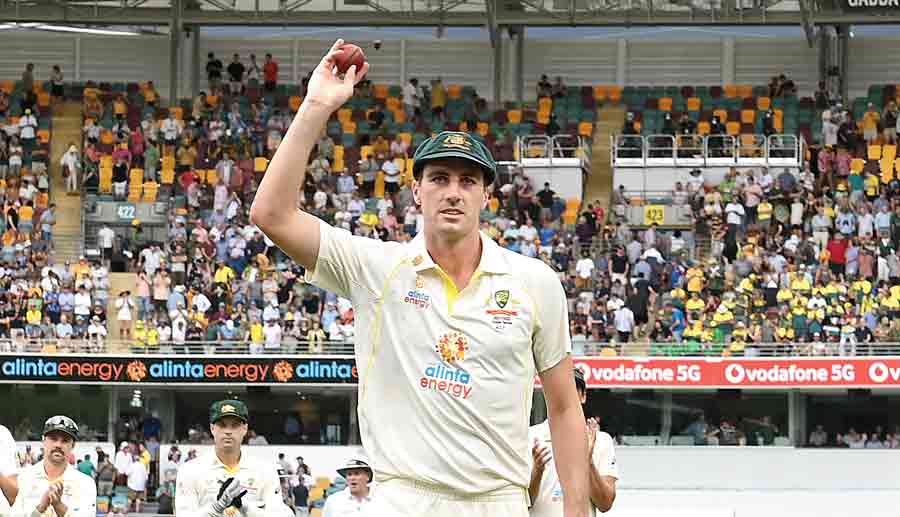 Cummins acknowledges the appreciation from the Gabba crowd, after completing his five-for in his first Test as Australia captain.
Getty Images.
Reuters   |   Published 09.12.21, 03:23 AM

Pat Cummins took a five-wicket haul in a dream start to his Australia captaincy as England were skittled for 147 by tea at the Gabba before rain brought the opening day of the Ashes to an early close.

Australia’s first fast-bowling skipper in 65 years, Cummins shone on a golden day for the home side that began with Mitchell Starc removing Rory Burns off the first ball after Joe Root sent his team in to bat on a grassy wicket.

The play ended with Cummins (5/38) leading his team off the ground to a standing ovation, holding the Kookaburra ball aloft in celebration of his first ‘five-fer’ against the English. “It’s been a good start to my captaincy stint,” said the 28-year-old quick.

“I’m really proud of not only how everyone bowled but I thought everyone stayed really composed.”

The rain capped a gloomy day for England at their traditional house of pain, but they may end up praying for more of it to avert defeat. Their sole victory on Wednesday was when Root called the toss correctly, but his faith in England’s batting was forlorn in the face of a fearsome pace on a muggy, overcast morning.

Burns became the first player dismissed off the opening delivery of an Ashes in 85 years when Starc bowled him down the leg-side. It was an ugly dismissal for the Surrey man, who crab-walked across his stumps and trudged off with his sixth duck of the year, an all-time record for the opening batsman.

Within half an hour he had been joined in the dressing room by Dawid Malan (6) and Root as the metronomic Josh Hazlewood struck twice. Cummins introduced himself after the morning drinks break, dismissing England’s danger man Ben Stokes (5) with a brutish ball that induced a nick to a diving Marnus Labuschagne.

An aggressive Jos Buttler (39) and Ollie Pope combined to rally England but Starc broke their 52-run stand with a delivery that caught Buttler’s edge and sailed to Carey.

Young all-rounder Cameron Green celebrated his first Test wicket when Pope (35) sent a panicky pull which Hazlewood pouched brilliantly in the deep. Cummins cleaned up the tail to complete an inspirational performance, some 10 years on from his Test debut as an 18-year-old, when he took a seven-wicket match haul at the Wanderers to help beat South Africa.

England fans may wake up to a feeling of deja vu, given the team’s record at the Gabba, where they have lost six of the last eight Tests. But Pope insisted the team could still work their way back. “We’re going to keep fighting. “We don’t know how (the wicket) is going to react tomorrow (Thursday).”