The best bowler for Windies was Jason Holder, who delivered eight maiden overs in his total of 14 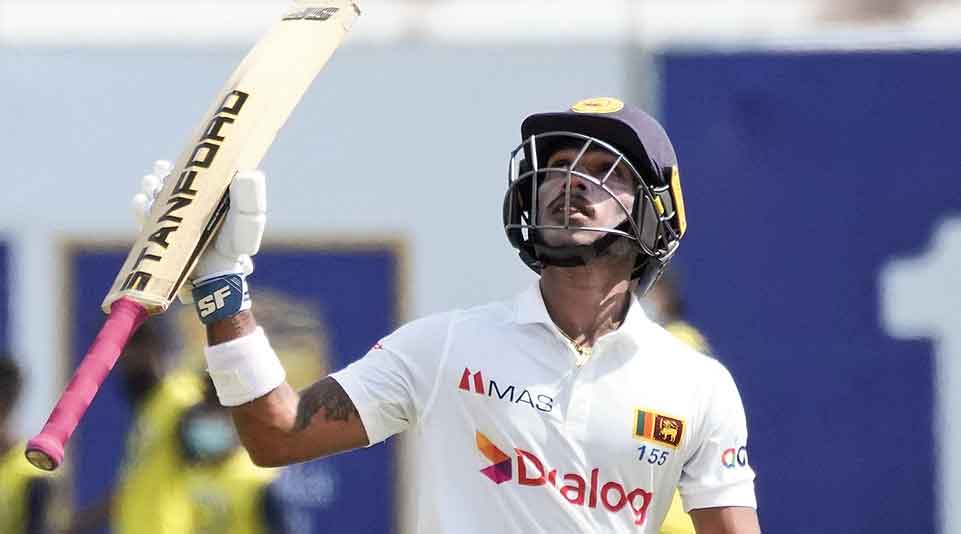 Sri Lanka’s Pathum Nissanka after completing his half-century against the West Indies in the Galle Test on Sunday.
AP/PTI
Agencies   |   Published 22.11.21, 02:02 AM

Sri Lanka opener Dimuth Karunaratne scored a century and Pathum Nissanka added 53 as Sri Lanka reached 267/3 at stumps on the first day of the first Test against the West Indies here on Sunday.

Karunaratne hunkered down in the difficult first session, scored more confidently in the afternoon, and then pressed home Sri Lanka’s advantage in the evening, to go to stumps unbeaten on 132 off 265 balls in his first Test since May. Nissanka and Dhananjaya de Silva also made contrasting fifties, to help their captain bookend the day with big stands.

On a surface that is expected to dry out and take turn by Day III, Sri Lanka’s 267 for 3 represents a substantial advantage for the hosts.

West Indies will rue a number of close and missed chances, none greater than the dropped catch off Karunaratne when he was on 14. Rahkeem Cornwall got a ball to take the outside edge as the batter attempted to open the face. It flew just wide of the wicketkeeper’s gloves, and at a catchable height to the right of slip. Jermaine Blackwood could not get two hands to the ball, though, and grassed it.

Offspin was West Indies’ most effective weapon on Day One, with Roston Chase removing Oshada Fernando and Angelo Mathews, both for 3, after tea. Their best bowler, however, was Jason Holder, who delivered eight maiden overs in his total of 14.

Scans on West Indies debutant Jeremy Solozano, who was taken to hospital after being hit on the helmet while fielding, showed “no structural damage”, the touring side said on Sunday.

Solozano was fielding at short leg when Karunaratne pulled a short delivery from Chase into the grill of the Windies opener’s helmet.

Solozano immediately removed his helmet and lay down, surrounded by worried teammates and both the Sri Lankan batsmen. The 26-year-old was carried off on a stretcher and taken to hospital.

“Jeremy Solozano’s scans show no structural damage. He will be kept at the hospital overnight for observation,” West Indies Cricket said in a statement.