This team has been fantastic. They have shown character, spirit, skill and fitness: Arun Lal 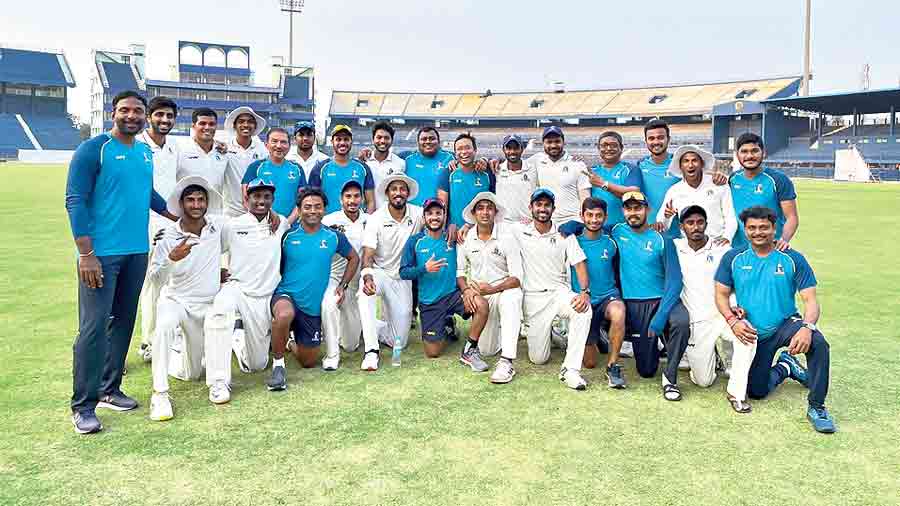 Bengal thrashed Chandigarh by 152 runs in their Ranji Trophy elite group B match to advance to the quarter finals with three wins in a row at the Barabati Stadium in Cuttack on Sunday.

Bengal are the only side among the elite teams to have won all matches in the group phase.

Defending a stiff 413, Bengal bowled Chandigarh out for 260 on the fourth and final day with the pace troika of Ishan Porel (3/37), Mukesh Kumar (2/72) and Nilakantha Das (2/50) sharing seven wickets among them.

Chandigarh No. 9 batter Jaskaran Singh waged a lone battle, remaining unbeaten on 60 as he ran out of partners to be all out in 96.2 overs. Amrit Lubana (57) and skipper Manan Vohra (40) also put up some resistance but they failed to convert their starts as Bengal bowlers kept taking wickets at regular intervals.

Chandigarh had a watchful start after they resumed the day on 14/2. Skipper Vohra and Gaurav Gambhir (19) saw off the opening hour’s play with their dogged approach. Mukesh Kumar gave the first breakthrough before the likes of Porel and Das got into the act. Shahbaz Ahmed, Sayan Sekhar Mondal and Anustup Majumdar also returned among wickets, bagging one each.

From being shot out for 88 in their first match against Baroda, it has been a remarkable turnaround for Bengal who won all their three matches to finish on top of group B with 18 points and seal their last-eight berth.

“This team has been fantastic. They have shown character, spirit, skill and fitness, and kept themselves motivated to reach the top of the table,” head coach Arun Lal said.

Bengal needed just three points from the last round to qualify for the knockouts. “It was not a must win match for us to reach the knockouts but still the boys worked very hard to win this game. It keeps the winning habit with us, the momentum intact and keeps us confident,” Lal said.

The coach had a special mention for the bowling unit. “I have been saying this for a long time that our bowlers have been performing endlessly for us, they have set very high standards for themselves and they live up to it. We depend on them, hats off to them. In this match we got almost three hundreds, our No. 8 stayed unbeaten on 97, this really augurs well for our batting unit,” Lal concluded.

Mumbai stormed into the Ranji Trophy quarter finals for the first time since 2017-18 season after an innings and 108-run win over Odisha in their Group D match here on Sunday.

Having conceded a mammoth 248-run first innings lead, Odisha resumed the final day on 84 for 5 before the Mumbai spin duo of Shams Mulani (5/64) and Tanush Kotian (3/31) ran through their lower order.

They were all out in 15 overs on the final day, before the first drinks break was taken. With the bonus point victory, Mumbai ended the group phase with 16 points, three ahead of Saurashtra who failed to make the cut despite their big 211-run win over Goa.

Left-arm spinner Mulani ended the league phase on top of the bowling chart, with 29 wickets from three matches.