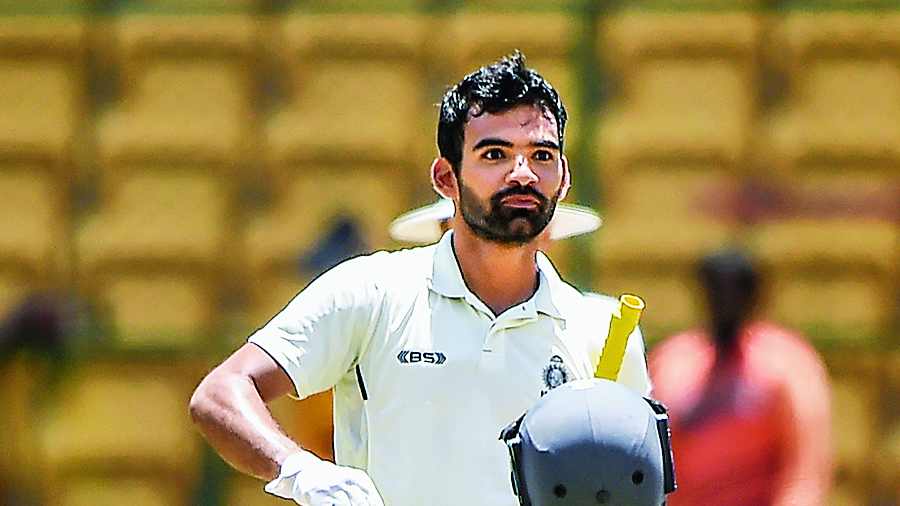 adhya Pradesh’s Yash Dubey celebrates after completing his century on Day III of the Ranji final against Mumbai in Bangalore on Friday
PTI
The Telegraph   |   Bangalore   |   Published 25.06.22, 12:49 AM

Madhya Pradesh have never won the Ranji Trophy, but on Friday they took a massive step towards securing their maiden title. And for that they will have to thank Yash Dubey and Shubham Sharma.

Dubey (133 off 336 balls) and Sharma (116 off 215 balls) added 222 runs for the second wicket. At the end of Day III, Madhya Pradesh were 368/3, just 6 runs short of Mumbai’s first innings total of 374. The way the match has progressed so far, the team which takes the first-innings lead will probably go on to win the trophy.

Madhya Pradesh had lost to Karnataka the last time they competed in a Ranji final, in the 1998-99 season.

The 23-year-old Dubey and Sharma, 28, took the sting out of Mumbai’s attack with some stubborn batting. Madhya Pradesh coach Chandrakant Pandit, a former Mumbai player himself, surely has a hand behind such ‘khadoos’ batting. Only 245 runs were scored during the day, but it was enough to take the steam out of Mumbai.

While Dubey hit 14 boundaries and Sharma had 15 hits and a six to his credit, what stood out during their partnership was their running between the wickets. That Dubey (613 runs) and Sharma (578 runs) have been standout performers for Madhya Pradesh this season was evident in their on-field communication, where they would tap the ball towards mid-on or mid-off to steal those quick singles.

Rajat Patidar, one of the heroes of Royal Challengers Bangalore’s campaign in the IPL, looked confident as he was unbeaten on 67 with 13 boundaries at the close of play.

Madhya Pradesh would certainly want to stretch their innings as much as possible so that Mumbai have no chance to make a comeback. That will also help them go for an outright win though the Chinnaswamy Stadium track hasn’t shown any signs of wear and tear so far. Mumbai might still hope for a miracle, but the chances of that are almost non-existent.