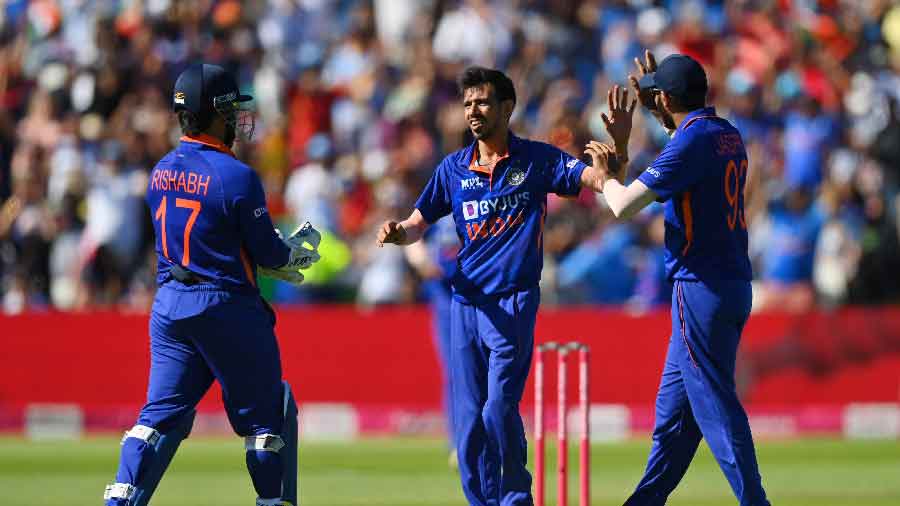 Batting first, India once again showed a start-to-finish aggressive intent while reaching 170 for eight riding on new 'batting all-rounder' Ravindra Jadeja (46 not out off 29 balls) after a sudden collapse during the middle-phase on a track full of pace and bounce.

With the ball, Bhuvneshwar Kumar's (3/15) new found rhythm in the powerplay overs was superbly complemented by the skilful duo of Jasprit Bumrah (2/10) and Yuzevndra Chahal (2/10) as England innings imploded for a meagre 121 in 17 overs.

If India's batting has been very good in both the games, the bowling has simply been outstanding with complete domination in the powerplays.

Since he got full-time captaincy, the Indian team is yet to lose a match under him. There has been three clean sweeps -- New Zealand (3-0), West Indies (3-0), Sri Lanka (3-0) and a fourth against England in the current one looks imminent.

With three months left for the World T20, the playing XI on Saturday gave a glimpse of what could be the batting order and its philosophy going forward.

Rishabh Pant's (26 off 15 balls) elevation as an opener alongside skipper Rohit (31 off 20 balls) is a welcome move where the team at least wouldn't be erring in the side of caution in the powerplay overs.

In between the duo, they hit seven fours and three sixes in the first six overs, an approach that was missing during last T20 World Cup.

The strategy is to not stop playing the shots even if wickets fall at one end and Virat Kohli (1 off 3 balls) did feel the peer pressure and the mis-timed skier showed his desperation.

But the most impressive aspect came to fore from 89 for five, as India still managed to reach 170, courtesy Jadeja, who didn't have a great time in T20 cricket having had a torrid time in CSK during IPL, where he lost form and fractured relationships.

With strong indications that he will leave CSK next year, Jadeja seemed to be playing with a free mind and it was evident that even as wickets fell at the other end, there was no letting up in his strokeplay as the scoreboard had a competitive feel to it.

The swing is back

A good Indian white ball team has always had Bhuvneshwar as an important component in the set-up.

In the first game, it was a banana inswinger that castled rival captain Jos Buttler and on Saturday, a classical outswinger first up saw Jason Roy edging it to the slip cordon.

The wily Bhuvneshwar then asked Pant to come up to the stumps to stop Buttler from giving the charge and the result was a lazy under-edge into keeper's gloves.

Liam Livingstone (15) with a helmet-cam was fooled by a Bumrah slow off-cutter that took ages to jag back and knock the bails off.

Harry Brook had a couple of boundaries but when Chahal tossed one up, he took the bait but couldn't get the execution right.

Moeen Ali (35) did hit some shots but England lost wickets at regular intervals as Rohit brilliantly used his bowlers.

With three wickets down, he unleashed Chahal and just when Moeen was trying to take the game away, he got in Hardik Pandya, who got him a breakthrough.

Team's weakest bowling link Harshal Patel (1/34) was brought towards the end when they were well course to win the game.

Stars back, it’s time to decide on perfect XI