Stars back, it’s time to decide on perfect XI 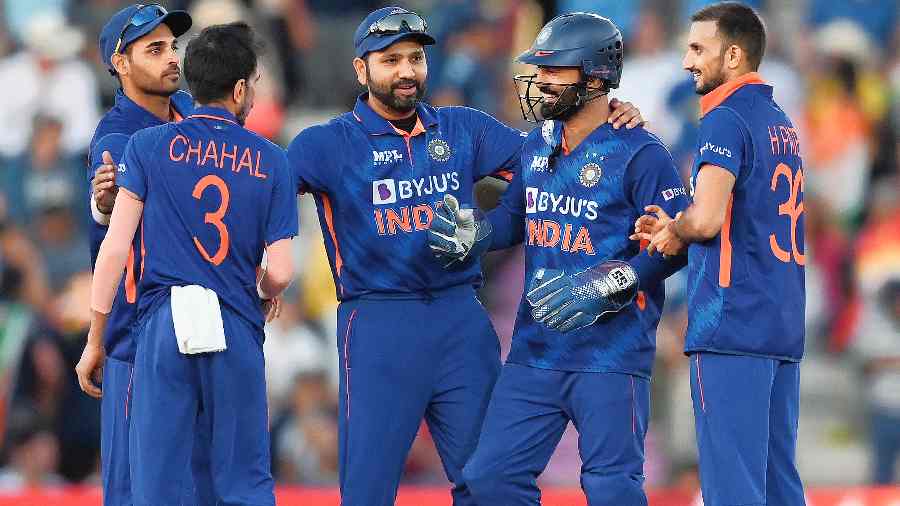 India captain Rohit Sharma celebrates with teammates after Moeen Ali’s dismissal in the first T20I against England at the Ageas Bowl in Southampton on Thursday.
Getty Images
Our Bureau   |   Calcutta   |   Published 09.07.22, 01:02 AM

One enterprising change in the Indians’ approach in the opening T20I in Southampton was their ability to show intent from the outset. So much so that they reached 66 for 2 in the Powerplay overs after choosing to bat and then, with the ball, reduced England to 32/3 in their first six overs. Dominating the Powerplay overs played a huge role in India coming up trumps by 50 runs.

“We have spoken about it a lot,” captain Rohit Sharma said at the post-match presentation on Thursday. “There is a certain approach we want to take. Yes, sometimes it comes off, sometimes it doesn’t, but you have to keep backing yourself to do that again and again. That’s why it is so challenging, because you can’t keep coming and doing the same thing every now and then.

“It is something we have spoken about, and all the players need to buy into it. Not just one or two players who understand what they want to do, but the whole batting unit coming together and understanding where the team wants to go. Guys seem to be pretty clear with that message.”

But coach Rahul Dravid, who will take charge from NCA head VVS Laxman, faces a huge task as the regulars will stake their claim in the second match at Edgbaston on Saturday. Virat Kohli, Rishabh

Pant, Shreyas Iyer, Ravindra Jadeja and Jasprit Bumrah will be back in the mix and will look to start afresh after the Test loss.

Ishan Kishan failed but the likes of Rohit, Deepak Hooda, Suryakumar Yadav and Hardik Pandya came good with the bat on Thursday. It remains to be seen who will sit out to accommodate Kohli or Iyer. Dinesh Karthik may also have to make way for Pant and it could be a tussle between Jadeja and Axar Patel for the left-arm spinner’s berth.

India have their star players, barring KL Rahul, available for Saturday’s clash and this is bound to disturb the continuity. There is perhaps no place for finisher Karthik and Pant together unless India play Pandya as the third specialist seamer. Should they go with Pant, it remains to be seen if Pandya continues at No.5, who batted well in the position in the opening T20I.

The team management will have to chop and change the XI consistently before deciding on the final combination ahead of the World Cup in October-November.