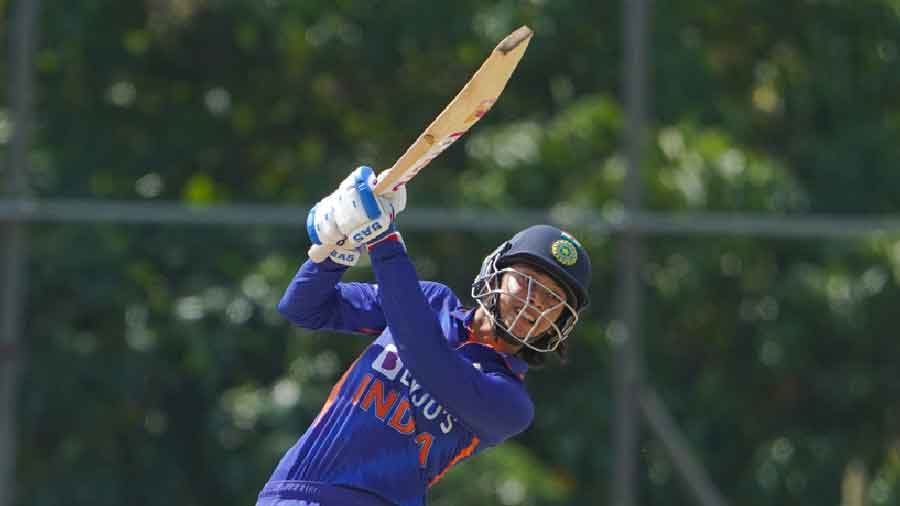 The graceful Smriti Mandhana once again enhanced her reputation as one of India's biggest match winners with an attractive 91 that literally decimated England by seven wickets in the opening WODI, here on Sunday.

Harmanpreet Kaur won a good toss and veteran India pacer Jhulan Goswami was accuracy personified with 42 dot balls in one of of her last international games as England managed a sub-par 227 for seven, largely due to efforts from the lower middle-order.

India were never in trouble during the chase as Mandhana (91 off 99 balls) literally drove and pulled her way before missing out on a deserving sixth WODI hundred by nine runs.

But by the time she was dismissed, Mandhana ensured a 45th over finish for the Women In Blue, who now go 1-0 up in three-match series.

Yastika Bhatia (50 off 47 balls), who hasn't done justice to her enormous talent, also notched up her third half-century and scored at more than run-a-ball strike-rate.

Yastika-Mandhana second wicket stand of 96 in just 16.1 overs set the foundation and then Harmanpreet (74 not out in 94 balls) eased her way to a another fifty as she added 99 runs with her deputy and then finished it off in style with a slog sweep six.

Mandhana's innings had 10 fours and a lovely six over long-on off seamer Issy-Wong.

While both Yastika and Mandhana drove majestically through the covers during the Powerplay, the Indian vice-captain also played a lot of pull-shots with English bowlers drifting down the leg-side.

It must be said that Harmanpreet read the conditions at the County Ground in Hove way better than her England counterpart Amy Jones.

While Indian spinners Rajeshwari Gayakwad and Deepti Sharma varied pace of their deliveries to make strokeplay difficult, England's seamers Kate Cross (2/43 in 10 overs), Alice Davidson-Jones (0/48 in 7.2 overs), Wong(0/35 in 5 overs) along with off-spinner Charlie Dean (1/45 in 10 overs) allowed the visiting team batters to use the pace of their deliveries to score runs behind the square.

In the first 15 overs, India hit 13 fours and a six (by Yastika) and it was all over for England.

Earlier, Goswami, the 39-year-old legend, was parsimonious, giving away only 20 runs in 10 overs with as many as 42 dot balls.

She didn't concede a single boundary or six and also bowled a fine off-cutter to get rid of the seasoned Tammy Beaumont (7).

On a track where ball wasn't always coming onto the bat, India captain Harmanpreet Kaur did the correct thing by opting to field.

Dani Wyatt (43 off 50 balls), Alice Davidson-Richards (50 not out off 61 balls) and Sophie Ecclestone (31) were the notable contributors for England.

Even Charlie Dean played a nice cameo (24 no off 21 balls) towards the end to beef up the target.

Harmanpreet will be a touch disappointed that despite getting England on the mat at 128 for 6 by the 34th over, England's Nos. 7, 8 and 9 added more than 100 runs to give the total some respectability.