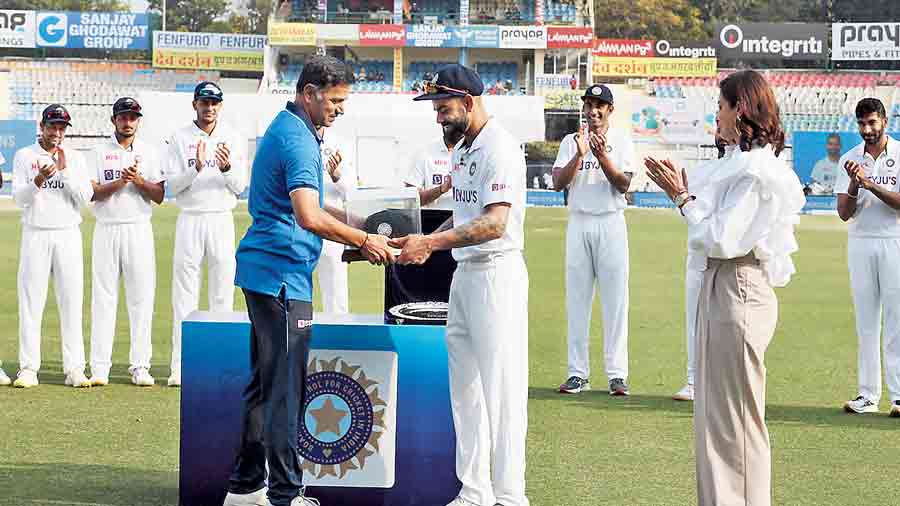 Virat Kohli is, in his own words, usually not too bothered about personal milestones and records. But when India head coach Rahul Dravid asked him on Friday morning about his feelings going into his 100th Test, the 33-year-old acknowledged feeling like a nervous debutant.

“Well, it felt like I am making my debut... Had butterflies in my stomach... I did feel a bit nervous,” Kohli, who was felicitated by the BCCI before the start of the day’s play in Mohali, said later.

On Day I against Sri Lanka, Kohli looked good to go past a half-century the way he had paced his innings in the milestone game, till a little bit of extra turn from left-arm spinner Lasith Embuldeniya brought about his departure. The former India skipper fell just five short of a fifty.

Kohli, however, doesn’t want to read much into not being able to get a big score once again. “I’ve been preparing exactly the way I’ve been and as long as I’m batting well, I’m not bothered at all.

“From a worldly point, people look at milestones and they talk about a lot of things,” Kohli said. “Even today (Friday), my partnership of 90 runs with Hanuma (Vihari) was important for us after we were two down for 80.

“We’re somehow crazy about milestones and materialistic achievements. I personally don’t think like that. I’m batting well and that’s the most important thing for me.”