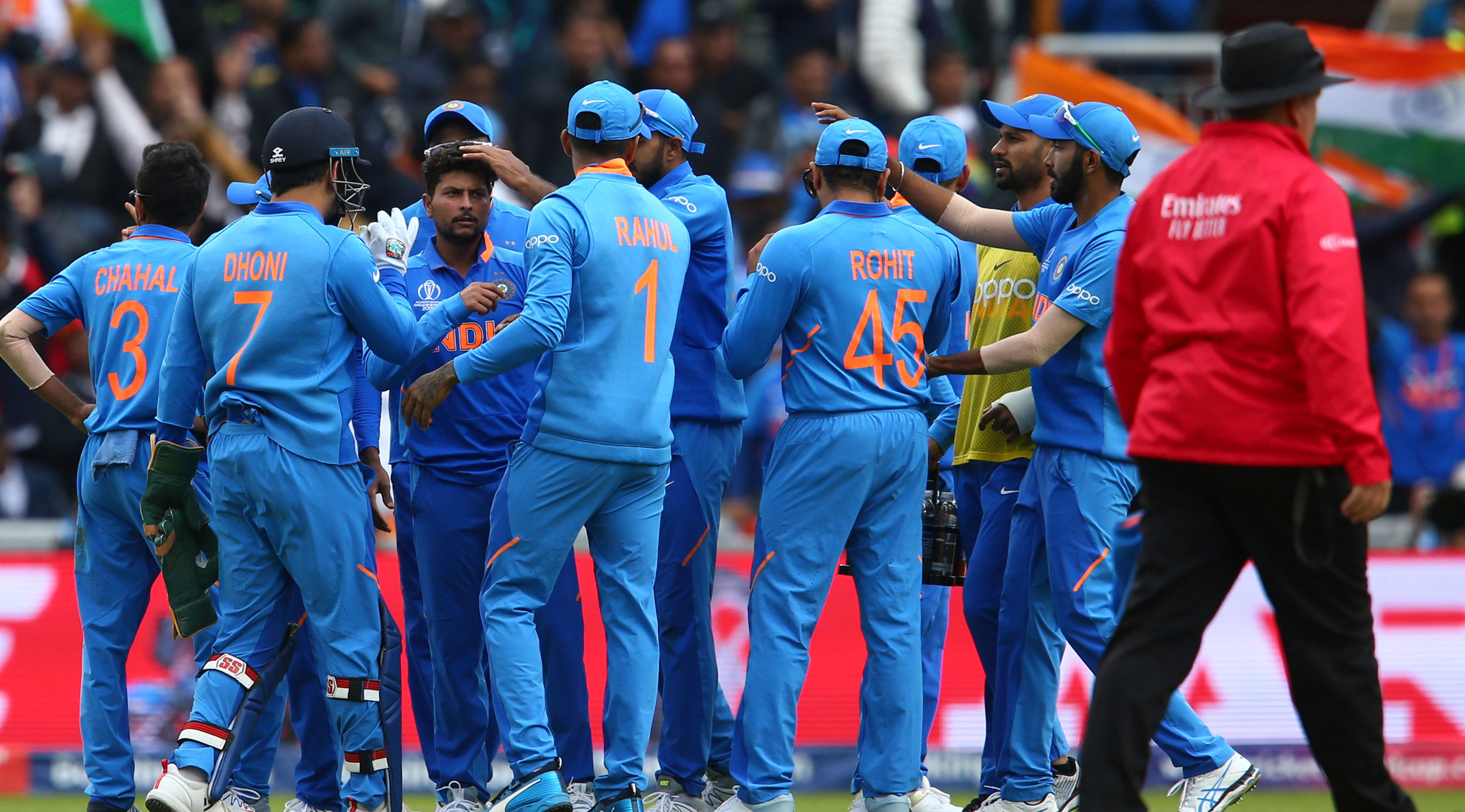 Kuldeep Yadav (third from left) celebrates with his teammates after taking the wicket of Pakistan's Babar Azam during the ICC Cricket World Cup match between India and Pakistan at Old Trafford in Manchester, England, on June 16, 2019.
(AP)
Indranil Majumdar   |   Manchester   |   Published 16.06.19, 09:28 PM

The drive from the heart of the city near Manchester Piccadilly Station to Old Trafford cricket ground could take as little as 15 minutes or as long as 30 minutes depending on when one is travelling.

On a match day, it’s completely different though. Streets, lined with pretty-as-picture buildings, are cordoned off at every turn alongside the stadium.

The residents in this sleepy part of an otherwise vibrant city woke up to the blowing of horns and conch shells, and the beating of drums reverberating in thin air.

There were the Indian and Pakistani flags flying in unison with fans of both countries mingling around freely and posing for selfies, dualfies and groufies.

Their bonhomie and feeling of brotherhood was not to be missed despite the intense rivalry on the field.

Sudden bursts of rain did spoil the Sunday party somewhat, but by the end of the day, the Indians had their share of fun and frolic. Never for a moment did it look like India were under any threat to lose their all-win record against Pakistan in World Cups. And they didn’t, winning the match comfortably in the end.

India were handicapped once Bhuvneshwar Kumar hurt his hamstring and was forced out of the match. He slipped on his front foot and landed awkwardly in his third over. Vijay Shankar completed his unfinished over and provided the breakthrough with his first ball in a World Cup.

The 337-run target was always going to be tough in such high-pressure situations and losing Imam-ul Haq in the fifth over only complicated matters.

Fakhar Zaman and Babar Azam then forged together a 104-run partnership but Kuldeep Yadav produced a gem of a delivery to open the floodgates. Babar was stunned by the left-arm wrist spinner’s dip and played the wrong line.

Fakhar, who threatened to repeat his exploits in the Champions Trophy final with a well-composed 62 off 75 balls, was Kuldeep’s victim in the next over.

Mohammed Hafeez and Shoaib Malik were sent back by Hardik Pandya off consecutive deliveries and Pakistan had lost four wickets within 12 runs.

The writing seemed to be on the wall and Sarfaraz Ahmed’s dismissal a little later almost put it beyond Pakistan.

At 166 for six and a rain–induced stoppage later, Pakistan were left needing to get 136 off five overs according to the DLS Method. Imad Wasim and Shadab Khan were content with playing out the overs as India won by 89 runs.

At the end of India’s innings, there was only one winner: Rohit Sharma.

Rohit’s superb 140 off 113 balls, his second in this World Cup, showed his maturity and the ability to excel on big occasions.

The ruthless pulls and delicate cuts fetched most of his 14 boundaries and three sixes but there was also the square and cover drives for variation. He was dismissed going for an ambitious scoop.

Rohit and his new opening partner Lokesh Rahul made the most of the circumstances after being put into bat. It was a tricky decision, considering the chilly and windy conditions.

The openers didn’t show any rustiness except on one occasion when Rohit survived a run-out call, following a mix up, on 32.

Rahul took time to accelerate but laid the foundation during the 136-run partnership. Once he departed for 57, Virat took charge.

There was nothing to suggest that Pakistan had a positive approach on the field. The field placements were defensive and the body language of the players hardly showed any signs of aggression.

Virat’s innings of 77 of 65 balls was overshadowed by Rohit to an extent, but the India captain completed 11,000 ODI runs in his 222nd innings, the fastest to reach the milestone.

His dismissal off Aamir’s short delivery could be debated, but he walked off before the umpire raised his finger.

The rain break did play its part in disturbing India’s momentum, but 336 proved to be good for the day.