'Stokes' of a genius in England victory

Ben scores an unbeaten quickfire half-century, picks up crucial wickets to guide his team to a comprehensive 113-run win 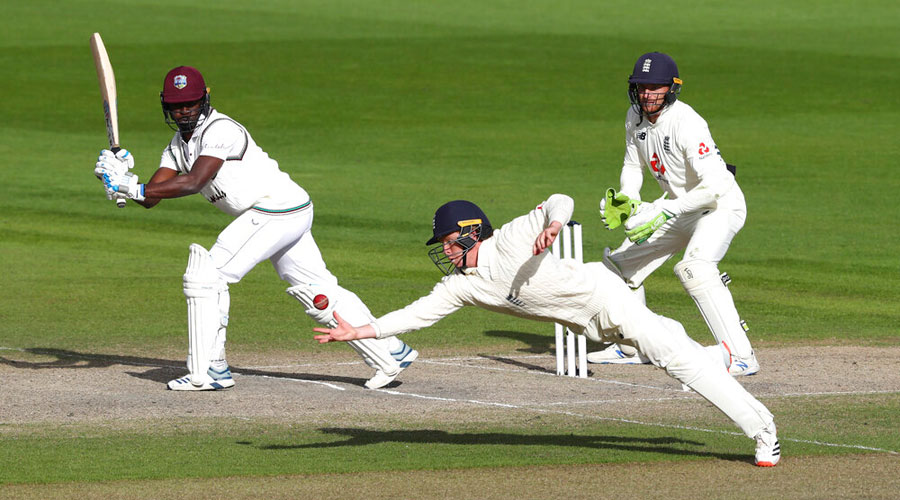 Ollie Pope takes a catch to dismiss Kemar Roach of the West Indies as England win the second Test at Old Trafford on Monday.
AP
Our Bureau & Agencies   |   Calcutta, Manchester   |   Published 21.07.20, 01:11 AM

Ben Stokes came up with crucial contributions with both bat and ball to lead England to a 113-run win over the West Indies late on the final day of the second Test at Old Trafford, with the three-match series now level at 1-1.

With this victory, England have certainly given themselves a fair enough chance of regaining the Wisden Trophy.

Needing to bat out 85 overs to salvage a draw and retain the Wisden Trophy, West Indies were dismissed for 198 with 14.5 overs and an hour left of the Test.

The third Test starts on Friday and will be held at the same venue.

England set West Indies an unlikely victory target of 312 after declaring 11 overs into the day, having quickly added 92 runs — chiefly through Stokes — to get to 129/3.

Quickly getting into limited-overs mode, the swashbuckling all-rounder smashed an unbeaten 78 off 57 balls to follow up his first innings knock of 176.

“He went through a range of gears and played the situation. He doesn’t surprise me, though. If you watch how he goes about his business in training and practice, he leads the way.

“He just wants to get better and better, and it’s great for a lot of young guys coming in to see that,” Root emphasised.

The Windies were reduced to 37/4 after 15 overs of their second innings, but a fifth-wicket stand of 100 between Shamarh Brooks and Jermaine Blackwood instilled hopes of a draw. But then Stokes struck just when England needed it the most, accounting for Blackwood in the last over before tea.

The Windies lower order did put up a defiance, but England chipped away with wickets to take the series to a decider.

In what appeared to be a worry for England ahead of the final Test, Stokes failed to complete his 15th over of the innings because of an apparent muscle strain.

Stokes, though, said it was nothing too serious. “I am fine. Just probably sad to get stiff and when I said that to Broady (Stuart Broad), he asked me to stop. I had the same sort of stiffness three-four years back against Pakistan, so didn’t want to take that risk again,” he stated.

Stuart Broad too played a very important role in England’s victory, picking up three wickets as he and Chris Woakes ripped through the Windies top order.

The Windies batters looked clueless when Broad pitched the ball on the off stump region and brought it back in. That angle made life really difficult for the visitors.

Broad first removed opener John Campbell who was caught behind in the first over, while Shai Hope walked back to the pavilion after seeing a delivery seam off the pitch and strike the top of his off stump. He then trapped Roston Chase leg-before soon after lunch.

“You expect that from Stuart. He put up a great performance in the first innings and today as well.

“We always feel that he has a long career ahead,” Root said.

Meanwhile, Stokes doesn’t feel that his team is overusing him. “Absolutely not. I do everything the team asks of me and we have found the method of playing dry cricket with the field.

“Not only does it give us a wicket, it also keeps the run rate in check because the batsmen can’t get away.

“In the first innings, it just came about. We didn’t feel there was any lateral movement off the pitch or anything.

“Bouncing six balls into the wicket is a plan we use in Tests,” Stokes added.