West Indies fail to show resistance in front of a resilient pace bowling line-up, lose the 3rd test by 269 runs 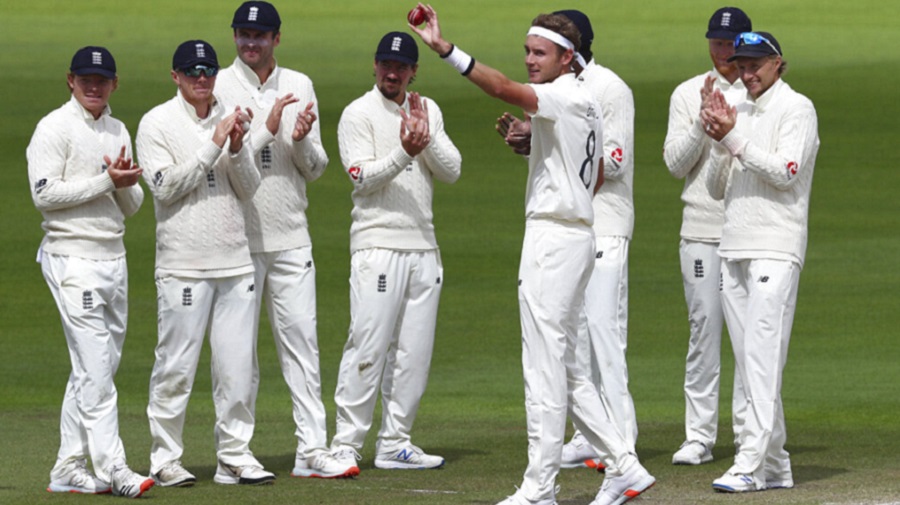 Stuart Broad joined the elite club of players with 500-plus wickets in Test cricket and England thrashed the West Indies by 269 runs in the deciding Test at Old Trafford on Tuesday to seal the series 2-1.

Broad took four wickets in the second innings with a match-haul of 10 — also his first since 2013 — while Chris Woakes had a five-fer as the Windies were bowled out for a paltry 129. Courtesy Broad and Woakes, the washout on Day IV didn’t factor enough as it took England just more than a session on the final day to register the series win.

As for the Windies batsmen, they failed to show even a bit of resistance and handed the series over to England despite washouts and rain delays in both the second and the third Tests.

It was also the first time since 1912 that England pacers took 50 wickets in a three-match series. But all said and done, special credit does go to Broad, who proved a point from the second Test itself, especially after he was surprisingly omitted from the opening game in Southampton.

Being the seventh bowler to reach the 500-wicket mark in the traditional format, Broad reached the milestone when he trapped Kraigg Brathwaite lbw, matching the achievement of his new-ball partner James Anderson.

Brathwaite, incidentally, was also Anderson’s 500th Test victim, when the latter dismissed him at Lord’s three years ago.

“What a stat that is! Jimmy told me during the warm-up, ‘You know who it’s going to be?’ And then told me his 500th victim was Brathwaite.

“The stars have to be aligned for that to happen! I think that’s going to be a quiz question for many years to come,” Broad told Sky Sports.

“When you get a milestone and put in performances, you want them to lead to wins. So to get to 500 on a day we managed to win a Test match and a series, it feels great, very special,” Broad added.

Importantly for England, Broad says he still feels fresh and is keen to replicate his super stuff versus Pakistan, Joe Root and his teammates’ next opposition in the Test arena.

The Tests versus Pakistan begin from August 5.

“I’ve never really set any targets and I’ve learnt a huge amount through my career. But what pleases me at the moment is that I feel so fresh and excited to play the game, and I’ve done some technical work that makes me feel in a great rhythm,” Broad emphasised.