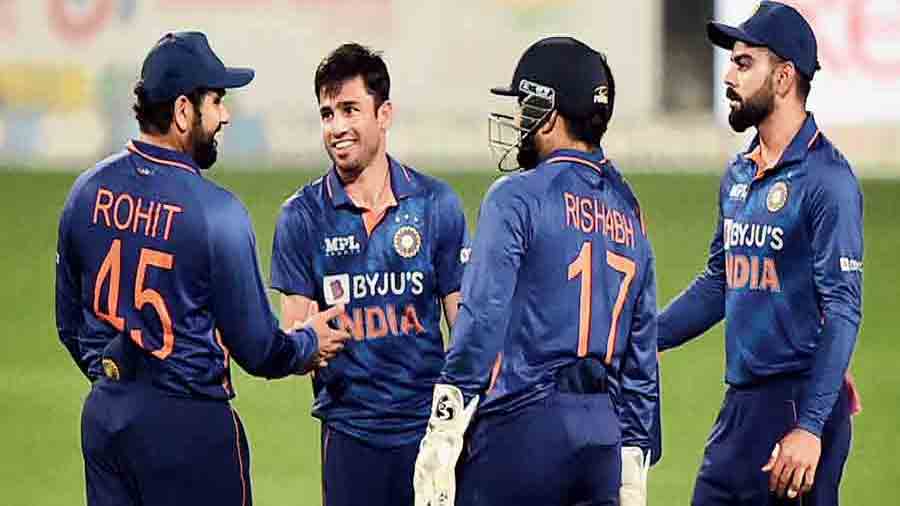 An eerie silence greets you near the Club House. The familiar roar is missing with only a smattering of onlookers witness to the spectacle. Welcome to the new-look Eden Gardens on Wednesday evening.

The razzmatazz inside the ground though was not to be missed.

Team India carried the momentum from the ODI series in to the opening T20I with Suryakumar Yadav and Venkatesh Iyer’s unbroken 48-run partnership off 26 balls enabling them to pull off a six-wicket victory with seven balls remaining. This was after Ravi Bishnoi’s matured bowling on debut restricted the West Indies total.

The 158-run target was supposed to be easy once Rohit Sharma and Ishan Kishan blazed to a 64-run opening stand. Rohit was on song at his favourite venue, slamming four boundaries and three sixes on way to 40 off 19 balls. Kishan (35 off 42 balls) was slightly guarded at the outset but came into his own after Rohit’s departure.

Virat Kohli looked in his elements during his 17 but departed going for an ambitious lofted shot against Fabian Allen. A little caution would surely have helped since there was no need to go down the track.

Rishabh Pant left 12 balls later, a result of another pre-determined aggressive approach, prompting Sheldon Cottrell to bring out his trademark salute. India had been reduced to 114 for four in the 15th over. A few dot balls suddenly piled the pressure on India. What was destined to be an easy victory suddenly appeared to be tougher.

Surya and Iyer struggled for a while, but once they got going, it was curtains for the visitors.

The West Indies stuttered at the start but staged a recovery in the middle overs through Nicholas Pooran before lusty hitting in the closing stages by Kieron Pollard propelled them to 157 for six.

Rohit’s decision to chase was perhaps prompted by the dew factor. It didn’t stop Bishnoi (4-0-17-2) from making a grand debut on the slow and low surface. The West Indies batsmen’s inexperience against the slow bowlers showed as wickets fell in a heap. Only Pooran put up a challenge during his 61 off 43 balls.

These are early days but it wouldn’t come as a surprise if Bishnoi, 21, does make it to the squad for the T20 World Cup. The Jodhpur-born wrist spinner showed promise and tied the batsmen down with his control and discipline. Perhaps getting the chance to work with Anil Kumble during his days with Punjab Kings has sharpened his skills.