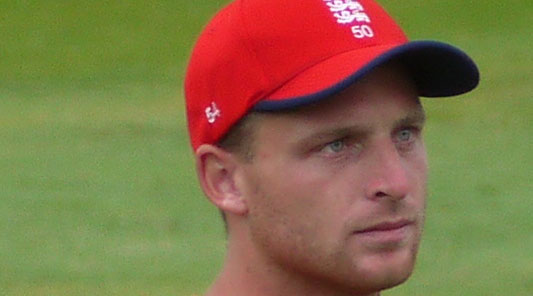 England beat Australia by six wickets in the second T20I as Jos Buttler anchored the run chase to help the home side clinch the three-match series at the Ageas Bowl on Sunday.

Set a target of 158 to win, Buttler, opening the innings, remained unbeaten on 77 off 54 balls, which included eight boundaries and two sixes, as England won with seven balls to spare to take an unassailable 2-0 lead in the series.

“When Jos Buttler is in the form he is, he’s one of the best players in the world,” England skipper Eoin Morgan told BBC. “Australia actually bowled and fielded well today, but there are some batsmen in the world who can take the game away from you and Jos is one of those.”

England lost opener Jonny Bairstow early when he hit the stumps trying to pull Mitchell Starc. But Buttler and Dawid Malan (42) kept the scoreboard ticking with an 87-run stand before spinner Ashton Agar had the left-hander caught in the deep.

Tom Banton and Morgan fell cheaply, but all-rounder Moeen Ali came in and relieved the pressure with a six and a four in the penultimate over to change the equation before Buttler smashed the winning runs with a six down the ground.

“When you fail to get one of the openers out, who’s a great player, you miss out,” Australia captain Aaron Finch said.

“We thought if we matched their Powerplay, we could come out on top, but we didn’t pick up enough wickets.”

The obvious Man of the Match for such a commanding knock on a tricky wicket, Buttler agreed that the opening slot was the best place to bat in T20 cricket.

“It’s certainly the best place to bat in T20s… The wicket also got a bit better and that was a manageable target.

“The guys bowled well earlier and pegged them back. If we got through the opening two-three overs and settled down, we would have our way. I got a partnership going with Dawid and that set us up,” Buttler said.

Opting to bat first after winning the toss, Australia were held to 157/7 after Jofra Archer and Mark Wood struck in their first overs to remove David Warner for nought and Alex Carey (2) respectively, while Steve Smith was run out for 10 of a direct hit from Morgan.

Finch (40) and Marcus Stoinis (35) stitched together a 49-run partnership, while Glenn Maxwell scored a quick-fire 26 off 18 balls to give Australia a respectable total to defend.

England can leapfrog Australia and take the top spot in the T20I rankings if they win the final match and sweep the series 3-0 on Tuesday.