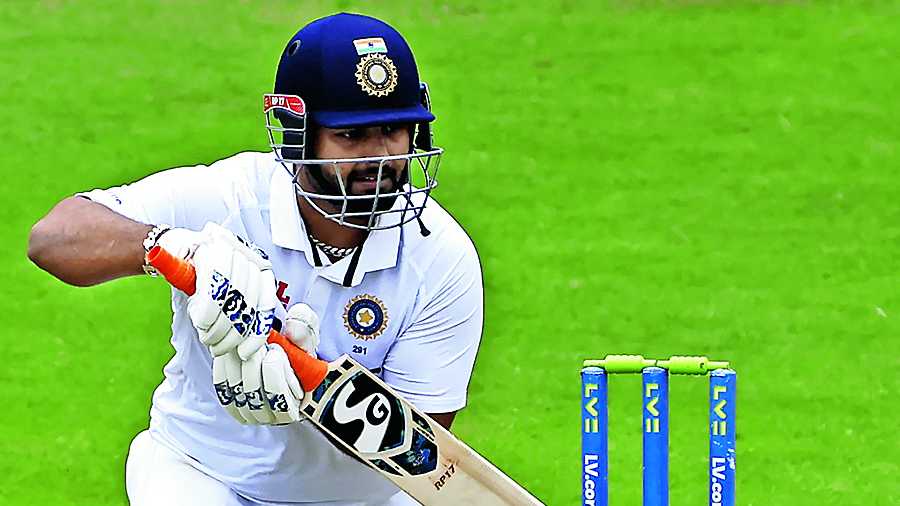 India wicketkeeper-batsman Rishabh Pant at the crease for Leicestershire on Day II of the warm-up match in Leicester on Friday
Twitter
Our Bureau   |   Calcutta   |   Published 25.06.22, 12:41 AM

The Indians gained a two-run lead over Leicestershire in their four-day warm-up game at Grace Road in Leicester on Friday.

The visitors declared at their overnight score of 246 for eight and Leicestershire were bundled out for 244 with Mohammed Shami and Ravindra Jadeja claiming three wickets each. Shardul Thakur and Mohammed Siraj got two each.

Rohit Sharma’s men were 80 for one in their second innings at close on Day II. Shubman Gill was dismissed for 38. KS Bharat (31 batting), the other opener, and Hanuma Vihari (9 batting) were at the crease.

Gill was in an attacking mood, hitting eight boundaries during his 34-ball stay at the wicket.

This is the only practice match for the Indians ahead of their rescheduled final Test match against England at Edgbaston from July 1.

Cheteshwar Pujara, Rishabh Pant, Jasprit Bumrah and Prasidh Krishna are representing Leicestershire in the warm-up match. The agreement was reached upon by both boards and the county in order to allow all members of the travelling party to participate in the fixture.

Shami gave India a bright start on the second day.

The fast bowler struck twice early in the morning session to dismiss opener Sam Evans and Cheteshwar Pujara. After getting captain Evans caught at first slip off Virat Kohli, Shami castled Pujara for a duck.

The good length delivery from Shami climbed a bit on Pujara, who got an inside edge back on to his stumps. After the dismissal, both Pujara and Shami exchanged a smile, and the India pacer gave Pujara a hug while he was walking back to the dressing room.

Rishabh Pant looked impressive in his first outing with the bat on this tour as the wicketkeeper-batter smashed 76 off just 87 deliveries. An incredibly entertaining innings from the 24-year-old provided the motley gathering something to cheer about. Among all his shots, a scoop-flick off Umesh Yadav stood out.

Pant bent down on one knee and flicked it for a six over long leg to bring up his half-century. He also hit a couple of smashing cover drives off Shami’s bowling.

After reaching his fifty, Pant started to score at a rapid pace. He made 25 off just 9 balls hitting Siraj and Umesh for boundaries and raced to 76 off 82 balls. He was finally dismissed trying to slog sweep Jadeja for a six and ended up getting a top edge.

Earlier on Day I, Bharat was the bright spot with the bat for India after the top order fell cheaply. Virat Kohli made a well-compiled 33, but fell to a leg before decision. Bharat remained unbeaten on 70.