Chasing a steep target after Australia posted 294/9 in 50 overs, England suffered an early disadvantage when they lost 2 quick wickets 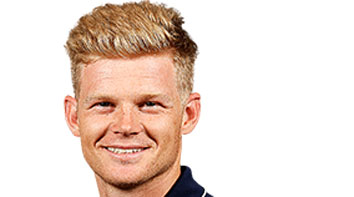 Sam Billings and Jonny Bairstow played well for England but it was not enough as Australia won the first ODI of the three-match series between the two teams by 19 runs at Old Trafford on Friday.

Chasing a steep target after Australia posted 294/9 in 50 overs, England suffered an early disadvantage when they lost two quick wickets in the form of Jason Roy (3) and Joe Root (1). Both wickets were claimed by Aussie pacer Josh Hazlewood. Thereafter, the hosts never managed to get the required momentum in the chase and finished on 275/9.

Bairstow fought for a long time to make 84 off 107 balls but was out just when he could have pressed on the accelerator.

Billings played a superb knock, making 118 off 110 balls, and kept England’s hopes alive almost till the end. But there wasn’t enough support from the other England batsmen.

Earlier, Glenn Maxwell and Mitchell March put on a 126-run partnership to lead Australia out of trouble.

Australia were wobbling at 123/5 in the 24th over when Maxwell, whose last ODI was the World Cup semi-finals loss to England 14 months ago, joined Marsh in the middle.  Maxwell hit Jofra Archer for consecutive sixes in the 44th but chopped the next ball on and was out for 77 off 59 balls.

Following his first fifty in two-and-a-half years, Marsh departed in the 47th, lbw to Mark Wood on 73 off 100 balls, including six boundaries.

England won the toss and had the upper hand for the first half of the innings. Archer knocked over David Warner’s off stump in the fourth over, and Wood’s first ball was edged behind by captain Aaron Finch. Marcus Stoinis batted at No. 3 in place of Steve Smith, who was rested after being hit in the head in the nets on Thursday.

West Indies fast-bowling great Michael Holding has criticised the England and Australian cricket teams for not taking a knee in support of the Black Lives Matter movement during their ongoing limited-overs series.

Players, officials and support staff on both sides performed the gesture of kneeling ahead of all three Tests against West Indies and the ODIs against Ireland. But the gesture was dropped for the matches versus Pakistan and Australia.

“Now that the West Indies team has gone home, that doesn’t mean that you still shouldn’t be respecting the message and what it stands for,” Holding told Sky Sports. “…the ECB came out with a pretty lame statement, as far as I am concerned,” he added.