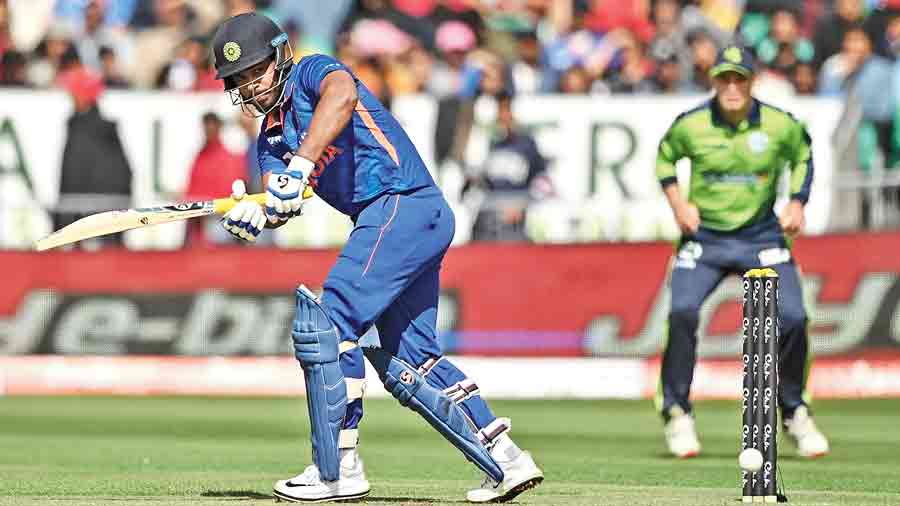 The Irish bowling was below par, serving plenty of freebies on a ground not too big either. But that takes no credit away from Sanju Samson (77 off 42 balls) and centurion Deepak Hooda (104 off 57 balls) as their quality knocks powered India to a mammoth total of 225 for 7 in the second and final T20I at Malahide in Dublin on Tuesday.

But Ireland almost pulled off a stunning victory, falling short by four runs in the end. India thus swept the two-match series. It rained fours and sixes as Samson, opening the innings as a replacement for the injured Ruturaj Gaikwad, and Hooda stitched a humongous 176-run partnership for the second wicket after Ishan Kishan was out cheaply. Their partnership also turned out to be India’s highest ever in T20Is.

In terms of bowling, though, India wouldn’t be too happy as their bowlers were carted to all corners of the ground, particularly by Ireland openers Paul Stirling (40) and captain Andy Balbirnie (60). No doubt, the conditions were excellent for batting, but Ireland maintaining a scoring rate in excess of 10 an over throughout their run chase was audacious.

The other bowlers couldn’t quite pull things back after Bhuvneshwar Kumar had an off day. Leg-spinner Ravi Bishnoi (replacing Yuzvendra Chahal) tried his best, though he bowled a bit without luck. Pacer Umran Malik, however, did well to hold his nerves in the deciding over after he had picked up his maiden international wicket in the form of Lorcan Tucker. Ireland needed 17 off the last over to win, Umran conceded 12.

Even with their inadequate experience of playing against the top teams, Ireland still managed to get 221 for 5. In other words, the proceedings in the second half of the game go on to reflect how significant and crucial the Samson-Hooda partnership was in terms of the game’s outcome.

Samson’s knock was more about elegance, timing and placement. Hooda, on the other hand, was dominant from ball one, launching the opposition bowlers over both sides of the wicket. Hooda was in complete control over everything he did en route to smashing nine boundaries and six maximums, which helped him register his maiden international hundred.