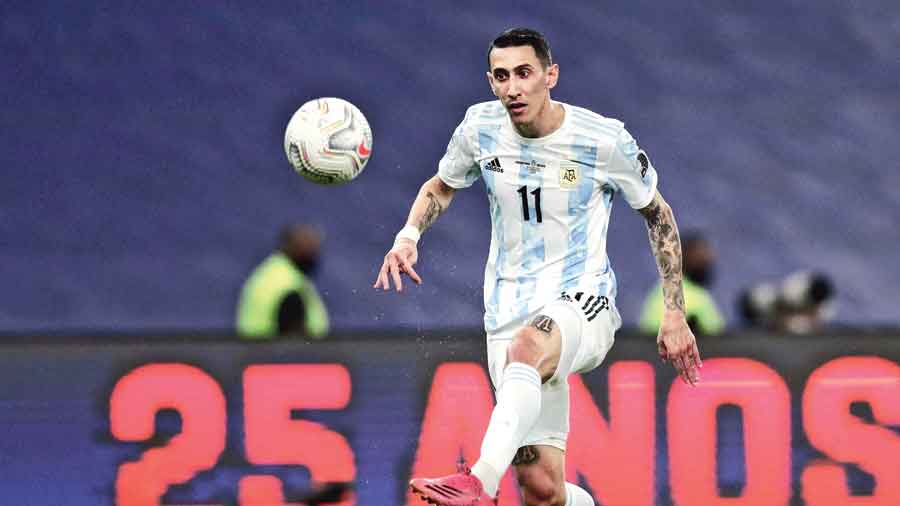 Angel Di Maria scores for Argentina during the Copa America final against Brazil at the Maracana on Saturday.
AP/PTI
Our Bureau   |   Calcutta   |   Published 12.07.21, 04:07 AM

Thirteen years ago, at the Bird’s Nest in Beijing, a then 20-year-old Angel Di Maria was the hero as it was his goal fed by a through ball from Lionel Messi that helped Argentina beat Nigeria 1-0 in the Olympics final.

On Saturday, Di Maria was again the star in La Albicelestes’ 1-0 triumph over hosts Brazil in the Copa America decider.

The 33-year-old Paris Saint-Germain winger scored the lone goal in the 22nd-minute of the final. Argentina’s last Copa title came in 1993, when Di Maria was 5 years old and Messi 6.
Both of Messi’s international medals are courtesy of Di Maria goals.

The PSG forward has revealed that Messi thanked him for the Copa triumph, saying it was Di Maria’s final.

Argentina’s winner came midway through the first half after Rodrigo de Paul made a long pass to Di Maria. The PSG forward counted on poor defending by Brazil left-back Renan Lodi to take control and lob it past goalkeeper Ederson.

Brazil had conceded only two goals in the tournament coming into the final. But Di Maria knew that Atletico Madrid defender Lodi could be beaten. “Before the match I told him (Rodrigo de Paul) that the left-back slept a little in the marking,” Di Maria said after the match. Brazil’s most frequent starter in the position, Alex Sandro, is recovering from injury.

This was also around the time Di Maria was going through an unhappy stint in England with Manchester United.

His injuries and related issues, Di Maria has earlier revealed, prompted him to start seeing a psychiatrist. Argentina fans have since wanted him out of the squad, but he proved them wrong.

“I can’t cry, I can’t fall, we dreamed so much of achieving this. So many people said I shouldn’t come back, I kept banging my head against the wall and today it happened,” Di Maria said after the Copa victory.