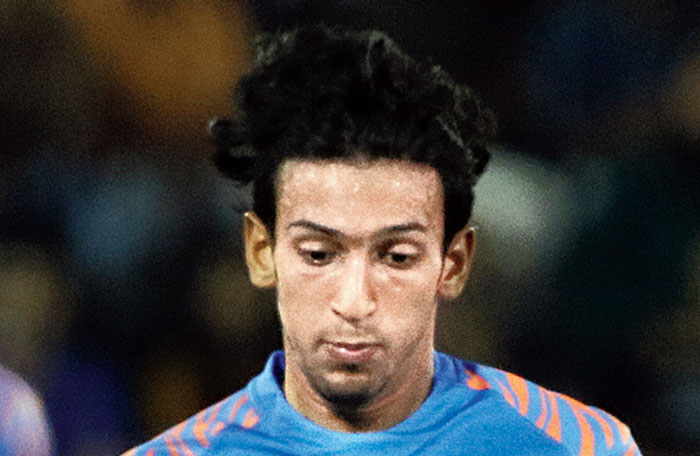 Sahal Abdul Samad was unknown till June this year. But ever since his debut for India national football team in King’s Cup in June, the Kerala Blasters player is making waves.

The 22-year-old had a great match against Qatar in the World Cup qualifier on September 10 which earned words of praise from none other than the India captain Sunil Chhetri.

The midfielder thinks Chhetri’s praise will inspire him to do better in the upcoming matches. “It means a lot to me. Sunil bhai’s words inspire me. He is a motivation for us,” the midfielder told The Telegraph.

Sahal feels the goalless draw against Qatar will work as a confidence booster. “I think getting into the first eleven and playing against the best team of Asia was one of my best achievements till date.

“Snatching a point from Qatar was huge for us. Definitely that match has given us confidence. But that is past. We need to look forward and do well against Bangladesh on Tuesday,” Sahal said.

A fan of Lionel Messi, Sahal said India will not be taking Bangladesh lightly. “We respect our opponents but our aim is to get three points.”

According to Sahal, national team coach Igor Stimac never puts any pressure on the players.

“On the contrary, he wants us to enjoy the game. The coach loves simple game — pass the ball, keep the ball and move around,” the midfielder said.

Sahal wants to improve and he knows his defensive quality remains a problem.

He loves dribbling, moving forward but sometimes takes time to retract to help the defenders. “We all learn through mistakes and I am no different. I need to improve a lot. Not only my defensive quality, I need to improve as a footballer,” the Kannur-born Sahal, who used to play seven-a side football during his formative years, said.

Sahal is someone who eats, drinks and sleeps football. “I watch European leagues and am a regular at PlayStation. I also love listening to music.”