Captain Virat Kohli ‘a fan of the youngsters’

Suryakumar Yadav, who replaced Ishan Kishan, struck six fours and three sixes in his 31-ball 57 to top score for India 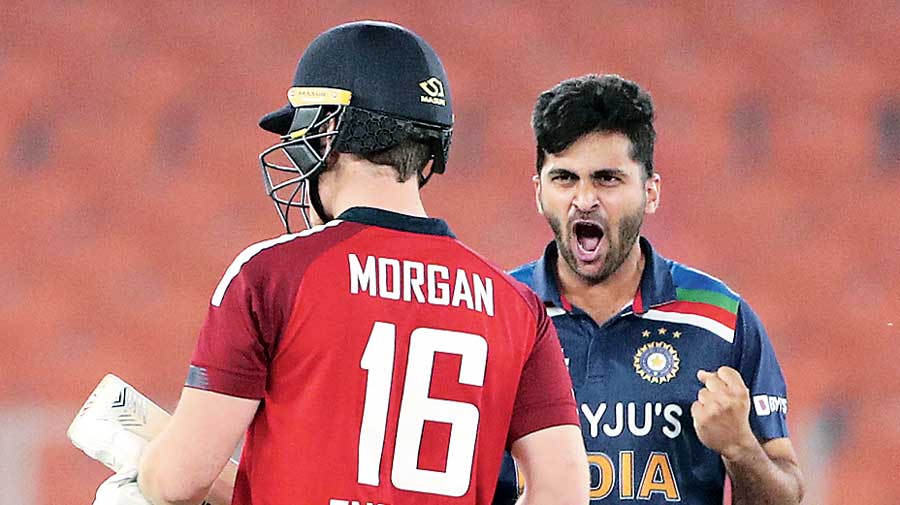 Suryakumar Yadav stole the limelight on Thursday and captain Virat Kohli couldn’t hide his surprise at such a stunning knock.

Surya, who replaced Ishan Kishan, struck six fours and three sixes in his 31-ball 57 to top score for India. He made his debut in the second T20I but did not bat in that match.

“It’s not easy to walk in at No.3 and start like that in your first chance to bat...We all were stunned. He stamped his authority and allowed the likes of Shreyas, Hardik and Pant to do their job. I am a fan of these youngsters,” Kohli said after the match.

“I am more happy for Hardik who bowled his four overs. It augurs well for us if he does it regularly. He was potent with the new ball. He has skill with the ball and he clicked 140-plus as well. He put enough pressure on Jason Roy and then got Sam Curran out as well in the end. His role in the end was very crucial.”

The team performance did leave Kohli satisfied. “The wicket was better than any other game and the dew factor was massive... The wicket allowed us to get to that total. There were a few instances in the middle which were strange, but having said that, 180-plus was what we were looking at.

“Special mention must be made of Surya... he batted outstandingly well in his first game. Similar to what Ishan did the other day. They are quite fearless, having played in the IPL. We don’t have any T20Is after this so I want the guys to be confident and come out of it very strongly,” Kohli remarked.

“With the ball we were quite clinical. Shardul turned it around but our Powerplay start kept England in check and under pressure.”

Surya though was unlucky to have been given out in the 14th over after repeated replays of Dawid Malan’s catch off Sam Curran by the TV umpire.

The Indian captain couldn’t hide his disappointment. “There was an instance during the Test series when I was next to Jinks (Ajinkya Rahane) and he clearly caught the ball but wasn’t sure... If it is a half and half effort and the fielder is in doubt, there is no way the umpire from square leg can see it clearly. The soft signal becomes that important and it becomes tricky.

“I don’t know why there can’t be an ‘I don’t know’ call with the umpires as well. It is similar to umpire’s call as well.”

Kohli was out of the field for considerable time during the England innings but said there was nothing to worry on his fitness.

Man of the Match Surya was a satisfied man.

“Really happy with the way things went, I’m just trying to be myself, talk to myself, keep things simple and it becomes easy inside,” Surya said at the presentation.