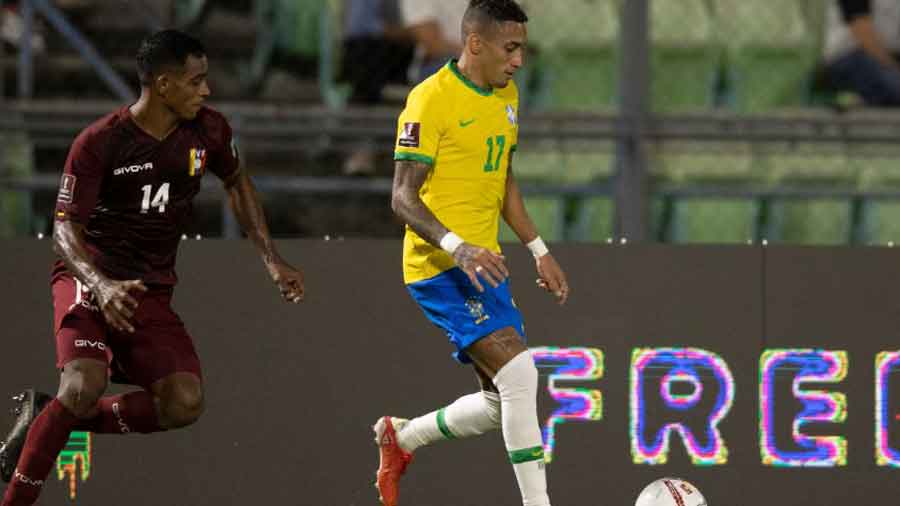 Leeds United forward Raphinha had to wait a long time for his Brazil debut but it was worth it as he came off the bench to play a decisive part in his side’s 3-1 come-from-behind victory against Venezuela.

The 24-year-old right winger was called up for the national team for the first time in September but was forced to withdraw after Premier League teams refused to release players from England’s red list of Covid-19 high-risk countries.

But when his chance came he seized it with both hands, to the delight of fans who had watched their team struggle against the only South American side never to reach the World Cup finals.

“I was really anxious to make my debut and after I wasn’t allowed to come the first time I got even more anxious to be here and wear a Brazil shirt,” Raphinha said after the game. “So I think that I gave my best and it was good for me individually and to help my team mates on the pitch.

“Tite asked me to do what I did with Leeds and I don’t think I let him, teammates or the Brazil fans down,” he said, referring to the Brazil coach.

Raphinha joined Leeds in October 2020 after short spells at Stade Rennais and Sporting Lisbon and has been a key player in Marcelo Bielsa’s transformation of the Yorkshire club.

He was also transformational in Brazil’s second half performance in Caracas.

After going behind and looking like they might lose to Venezuela for the first time in 18 World Cup qualifiers, Brazil improved massively in the second period, with substitutes Raphinha, Vinicius Jr and Antony helping turn things around.

Raphinha was involved in all three goals, taking the corner from the left that led to Marquinhos’s equaliser, getting into the box when Gabriel Barbosa was felled for a penalty, and then crossing from the left for Ajax’s Antony to round off the scoring in stoppage time.

Brazil now face qualifiers against Colombia and Uruguay and with Neymar almost certain to return after suspension, forward places are at a premium.

However, Raphinha was content to have given his coach the best kind of selection dilemma.

“I think it is a good doubt for him,” he said. “It’s up to him decide now whether I play or not.”

Argentina failed to score for the first time since June 2019 but a 0-0 draw at Paraguay maintained their unbeaten record in the qualifiers.

Argentina have gone 23 games without defeat under coach Lionel Scaloni and are second in the qualifying group with 19 points, behind Brazil.

Argentina were without Lautaro Martinez in attack and with Lionel Messi quieter than usual the game lacked excitement, especially in the first half.

The visitors had the better of the opening exchanges but Paraguay grew into the game in the second half and tested Emiliano Martinez in the Argentine goal more often.

Scaloni made five changes in the second half and the game opened up.

Substitute Alejandro Gomez brought out a superb save from Paraguayan keeper Antony Silva with 12 minutes remaining and then at the other end Carlos Gonzalez blazed a cutback over the bar three minutes from time.

“I think we had some good moments,” said Argentine defender Nicolas Tagliafico. “We maybe struggled to control the game. There were times when Paraguay came at us and were dangerous.”