A hat-trick, maiden national team call-up and he showed presence of mind to make a run and latch onto Bartholomew’s pass to score the winner for Mumbai City FC 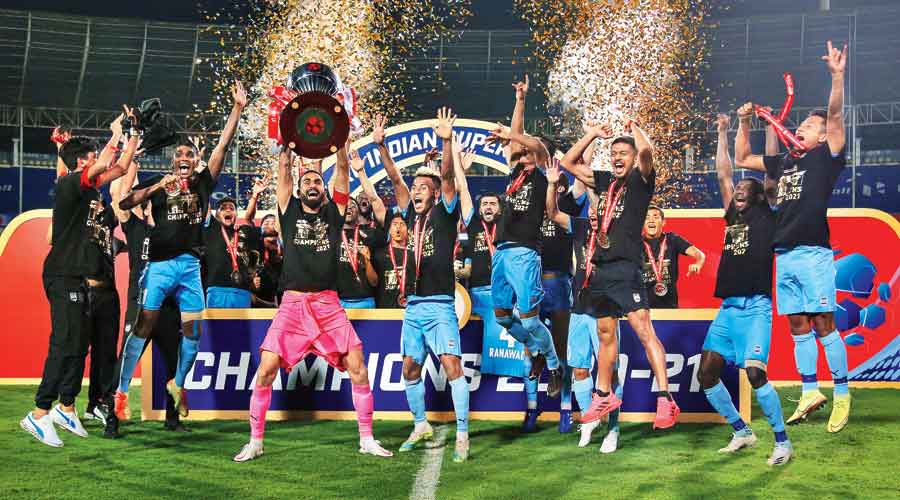 Mumbai City FC players and support staff celebrate with the trophy after winning the ISL VII title at the Nehru Stadium in Fatorda on Saturday.
Picture courtesy ISL
Arindam Bandyopadhyay   |   Calcutta   |   Published 14.03.21, 01:58 AM

Bipin Singh will not forget ISL VII for a long time. A hat-trick, maiden national team call-up and, on Saturday in the final, he showed presence of mind to make a run and latch onto Bartholomew Ogbeche’s pass to score the winner for Mumbai City FC.

An ecstatic Bipin ran towards the sideline, coach Sergio Lobera and Mumbai City bench went into a delirium. ATK Mohun Bagan just could not believe that they conceded a goal in the 90th minute.

Just when it seemed that the final, being played at Nehru Stadium in Fatorda, is heading towards extra-time, Bipin made the difference. The 2-1 score meant that Mumbai City did an ISL double, the league winners shield on February 28 and now the title.

Bagan goalkeeper Arindam Bhattacharya could have dealt with the long ball in a much better way. He rushed out, even as Tiri and Sandesh Jhingan had Ogbeche covered, and made a mess of things. As the wily Ogbeche, after leaving Tiri and a retracting Pritam Kotal for the dead, waited for one of his teammates, Bipin stepped up.

The Nigerian played it to the 25-year-old whose low and powerful left-footer went past Jhingan and Arindam like a bullet into the far corner.

“The level of Indian players is the key to win trophies. They learn a lot everyday and prove themselves on the field. It’s not about Bipin only because he scored the winner,” Lobera said after the match.

“This is the result of all the hard work we put in in the last five months. It was a difficult situation at half-time after Amey (Ranawade) suffered a head injury and was rushed to a hospital. I told my players to focus on the game. I told them Amey is a strong player and would want us to win this for him,” Lobera added.

David Williams, who put Bagan ahead in the first half was crestfallen. “It’s so disappointing. It’s hard to take and I don’t know what to say,” was all he could offer.

The first half saw one goal each for Bagan and Mumbai City. Mumbai City FC’s sloppy defence gave Bagan the chance to go one-up. Roy Krishna chased a loose ball and gave it to Williams whose powerful right footer gave rival goalkeeper Amrinder Singh hardly a chance to move.

Mumbai City FC didn’t have to wait much for the equaliser. Eleven minutes later, Tiri scored an own goal. Ahmed Jahouh sent a long ball, Tiri tried to head the ball out but instead it went in past a helplessArindam.

This was the Spaniard’s second own goal, having scored against SC East Bengal.

Earlier, Football Sports Development Limited chairperson Nita Ambani expressed her delight on delivering an “uninterrupted” and “successful” ISL despite the threat posed by the pandemic.