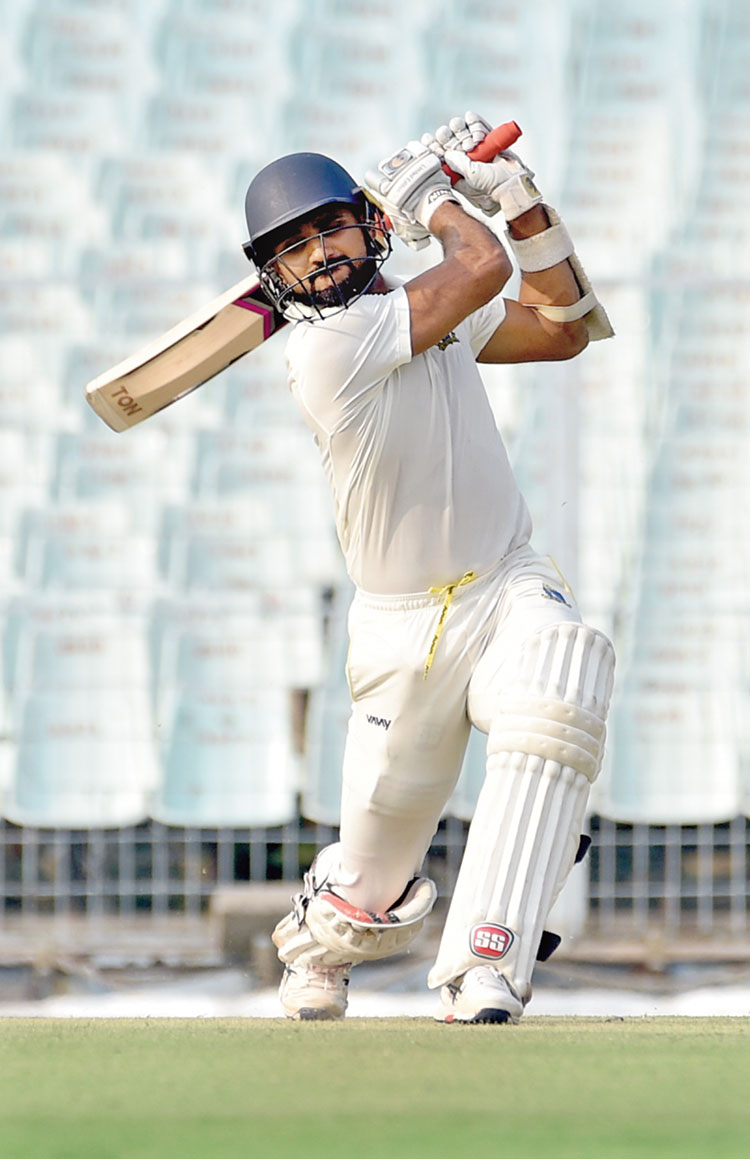 Bengal were reeling at 67 for six soon after lunch with Karnataka looking set to finish Day I with one foot in the final.

But Anustup Majumdar, batting as well as he has ever done, shone again in a crisis scoring yet another century with support from Shahbaz Ahmed and Akash Deep to give Bengal some hope.

On a greenish pitch where batting became easier after the opening session, Bengal ended the opening day of this Ranji Trophy semi-final at 275 for the loss of nine wickets.

More importantly for Bengal, Anustup (120 batting) is still at the crease and if No. 11 batsman Ishan Porel can hang around a little longer, the team total could well reach 300 or at least get closer to it, something that should be encouraging for the bowlers.

Anustup not just scored his second century in back-to-back games, but also helped Bengal regain a bit of momentum.

He has brought back some positivity in the camp, where the scene was gloomy given the batsmen’s failures after Karnataka won the toss and opted to bowl.

More than the 18 boundaries and a six that adorn his unbeaten knock, it’s the assuredness, calm and the positive intent that Anustup showed right from the very first runs he scored — which came off an authoritative on-drive for four off Krishnappa Gowtham — that stood out.

Openers Abhishek Raman — first-ever DRS victim in the competition — and captain Abhimanyu Easwaran were back in the hut playing poor shots, before a hint of inward movement found the inner edge of No. 4 batsman Arnab Nandi’s bat, giving Abhimanyu Mithun his second scalp. Bengal were then 43/3, scoring at snail’s pace even though the Karnataka bowlers were far from outstanding on a helpful track.

Sudip Chatterjee, who came into the XI after regular opener Koushik Ghosh was ruled out after hurting his shoulder before the start of proceedings, did hold one end up. But he never looked confident.

Manoj Tiwary started well, but he too perished, trying to counter attack. Anustup walked in at such a difficult situation, which only worsened with the dismissal of Sudip on the stroke of lunch and Sreevats Goswami in the third ball of the second session.

Pacer Ronit More trapped both left-handers leg before by bringing the ball back in.

Thereafter, just as they had done versus Odisha in the quarters, Anustup and Shahbaz began their repair work.

A steady Shahbaz eased matters to a fair extent for Anustup and the duo put on 72 for the seventh wicket, till Mithun cleaned up the former with a beauty.