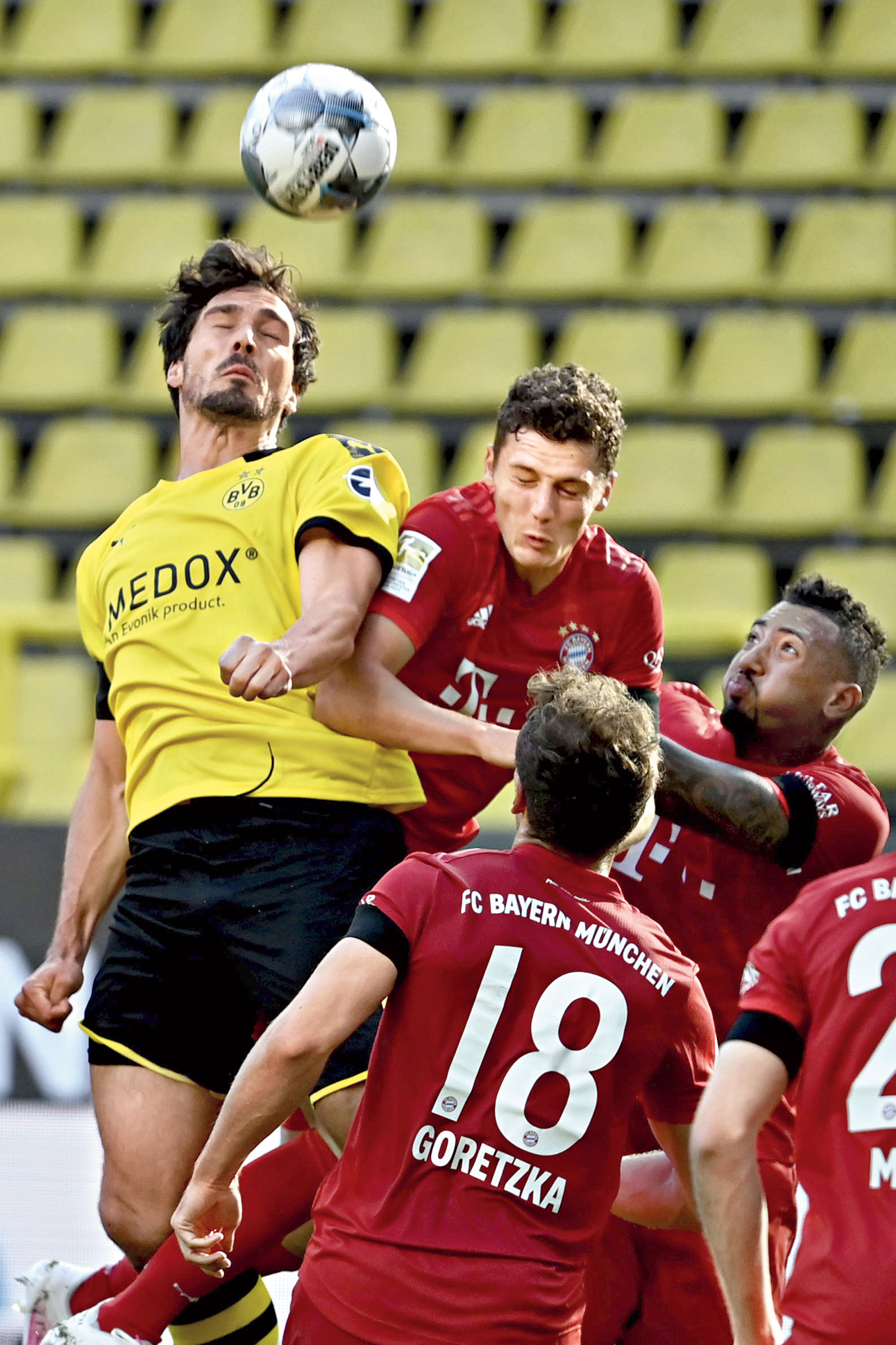 Kimmich's goal gave Bayern a 1-0 win over closest rival Borussia Dortmund on Tuesday, moving his team a huge step closer to winning the league for a record-extending eighth consecutive time.

Kimmich collected the ball outside the area and chipped it over Dortmund goalkeeper Roman Bürki minutes before the break. It was enough for Bayern to stretch its lead to seven points over Dortmund with six games of the season remaining. Dortmund had a chance to cut the lead to one point with a win, but Bayern has only dropped points once in the last 14 games.

It was an eerily quiet meeting between the Bundesliga rivals as the shouts from players and coaches, and the thud of the ball being kicked around, could be heard clearly in Dortmund’s almost-empty 80,000-capacity Westfalenstadion.

The Bundesliga, which resumed after a two-month coronavirus-induced suspension on May 16, is being played without fans and amid strict hygiene measures for the rest of season.

Some TV broadcasters used artificial crowd noise during the game but there were no such sounds being played in the stadium.

Dortmund was without injured captain Marco Reus, while Jadon Sancho was a substitute as he is still regaining full fitness.

The home side was aggrieved not to get a penalty before the hour-mark when 19-year-old Erling Haaland’s shot was deflected just wide by the falling Jerome Boateng’s right elbow. Boateng had his back to ball and the contact seemed accidental.

Boateng had cleared off the line in the game’s first real chance after Haaland beat veteran goalkeeper Manuel Neuer, who was playing his 400th Bundesliga game.

The visitors gradually worked their way into the game and Dortmund needed a goal-line clearance from Lukasz Piszczek after Serge Gnabry had beaten Bürki, who made a good save to deny Kingsley Coman.

The goal came when Kimmich spotted Burki off his line and had the skill and composure to lob the ’keeper from about 20 meters (yards) in the 43rd.

Dortmund reacted by bringing on Sancho and Emre Can for Brandt and Thomas Delaney at the break. But the changes had little effect as Bayern stayed in control.

Haaland limped off in the 72nd as 17-year-old American Gio Reyna came on for his 10th league appearance for Dortmund.

Another North American teenager, Bayern's Canadian 19-year-old Alphonso Davies, caused plenty of problems for Dortmund with his pacey runs down the flank but was booked for bringing down Reyna outside the penalty area when TV replays showed he got the ball.

Still searching for an equalizer, Favre brought on Mario Götze for the last 10 minutes. Sporting director Michael Zorc confirmed Saturday that the World Cup winner will be leaving the club at the end of the season.

Bayer Leverkusen missed the chance to move third by slumping to a 4-1 home loss against Wolfsburg, allowing Borussia Mönchengladbach to move ahead into fourth place with a goalless draw at Werder Bremen.

Leverkusen had defeated Gladbach at the weekend to move fourth – the last place for Champions League qualification – but dropped to fifth on goal difference.

American defender Timmy Chandler scored late, a minute after coming on as a substitute, to rescue a 3-3 draw for Eintracht Frankfurt at home against Freiburg. The visitors had been 3-1 up with just over 20 minutes to go.