‘A good leader never has ego’ 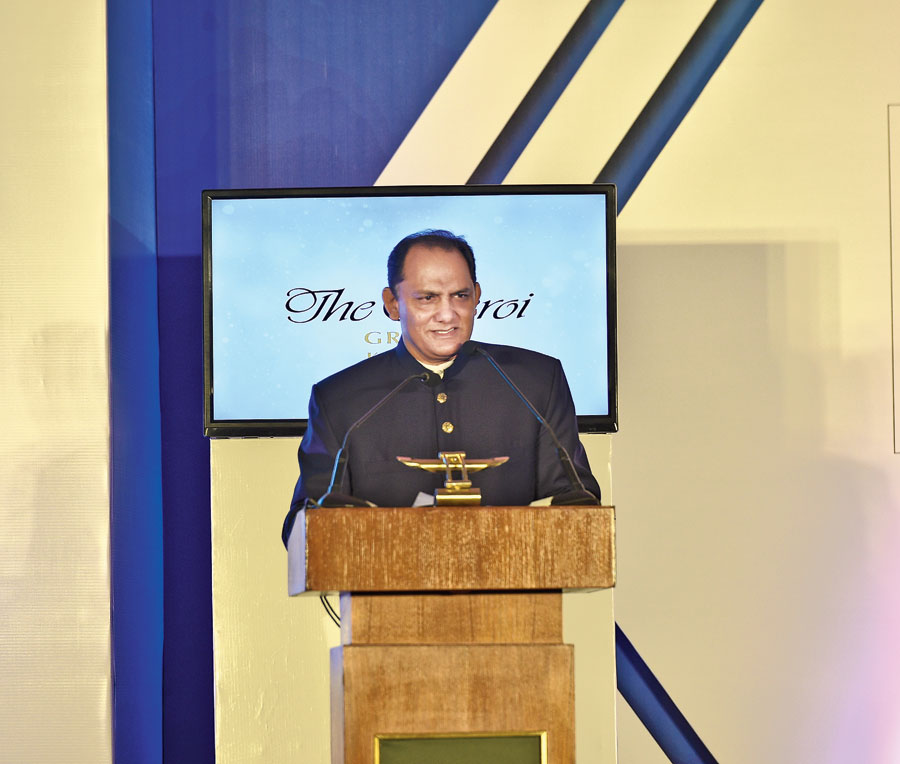 Mohammed Azharuddin’s speech at the Air India presents Tiger Pataudi Memorial Lecture, a joint initiative by The Bengal Club and The Telegraph in association with The Oberoi Grand Kolkata, could easily have passed off as one his signature knocks, casual yet captivating. And like playing shots all around the ground, Azhar spoke on a variety of topics.

What can I say about Sir… An outstanding personality, too much grace and too much style! He became the captain even before I was born. Without him we wouldn’t have been where we are now in world cricket. His 2793 Test runs in today’s time would have been worth more than 6000 runs… Because of the way they played on uncovered wickets. And his six centuries today would be more than 16. Once Ian Chappell told me about Sir, ‘With one eye he was such an outstanding cricketer, imagine what he could have done with two eyes!’

I met him quite a few times when we went to play in Sharjah. He used to come down from his hotel room very rarely. When you go to the jungle, it is very difficult to spot the tiger. He was just like that… A bit shy, very reserved. Like Bishan Singh Bedi said, he didn’t have his own kit, didn’t have his own cricket gear… But then he didn’t need to have any. He was the Nawab, he could pick up anybody’s kit! I’m very happy to have played for Hyderabad, for whom the Nawab of Pataudi played.

Whether you were standing next to him or some distance away, you couldn’t take your eyes off him. He had that aura… I learnt a lot from him. He told me, ‘Azhar, you are a batsman, your job is to score runs, don’t always complain about the wicket or the conditions. Same for the bowler, his job is to take wickets.’ Sir was a person from whom you could learn a lot, and not just about cricket. He used to talk very rarely, but whenever he used to talk, he used to talk sense. I was disappointed that I couldn’t attend his funeral, but that was because Sir passed away five days after my younger son and my sister’s son passed away in an accident.

A lot of people ask me to talk about captaincy. Pataudi Sir was the one who taught us how to lead a side.

Being a captain, I realised that first of all you have to win the trust of the players. Then you have to understand every player, because every player is different. I remember when I was the captain, a lot of people used to put pressure on me from outside. Like some of them used to say, ‘Why Kapil paaji is not bowling in the nets?’ But I don’t need to go and tell a player of Kapil paaji’s stature and repute to bowl in the nets. I always let him do what he wanted to do. Not many people know that Kapil paaji had a lot of interest in bowling off-spin in the nets. But in a match, when you gave him the ball, he knew what to do with it.

For some big players, sometimes, as a captain, you will have to just let them be. If you want to be a great leader or a good captain, you should not impose yourself on the players. Leadership is very simple, you have to just remember that a good leader never has an ego.

My relationship with Eden Gardens started when I was 14 years old. I was playing a South Zone versus East Zone match and I got a fifty… After that, whenever I came to Eden Gardens, it always felt a bit different. If you see some of my innings at the Eden, I think at times there was some divine intervention.

In 1996 during the tour of England, we produced two very good players who went on to play for India for a very long time. Sourav Ganguly and Rahul Dravid. I don’t call him Sourav, I call him Dada…

And when Dada started playing well, my popularity at Eden Gardens reduced. But I’m very happy for him. He was an outstanding captain and he showed us how to win outside India. And Rahul, as people call him, was ‘The Wall’ for Indian cricket for a long time.

In Hyderabad cricket, a day used to pass just like that… Even if you were losing. The players and their mood was always jovial. Once, during a match with Bombay… Bombay were batting on 730 for three or something like that. Rajesh Yadav was fielding at deep square leg and Arshad Ayub bhai was bowling. Rajesh misfielded a few times and the ball went to the boundary. Arshad bhai told him, ‘kya kar rahe ho tum yaar?’ To which Rajesh replied, ‘Aap ne dekha score kitna hua hai… Toh chaar-aat run jaate hain to mera-apka kya jaata hain?’

I’m not in favour of cricket academies… Taking 300 boys and not producing a single good player, it’s useless. Also, when you don’t have the skill, what’s the point in working hard and showing dedication. You first need to have the skill. Not many know that I was into athletics and football in my growing up years. But in football, I saw I was only doing the running, I didn’t have the skill. In athletics, I was good at running… My fastest time over 100m was 11.50 seconds. May be that is why I didn’t have cramps ever in my career. I would like to tell all those people who run academies that money is important, but if you can’t produce good players, it means nothing.

You can’t fiddle with Test cricket… If you fiddle with Test cricket, you are fiddling with the game itself. If Test cricket dies, the game of cricket would not exist. Test cricket is a test of patience, test of endurance, test of skill. It’s a test for the fielder as well. That’s how I improved my fielding as well. Fielding nowadays has become easy, because the grounds are good. But I strongly believe that all the three formats can co-exist. The IPL has produced so many good players… Like Jasprit Bumrah. But you can’t take your talent for granted.

We need to learn to play swing bowling… It needs completely different technique. You can’t play like you play in T20 or 50-over cricket. Swing bowling is an art, but playing swing bowling is also an art. I’m sure the Indian team will come back with a lot of learning. At the end of the day, the game of cricket is greater than the ones who are playing it. People will come and go, but the game will stay.