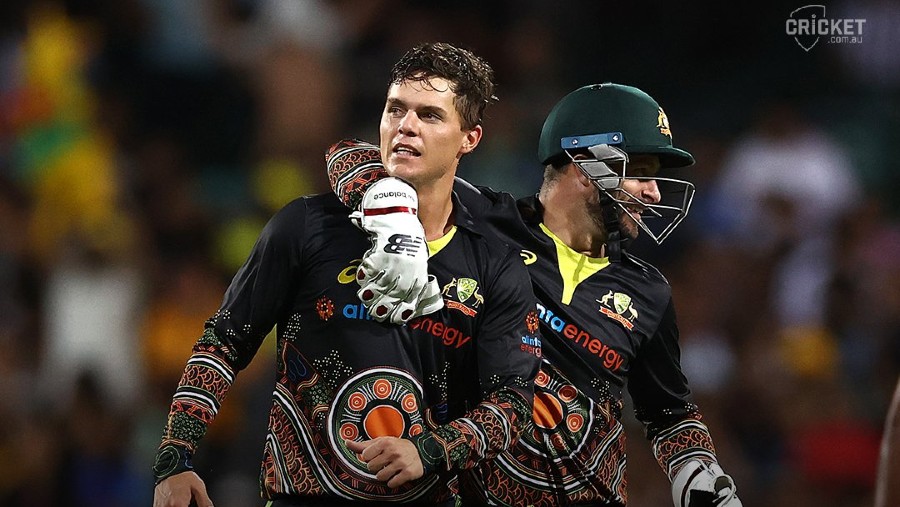 MoM Mitchell Swepson (left) celebrates with Matthew Wade after taking the wicket of Sanju Samson on Tuesday
Twitter/@cricketcomau
Our Bureau And Agencies   |   Calcutta/Sydney   |   Published 09.12.20, 01:19 AM

Spinners Mitchell Swepson and Adam Zampa helped Australia derail India’s chase of 187 and prevent a clean sweep in the three-match T20I series at the Sydney Cricket Ground on Tuesday.

Swepson’s variations fetched him three crucial wickets out of India’s top five. Senior leg-spinner Zampa’s control effectively killed the chase in the 18th over by drawing a top edge from Hardik Pandya.

The Australian bowlers also held their nerves to come up trumps against the class of Virat Kohli as India fell short by 12 runs in the third and final T20I.

While India won the shortest format 2-1, it was overall an even result for the two teams who won three white-ball games each. Tuesday’s loss ended the visitors’ 10-match winning streak in the format.

Kohli got as many as four reprieves and cashed in well enough to smash his way to 85 off 61 balls but India could only reach as far as 174 for 7 in their 20 overs.

The Team India captain’s slash drive off Andrew Tye in the penultimate over was plucked inches off the ground by Daniel Sams, who compensated for a forgettable day with the ball.

Once Pandya was gone, there was too much pressure on Kohli and this was one rare occasion when he failed to take the team home.

While he hit four fours and three sixes, Kohli did lead a charmed life as Steve Smith missed a dolly at deep mid-wicket fence when he gave Maxwell the charge. Then Sean Abbott failed to get his hands on a tough return catch while another slipped through Tye’s palms. During the fag end, Matthew Wade missed an easy stumping.

Swepson, who bowled far too short in the first game, was happy to get some “turn and shape” during his match-winning spell of three for 23 as it worked well against a rampaging Kohli.

“I just tried to really spin it up and get some nice shape and turn. That seemed to work a lot better for me and it worked quite well to Virat,” Swepson, named Man of the Match, said at the post-match media conference.

He called Zampa, a bit of a mentor, as he has been there and done that at this level. “Zampa has been excellent since I have come into the T20 squad. He is obviously a very experienced bowler now in white-ball cricket, played close to 100 games for Australia now.

“So being able to draw from a guy that’s been out there and done it, and particularly over the last couple of years, he has done it so well.”

Zampa has given him a lot of advice after he came into the squad, something that has helped Swepson immensely. “It was great to have him here as a bit of a mentor, especially having a guy like him out on the field, helping with setting fields and things like that were really handy for me.

“He was really quick to offer his advice when I flew into the squad, so I can’t speak highly enough of Zampa’s help that he gave me throughout the past three games,” remarked Swepson.

He is part of the Australia A squad that will take on India in a three-day warm-up game, beginning on Friday at the SCG, and he is looking forward to the opportunity.

“I am hoping that I can play a role and hopefully take some wickets at the SCG, which is a lovely place to play and every time I play here, I enjoy it, so can’t wait.”