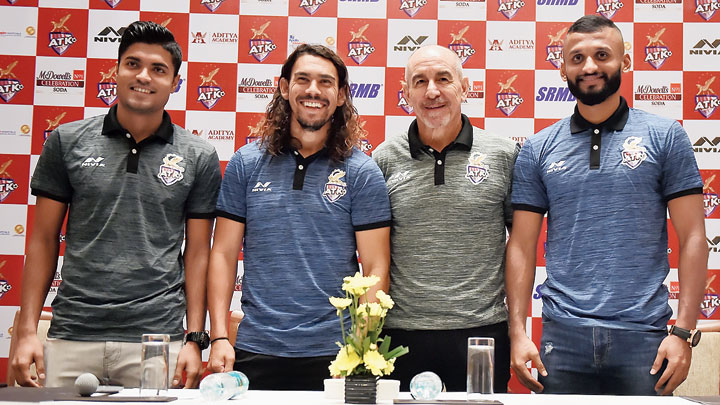 ATK and India national team footballers Pritam Kotal and Pronay Halder on Thursday hailed team co-owner Sourav Ganguly, who is set to become the Board of Control for Cricket in India (BCCI) president on October 23, saying the development has inspired them to win the third title.

Sourav is also the face of the Indian Super League (ISL) which is set to kick-off on October 20 when two-time champions ATK take on Kerala Blasters in Kochi.

Former India captain Sourav will attend the opening ceremony for which he would not be able to go for the third Test between India and South Africa in Ranchi from Saturday. “He is an inspiration to all of us. There is a Bengali sentiment also. I have grown up watching him play. I fondly remember his debut century at Lord’s (in 1996) and that really motivated me as I aspired to become a footballer,” India full back Kotal said on the sidelines of ATK Media Day here.

“I am eager to meet him and congratulate him. It’s a great achievement and as a Bengali I feel proud. This will definitely inspire us to go for the title,” defensive midfielder Pronay Halder said.

ATK assistant coach Sanjoy Sen added during the press conference that it is a proud moment for the team. “It’s a very nice development. We are all very proud. It may inspire us to go all the way.”

ATK won the inaugural ISL title in 2014 under Spanish coach Antonio Lopez Habas who is back for a second term with the city-based outfit.

Former Spanish international goalkeeper Jose Molina took charge in the third season and the Calcutta franchise put up a dominant display to win their second title — a record they jointly hold with Chennaiyin FC in the five-year-old history of the league.

“Our target is to win every game. I cannot think about the title now as we have to perform in every match we play. We have a good team and everyone is fit. We are raring to go,” Habas said.

Kotal, who was part of India’s squad in their Fifa World Cup qualifier against Bangladesh here on October 15 which they drew 1-1, said the ISL will be a platform to perform and keep his place in the national team which has a lot of competition now under coach Igor Stimac.

“I am looking forward to the League. The ISL is an opportunity for me to do well and keep impressing the coach. We have Afghanistan (November 14) coming up.” Pronay, who has been sidelined with a hamstring injury for some time, said he is now fit and wants to use the ISL to comeback to national reckoning.

“I have recovered well. I want to do well this season and do the best I can to keep myself ready for the national team.”

David Williams, who along with Roy Krishna is expected to score goals for ATK, said that franchise is in good shape.

“We are in a good shape. We are here to entertain. With ATK you will get goals. The ambience at the Salt Lake Stadium last Tuesday (during the India vs Bangladesh match) was magnificent. We have some wonderful foreign and domestic players. We are ready and everyone feels fresh and fit.”