Advertisement
Home / Science-tech / Why do humans eat so much meat?

Why do humans eat so much meat? 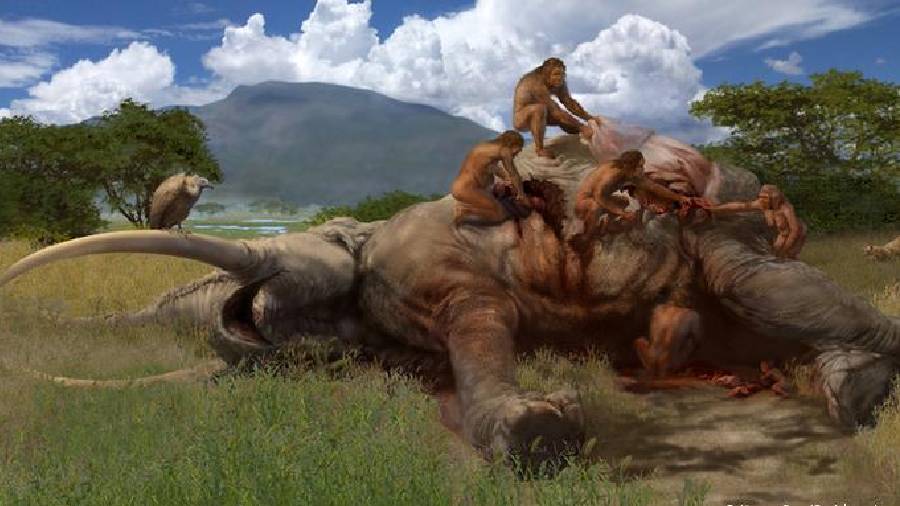 Archaelogical evidence of butchering animals may not indicate that meat was key to human evolution after all
Deutsche Welle
Deutsche Welle   |   Published 10.05.22, 03:25 PM

Humans have been eating meat since the prehistoric age, consuming ever more of it as time has worn on. Over the past 50 years alone, we have quadrupled global production to roughly 350 million tons annually, according to the United Nations Food and Agricultural Organization (FAO).

And the trend shows no sign of abating. Current predictions suggest we will be producing up to 455 million tons a year by 2050.

Scientists have long raised concerns about the environmental impact of this love affair, particularly with regard to industrially farmed animals, and have deemed it an "inefficient" food source, on the basis that it requires more energy, water and land to produce than other things we eat.

A study on the impact of farming for instance found beef production is responsible for six times more greenhouse gas emissions and requires 36 times more land compared to the production of plant protein, such as peas.

Avoiding meat and dairy products is the biggest way to reduce our environmental impact on the planet, the study concludes. Without meat and dairy consumption, global farmland use could be reduced by more than 75%.

The psychology behind eating meat

Yet, many of us continue to eat meat regardless. Benjamin Buttlar, a social psychologist from the University of Trier, Germany, attributes this to habit, culture and perceived needs.

"I think a lot of people just enjoy the taste. And the other thing is the identity part of eating. Many traditional cuisines revolve around certain meat dishes," he said, adding that the habitual nature of eating animals means we often don't even question what we are doing.

"And most of the time, these habits prevent us from thinking that meat consumption is actually bad because it's just something that we do all the time," he said.

Then there's the fact that because what we are eating doesn't remind us of an animal or the suffering it has gone through on the way to the plate, we are able to dissociate more easily. Yet when confronted with a different perspective, whether in talking to a vegetarian or a vegan or watching a documentary about animal welfare, Buttlar says we might feel a need to justify ourselves, for example, by saying humans have always eaten meat.

Research shows that justifying eating meat as a natural, normal and necessary part of our diet is something that's more typical for males.

"You see this in the trends of food," Buttlar explained. "There are a lot more young females and fewer men who are becoming vegetarian because it's still a masculine stereotype that men eat meat. And this goes back to the idea of strong men hunting and evolutionary misconceptions around meat consumption."

The 'meat made us human' hypothesis

Scientists long believed that eating meat helped our ancestors develop more human-like body shapes and that eating meat and bone marrow gave the Homo erectus the energy it needed to form and feed a larger brain around 2 million years ago.

But a recent study questioned the importance of meat consumption in our evolution.

The study authors argued that while the archaeological evidence for meat consumption increases in step with the appearance of H. erectus, this could also be explained by the greater attention given to the time period. Or, put another way, a sampling bias.

The more paleontologists went looking for archaeological evidence of butchered bones, the more they found it. As a result, the increase in bones seen during this time is not necessarily evidence of an explosion in meat eating, the authors wrote.

"I was definitely very surprised by this finding," said Briana Pobiner, a paleoanthropologist at the Smithsonian Museum of Natural History in the US and study co-author. "I was one of those people for a long time that had this narrative that H. erectus evolved because meat eating increased, and so these findings are something that forced me to reexamine my perception of our evolutionary history."

What role did plant-based food play in our evolution?

Eating meat may not have been responsible for supersizing our brains either, according to Pobiner, who researches the evolution of human diet.

"We don't see a big increase in brain size around the time that meat eating started. The brain size got absolutely bigger with H. erectus, but it actually didn't get relatively bigger — so a much bigger brain compared to the body size — until about a million years ago."

There is some evidence that early humans started cooking their food around the time their brains were getting bigger. Heating food unlocks extra nutrients and speeds up the process of digestion because food is softer and easier to chew.

"And interestingly, there are ideas that it's not so much one particular type of food that drove our evolutionary history, but it's really being able to eat a wide variety of foods that made us so successful and that kind of made us human," Pobiner said.

Currently, 75% of the world's food comes from only 12 plants and five animal species. But when humans consume too much of a single food source, it can cause health problems.

"Innumerable studies show that when human beings consume animal protein, it is linked to the development of a variety of cancers," Dr. Milton Mills, an internal medicine and critical care physician in the US, told DW.

Some people argue that vegetarians or vegans typically do not get enough protein and nutrients from their diets, but Mills, who is an advocate for plant-based diets and founded his own website to raise awareness of the issue, disagrees.

"Those theories originated 50, 60 years ago, when people were under the mistaken impression that meat was somehow more nutritious than plant foods. That was a grotesquely false misconception that people used to have, that there are only certain amino acids that you could get from animal tissue. That is flatly not true," said Mills.

If the appetite for meat remains unchanged, the world population could be too big to feed itself by 2050, when we'll reach a global population of almost 10 billion.

But how can levels of global meat consumption be reduced? Psychologist Buttlar believes incremental change with "top-down intervention" is the way forward.

"For instance, by making meat products as expensive as they should be for securing animal welfare and in terms of costs for the climate. And by making alternatives cheaper," he said.

What's also important, according to Buttlar, is enabling people to have positive associations with plant-based alternatives.

"Instead of pushing them away by saying, 'you shouldn't eat meat,' we should probably say, 'have you tried this? This is really good.' And once they realize plant-based food tastes the same or even better, and it's even better for my health, for the climate, and animal welfare, then change will come automatically."

Changing attitudes are already becoming apparent, even in meat-loving Germany. According to the statistics for 2021, the market for meat alternatives is thriving with a 17% increase in the production of plant-based foods compared to 2020.