Realme pushes its limits with the GT 5G

Frankly, there is only nitpicking that can be done with this phone because it’s blazing fast and has a design to match 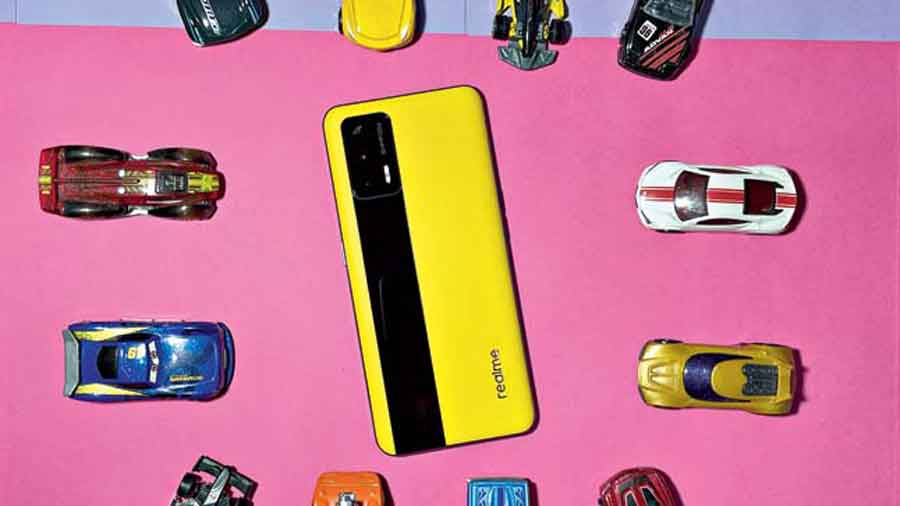 The smartphone company that is making competition squirm in their seats is Realme. In no time it has switched gears from new-kid-on-the-block mode to Max Verstappen-fast, hoping to catch up with Lewis Hamilton. So far the company has been making the right noises on the hardware front and now there is enough chutzpah in way of software, making the latest — Realme GT 5G — an enviable proposition. Frankly, there is only nitpicking that can be done with this phone because it’s blazing fast and has a design to match.

Unlike anything in the market, Realme has gone with vegan leather as an option on the rear panel, which has the feel of a car race track. The vegan leather appears to be of good quality and a seven-day test run is not enough to gauge the long-term durability factor.

But one thing we are sure of is speed, since the phone comes with Snapdragon 888 5G processor, which is among the fastest you can get in the market. It’s no point throwing benchmark scores at you because it’s a fast processor and there were zero lags while we tested it. If the phone could speak, it would have fired words at the speed of an auctioneer. During gaming, the thermals remain steady and the performance is sustained. Even after 75-80 minutes of Asphalt 9: Legends, there were no stutters.

Matching the processor is the 6.43-inch full-HD+ super AMOLED display with a 120Hz refresh rate and a maximum 360Hz touch sampling rate, ensuring both scrolling and gaming are top of the line. There’s good colour accuracy while images appear contrast-y and sharp. If you want, you can tone down the colour richness and switch on video colour enhancer. Equally impressive is the level of customisation on every aspect of the phone.

The camera has zero lags
The Telegraph
Impressive snappers

Going by past records, there were some inhibitions about the camera but Realme has come out on top. What you get is a 64MP main camera with an 8MP ultra-wide shooter and a 2MP macro lens. The main camera mostly dazzles and there are enough details in every shot. Night photography too is quite good with most of the noise being taken care of. The colour rendition on the ultra-wide appears slightly different but the images are usable. The night mode works on both the main and ultra-wide cameras. Where the camera falters is on the macro front because there is no auto-focus and selfies appear slightly bright. You can shoot 4K videos at 30fps while ultra-wide videos are at 1080p (30fps), with the latter being average.
The phone also wins on the battery front. There is a 65W SuperDart charger in the box which can fuel up the battery in around 35 minutes while the 4,500mAh battery can handle an entire day.

The real win for Realme is packaging almost everything we expect from a flagship-grade phone into a much cheaper device while improving the software experience. ‘Improving’ is the word because there is still some bloatware in the form of Moj, Josh, Bookings.com and this and that.

Now that Realme has a huge range of ecosystem products at its disposal, you really have a good choice if you are not happy with products of the other ‘me’-sounding company in the market. I am not sure if the model name of the phone will stick in people’s mind but you won’t be at all disappointed with the device. Like Max Verstappen or Lewis Hamilton, there is enough fight in Realme. There is always the choice to opt for the new OnePlus Nord phones but Realme GT 5G shows that the company is constantly pushing its limits.