Galaxy A32 beats rivals with its camera and display

This smartphone is for those who share a simple, uncomplicated relationship with technology 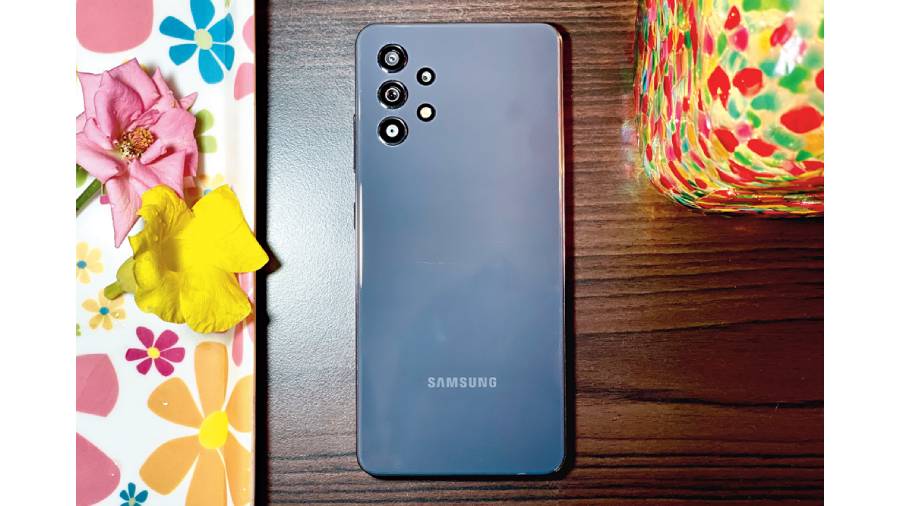 That every smartphone should blow us away is not expected. There can be phones that have nothing path-breaking to offer but at the same time, these are devices that tend to put quality over the latest-and-greatest factor. A home-cooked Sunday lunch is functional, well-balanced and satisfying. And somehow those qualities shine in Samsung’s Galaxy A32.

There’s something noteworthy in almost every department of the phone. It may not be the latest tech tricks but most of us don’t need them. Where this phone beats rivals to the punch is with the camera and display.

Each of the lens forms an island on the rear unlike other devices where there’s one big camera bump. The main 64MP shooter can capture all the fine details with little to zero noise, complete with respectable HDR. The colours are on the warmer side but if you want hues not to pop too much, move to 8MP ultra-wide. The performance is fast enough to capture pets running around while the contrast is quite good. Portrait shots offer good amount of bokeh with enough separation between the subject and the background; it won’t fail to capture the moment your pet decides to strike a pose!

There is a dedicated night mode, which impresses especially on ultra-wide mode. The only drawback in the camera department is the distortion around the edges on the ultra-wide mode; the software could have helped. Also, there could have been more shine in the video department. What you get is FHD (1,920 x 1,080)@30fps.

When it comes to display, there are no compromises. Visuals will be a feast for the eyes since it’s a 6.4-inch FHD+ super AMOLED display, reaching 800 nits, which is quite bright for a phone in this particular category. Even though it’s a single speaker set-up, audio retains crispness even at high volumes but if you want to get the best in the audio department, there is a 3.5mm headphone jack to help. The biggest #win is a 90Hz display that helps to make scrolling easy on the eye and makes the overall experience quite smooth.

Battery and processor are two areas that need to be considered together. Powering the device is the modest MediaTek Helio G80, which goes easy on battery drainage. Tap-tap games are surely not a problem and the same goes for most big gaming titles as long graphics setting is kept to medium. There are no noticeable lags while switching between apps or working on a few apps simultaneously but the question is, will the processor hold good after two years of usage? Otherwise, the 5,000mAh battery easily lasts a day and a half while there is support for 15W adaptive fast charging.

Finally, the user interface. Running Android 11 and OneUI, what you get is a seamless Samsung experience that’s also available on the company’s other phones. Very little in way of bloatware (if you are careful with the options that pop up while setting up the phone), the interface is clean and far better than what you get on, say, Xiaomi or Realme devices.

Despite a few quibbles, it’s a very satisfying device. Instead of big numbers, the phone aims to offer lag-free experience to the average user, who is hooked to social media, streaming and videoconferencing. Samsung Galaxy A32 is for those who share a simple, uncomplicated relationship with technology. Zero hype, only performance.

• Stereo speakers would have helped