Why lessons from Nazi Germany do not apply to India 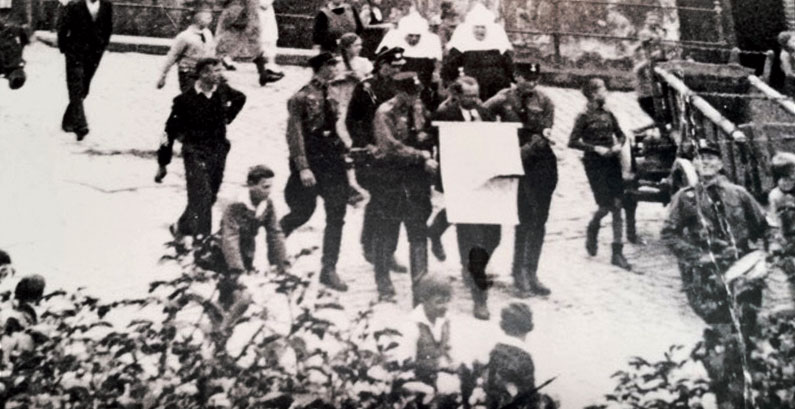 An artefact at the Topographie des Terrors museum, Berlin. The museum is housed in a modern building built on the site of the former Gestapo headquarters
Image source: Ruchir Joshi
Ruchir Joshi   |     |   Published 29.10.19, 03:46 AM

Travelling abroad, I recently visited a museum in the capital of the country I was visiting. The museum was dedicated to examining a horrific period of the country’s history which ended tragically for the nation, devastating the lives of its citizens and leaving scars their succeeding generations still bear today. The exhibits consisted of photographs and explanatory words next to the images, all starkly factual, showing no extra emotion and no judgment, save in the selections from the pieces by historians, sociologists, journalists and writers. As an exercise, I’m putting down segments from the text panels below, but with the names of the country, the leader, and the regime withheld initially.

The particular leader and the party who led the country into the deepest hell initially come to power through democratic elections. However, soon after: ‘[t]here was a very widespread sense of freedom and release from democracy. What is a democracy to do when the majority of the population doesn’t want it? There was a desire for... popular rule without parties, a popular leader figure.’

The leader and the party apparatus rapidly begin to dismantle democracy and destroy all opposition through every means possible. ‘How did [name of the party and ideology], which in retrospect was such a deceitful, megalomaniacal and criminal undertaking, succeed in attaining such a high degree of acceptance in [the country]? [Name of the leader], the [name of the ruling party] political administrators, a majority of ministers, state secretaries and advisors acted as classic populists attuned to shifting moods. They bought public approval or at least indifference anew every day. By giving and taking away, they built a dictatorship of consent with consistent majority appeal.’

Then, this: ‘From the perspective of the history of experience the [name of the regime] underwent a phase of consolidated authority, in which the ideology of the ‘folk community’ [spelling changed] apparently proved attractive to broad segments of the population. The economic upswing and the modest growth in consumer opportunities played a central role, but more important still was a change in the general mood: the great majority of [the citizens] believed in the ‘renewed rise’ of the nation and individual upward mobility, in future greatness and a better life for themselves and coming generations. To be sure, constant mobilisation was necessary, but where it succeeded the ‘folk community’ was more than a mere myth.’

There is a photograph of a low-level Opposition leader who was taken into ‘protective custody’ soon after the regime came into power, who was then led through his town on an ox with a placard around his neck by the militant organization attached to the ruling party. The humiliation was inflicted for the crime of criticizing the ruling party. There are other photographs similar in content — men with heads lowered, bearing placards saying ‘I have insulted the government’ being paraded by members of the militant organization. Then there is another photograph, this time of a young man from the country’s minority community being paraded wearing a placard saying ‘I have defiled a [majority community] girl’. This, simply because the boy and the girl were found to be in a relationship. Soon, much worse was to come for the minority community in that country.

Finally, another bit of information next to a photo: ‘The advent of the [People’s Radio Set], a technologically simple, short and long-wave radio receiver, available at a far lower price than the brand-name radios significantly increased the numbers of radio listeners in [the country]. Alongside film, radio became [the ruling party’s] propaganda’s central instrument for influencing the masses.’

The Topographie des Terrors (Topography of Terror) museum is in central Berlin, a modern building built on the site of the Gestapo headquarters from where an entire nation and then an entire continent were kept under the yoke of the most grotesque terror. Around this site of the former headquarters of Hitler’s dreaded security service other buildings still stand, buildings that housed ministries that worked in close coordination with torturers and murderers in the Gestapo centre: the finance ministry that funded the terror, the railway ministry that transported millions of Jews and others to their deaths, the air force headquarters that oversaw the terror bombings of civilian populations from Spain in the mid-30s to most of Europe in the mid-40s, the offices that housed ministers and karmacharis whose main job it was to decide on racial purity, on how to use the gold and valuables taken from the bodies of the murdered millions, the offices that held the files for forced labour, for poison gas supplies to execute the mass killings, for the future plans to take over large parts of the world and subjugate all ‘lesser breeds’ to the so-called Aryan master-race.

In this grim repository of a museum, I didn’t think of our India at all. For the cheap radio sets I couldn’t substitute the mobile phones and networks that are much less expensive than established brand-names. There was obviously no echo between Adolf Hitler’s broadcasts and Joseph Goebbels’s poisonous propaganda and the various radio broadcasts by our government or the highly-funded WhatsApp factories with their constant carpet-bombing of Hindutva lies. When I read about ‘protective custody’, I was certainly not reminded of the government mouthpiece recently justifying on TV that the leaders of mainstream parties had been arrested in Kashmir ‘for their own protection’. When I looked at the photos of the men wearing placards, I never found myself thinking of the army officer, Leetul Gogoi, tying Farooq Dar to his army jeep and driving through the Kashmiri villages, nor of all the people who’ve been lynched because they happened to be Muslim or Dalit, nor of all the people who’ve been attacked as ‘anti-national’ because they refuse to equate the BJP-RSS with the Republic of India.

No, there are too many differences. In the early 1930s, Germany was a nation that had only been temporarily impoverished for just under two decades, with a much longer social muscle memory of wealth, health, power, education and technological mastery, while India today is still a poor country struggling to get out of the development abyss. Within a very few years of its economy again picking up speed, Germany could put in place the world’s most powerful military force at the start of the Second World War. Our leaders do not have the capability of unleashing any blitzkrieg kind of destruction on our neighbours. Also the scale and the geography are very different: at the start of the Second World War, Hitler ruled over a population of about 80 million people living in an area just a little bigger than Rajasthan; anybody ruling India, democratically or undemocratically, has to contend with a huge and hugely diverse population living across a huge land mass.

As you follow the trajectory of how the Nazis termited into the structure of a weak democracy and subverted each and every institution, dynamited each set of checks and balances, the lessons are clear — but for some other country, certainly not us. There are no parallels with our current situation that starkly, unavoidably, stare you in the face.

The Topography of Terror exhibition goes on to display the brutal devastation the Nazi regime inflicted on such a large part of Europe. After that mapping come the photographs and texts about the payback, when the death and destruction came home to roost — the huge scars of rubble from the evisceration of the great German cities, the proud Reich buildings of Hitler’s egomaniacally redesigned capital turned into toasted shells, the once proud German people turned into refugees and beggars in their own homeland.

The differences are important, and any parallels you find terrifying are from your own imagination; our situation is not the same as that which prevailed in Germany in the early 30s. Hitler papered over all the cracks by turning German society into a war machine readying for and then launching the worst conflict the world has yet seen. There should be no fear that an Indian prime minister can take us into any prolonged war outside the country. And if you think he can only escalate his war against us, the people of his own country, and that the end result could be as devastating for India as it was for Germany in 1945, again that’s something you should examine. The other difference, the most important one, of course, is that we have this example laid out clearly before us, and we already know the consequences of not resisting these kinds of ugly ideologies and these kinds of naked misuse of power. The majority of Germans in the early 30s might not have been able to see where their Strong Leader Cult would lead them. Eighty years later, we in India have no such excuse.

Lipstick guns to button bugs: A peek into the world of Soviet secrets