When the dragon brings luck

In the week before the Chinese New Year, which fell on February 8, old Calcutta's Chinese community members, now settled in Canada, Europe, and the United States of America once again made their way back here to celebrate and meet family and friends. Some come in search of prospective marriage partners. As always, the Indian Chinese Association for Culture, Welfare and Development ushered in the new year with a social and cultural celebration that culminated in several dragon dances. 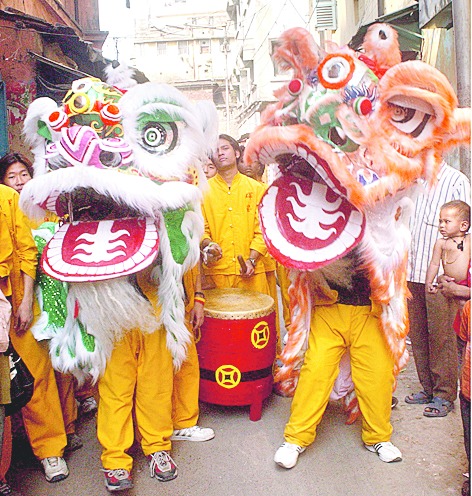 In the week before the Chinese New Year, which fell on February 8, old Calcutta's Chinese community members, now settled in Canada, Europe, and the United States of America once again made their way back here to celebrate and meet family and friends. Some come in search of prospective marriage partners. As always, the Indian Chinese Association for Culture, Welfare and Development ushered in the new year with a social and cultural celebration that culminated in several dragon dances.

This year, the celebration was held on the school grounds of Saint Joseph School - a school that many Chinese boys attended as it is close to Chinatown - rather than in the road around Tiretta Bazaar, which had been the venue for the celebrations in the past. The joyous family and community celebrations brought together the Chinese consul, Maria Fernandez of the West Bengal Minority Commission, local councillors, a group of students from Taiwan, and members of the Chinese community from Calcutta, together with their friends and well-wishers.

Calcutta is the only city in India where the dragon dance is still performed. The dragon's qualities include power, dignity, fertility, and wisdom. It brings good luck, and the longer the dragon dances, the more luck there is. Four dragon dance teams performed this year to the delight of the children and to thunderous applause when the dragons stepped down from the stage to dance among the audience.

Some members of the Fitness Club (Calcutta) had been trained to perform this intricate dance in Malaysia; it requires a great deal of coordination. There were Chinese drummers too, and several Chinese songs and dances performed by the boys and girls of the community, even little ones of two and three years of age. Friends and neighbours were also very much a part of the performance and celebration and they, along with their Chinese friends, performed several Hindi and Bollywood numbers. As Polly Yu explained, "Everyone is welcome here." Among the gracious organizers were Dominic and Ann Lee, who made guests welcome.

Just one discordant note was struck that Sunday evening. At 7 pm, an hour or so into the event, the police demanded that the loudspeakers be turned off because of the Madhyamik examinations, which is apparently a citywide rule. In spite of Maria Fernandez's pleas to allow the community to enjoy their annual festivities for which they had a permit, the police did not relent - the community continued the performance without the loudspeakers. This intrusion certainly put a damper on spirits, and while the local councillors apologized for this indignity, the loudspeakers were not turned on again.

Among the overseas Chinese was Sheng Lin, who had returned to Calcutta as part of a trade mission after an absence of 28 years. He noted that the Calcutta Chinese community in Toronto, to which he now belongs, is culturally even more vibrant than that here in Calcutta. There are less than 1,500 members of the Chinese community in Calcutta, whereas there are 20,000 in Toronto. Toronto boasts four Calcutta Hakka groups that include the Indian Chinese Association, the Hakka Youth Association, Senior Helping Hand, and the Association of India Deoli Camp Internees. Each has over 200-300 members who meet regularly.

Most of those of Calcutta's Chinese community now living abroad left here in the 1960s and 1970s as they faced grave abuse and discrimination during and after the Indo-Chinese war. The Defence of India Act (1962) ensured that any person suspected of being of hostile origin could be taken into custody. Anyone with a Chinese surname, some Chinese blood, or a Chinese spouse could be hauled away. This broke up families and caused great trauma among Chinese community members, many of whom had come to the city from the late 18th century onwards.

Ten thousand people of Chinese origin from various parts of India were detained at Deoli, Rajasthan, a desert prison camp. Although the detainees were all accused of being spies, not a single charge against them has yet been proved. In 1964, many of these internees were forcibly deported, while others were released only in 1965. The last internees were released in mid-1967.

As a result of these abuses, Calcutta's Chinese population was decimated, and decreased from 20,000 to 10,000 people. Those remaining in India were perceived as enemies and could not hold jobs except in the restaurant, tanning, and shoemaking businesses. They were required to report on a monthly basis to designated police stations. Only in 1976, when diplomatic relations between India and China were renewed, did the political status of India's Chinese improve. This shameful episode in India's history is being made into a documentary film by Rafeeq Ellias, who also made The Legend of Fat Mama.

Deoli's deep scars and the terrible treatment they received at the hands of the Indian government explain why most of Calcutta's Chinese community emigrated to the West. This coupled with the lack of economic opportunities led to an exodus from the city. The majority left for Canada, as they did not need a travel visa to emigrate there. As they spoke English, their integration into life abroad was easier than that of other Chinese immigrants. Calcutta's Chinese were absorbed into many professions, and they opened restaurants and salons. They are now flexing their political muscle - in 2015, Shaun Chen was elected a member of Parliament in the Canadian House of Commons. His parents were from Calcutta.

In spite of the terrible indignities and civil rights abuses they suffered in the 1960s, those of Calcutta's Chinese community who emigrated remain attached to the city and to the Chinese community here. Joe Li, the regional councillor of the city of Markham, attended the new year festivities. He and Lin were part of the fourth trade delegation of over 200 members from Canada who visited Delhi, Hyderabad, Mumbai, and various sites in Gujarat. On this visit, they worked hard to persuade 12 of their fellow delegates to visit Calcutta in a bid to scope out the prospect of investing and doing business here. They had meetings lined up with the chief minister of West Bengal and other government officials on February 8. It is the delegation's first such visit to Calcutta.

The week of new year is a busy one in the Chinese community. There are many family and community functions. On New Year's Day, the dragons dance again. They go from house to house and receive red packets filled with money to ensure that another prosperous year lies ahead. It is to be hoped that the new year is felicitous for Calcutta, too - and for the prospects of the trade mission. Let us also ensure that for next year, though the Chinese community represents no vote bank, their new year's celebrations will be allowed to proceed and the noise curfew extended for an hour on that day. It is the least that the city can do to show remorse for what occurred, and genuine appreciation for the Chinese community here and their contributions to Calcutta's social, economic, and cultural history.