When Narendra Modi picked up plastic ⁠— and praise

However, some questions about the eventual outcome ⁠remain 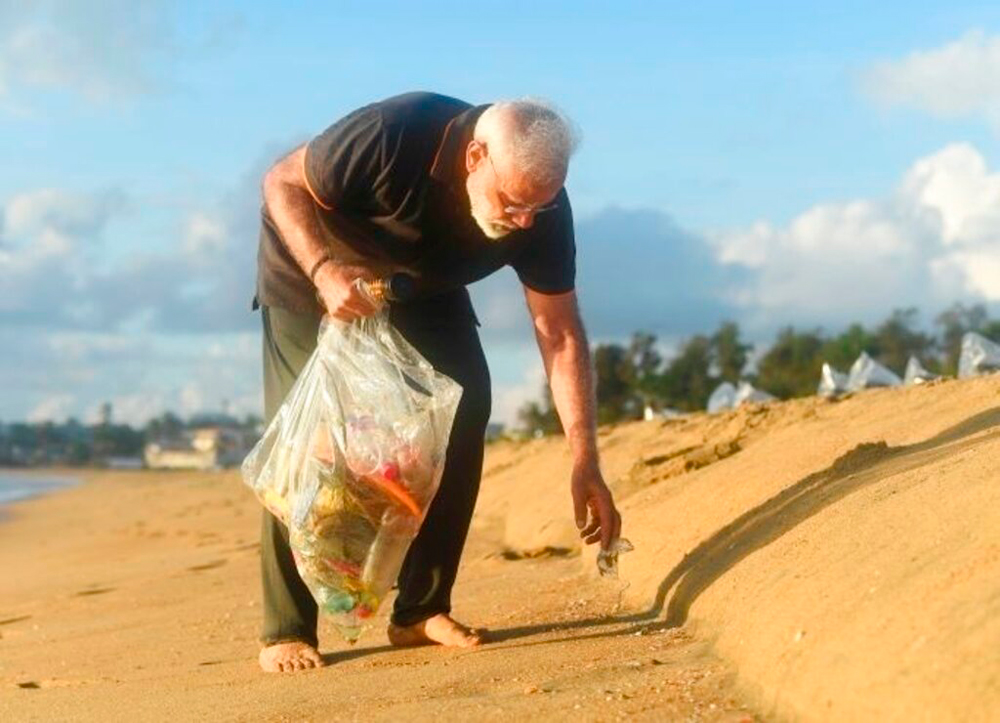 Prime Minister Narendra Modi recently impressed the world with his plogging video, which shows him picking up pieces of plastic from Mamallapuram beach in Tamil Nadu during a morning walk. We learnt a new word: “plogging” is a combination of jogging with picking up litter, which in Swedish is “plocka upp”, to “pick up”.

The PM picked up a lot of praise too. But then cleanliness, or swachchhata, as the nation knows by now, is crucial to his vision for the country, and cleanliness is next to godliness.

But both perhaps can be stretched to an extreme level. Cleanliness, or hygiene, was taken to its farthest limit by Adolf Hitler. He was obsessively clean. He would be washing himself quite often. He was very afraid of germs. He would classify many things he did not like as germs.

“Hitler set great store on hygiene. He bathed daily, often several times a day, particularly after meetings and speeches, from which he would return sweating,” writes Christa Schroeder, who, as a young woman, worked as Hitler’s secretary from 1933 until his suicide in 1945.

The concept of hygiene was also the basis of the racial theory that Hitler endorsed and used to kill numberless people. It was called racial hygiene, an official branch of inquiry into eugenics in the early 20th century, based on the idea of a superior race, that is, Aryan/German, which could be “contaminated” by inferior races. Racial hygiene aimed at keeping the superior race “pure” by avoiding miscegenation among other things. The German eugenicist, Alfred Ploetz, was one of the main architects of the theory.

Nazis, from the 1930s, invested a lot in genetics research. In 1935, the National Socialists enacted the Nuremberg Laws, which forbade sexual relations and marriages between the superior Aryan-Germans and non-Aryans.

Racial hygiene also led to a mass sterilization — of those who were not considered worthy enough to pass on their genes to the next generation. The number of citizens sterilized in Nazi Germany is estimated around 4,00,000. They included those suffering from mental illnesses, epilepsy or genetic blindness.

Finally, the notion of hygiene led to genocide. To retain the purity of the German race, Europe was required to be purged of Jews, Romani people, Poles, Serbs, Blacks and mixed race people. The methods used to exterminate the thousands of mentally ill were replicated in the concentration camps all over to execute the mass killings.

Nazi vocabulary, in speaking about Germans versus Jews and other “inferior” races, consistently used the metaphor of health versus disease. In Mein Kampf, Hitler describes Jews as “a dangerous bacillus”. A Nazi poster for occupied Poland, which looks like that of a horror film, depicts a giant louse and a Jewish man with a monster face, and says: “Jews — Lice — Typhus”.

Such hygiene can be very bad for the health of those on which it is practised.

One wonders what vocabulary is being used in Kashmir and Assam, or will be shortly for the whole of India.

But our prime minister is only picking up plastic, bit by bit, bottle by bottle. It’s a noble thing to do. He looks impeccable too. In his sharp track suit and with the meditative expression on his face, he is the very picture of contemporary cool and correctness.

One, what was the prime minister using to collect the plastic? It looked suspiciously like a plastic bag itself. According to reports, the bag is a single-use plastic one.

Two, when beaches are cleared, by a prime minister or others, where does the cleared plastic go? The PM handed over his bag to the hotel where he was staying, but according to environmentalists, often the most visible part of a prominent beach is cleared and the rubbish is dumped onto another side of the same beach.

We will not even get into where people not wanted in the country can be dumped.