The CAB has struck a lethal blow to India's pluralistic ethic 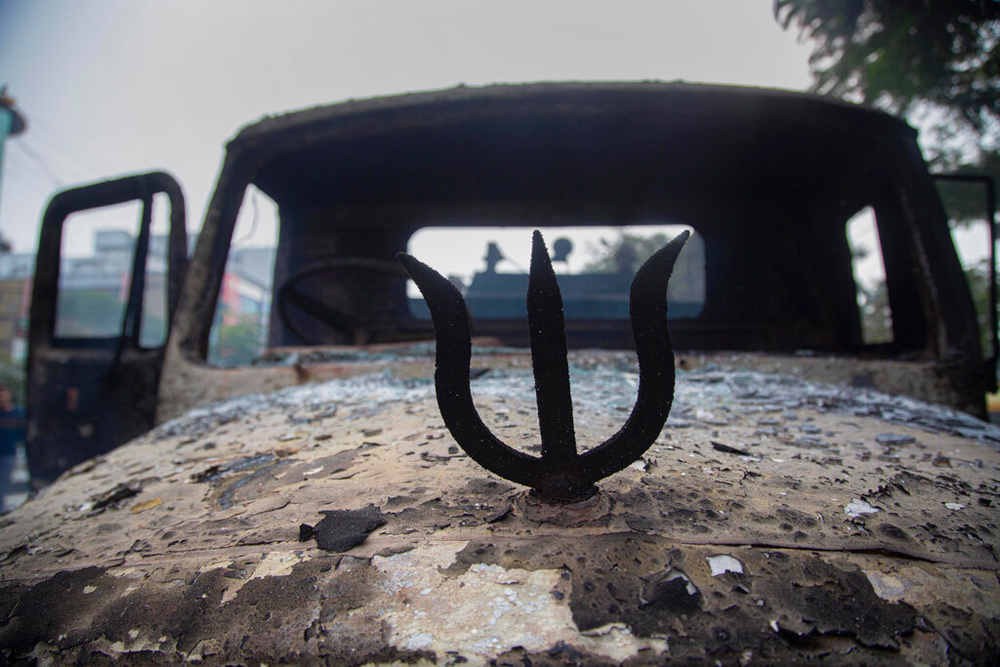 A trident on a car burnt during the protest against the Citizenship (Amendment) Bill in Guwahati on December 12
(AP photo)
The Editorial Board   |   Published 12.12.19, 06:52 PM

New India has made a tryst with a new — but chilling — destiny. The passage of the citizenship (amendment) bill, which was passed by both Houses of Parliament, is a testimony to the growing distance between India and the Idea of India. At the hour of its inception, India, unlike its western neighbour, had chosen to follow the path of democratic constitutionalism. This implied that citizenship would be viewed as a matter of right, and that such a right would be bestowed on the principle of equality. India’s nationhood, a beacon to the world at large, had remained

composite in character. The Constitution had, thus far, ensured that the country refused to discriminate citizens on the basis of faith, creed, caste, language, gender and so on. The CAB, which had been accorded a pride of place in the electoral manifesto of the ruling Bharatiya Janata Party, has now struck a lethal blow to India’s pluralist ethic by choosing to grant citizenship to Hindus, Sikhs, Buddhists, Jains, Parsis and Christians — but not Muslims — from three neighbouring nation states. What is audacious about the CAB — the Union home minister is an enthusiastic proponent — is that it seeks to camouflage the BJP’s naked display of exclusion in the garb of humanitarianism. But the slip, unfortunately for Amit Shah and his party, is showing. Parts of the Northeast are up in flames. Assam, which has been sensitive to the issue of immigration because of its singular experience with influx, is vehemently protesting against the CAB as it threatens to upend the critical clauses in the Assam Accord. That the CAB has very little to do with benevolence is also demonstrated by the exemptions that the BJP was forced to extend to specific areas in the Northeast. When read in conjunction with the National Register of Citizens that Mr Shah has threatened to unleash on the republic, the CAB resembles an express political and ideological project, one which seeks to transform a secular republic into a majoritarian polity.

The poison is not being administered by the BJP alone. It has received able assistance from several other parties whose vote in favour of the bill in the upper House has sullied their commitment to inclusion. The capitulation of the political fraternity implies that what stands between secular India and its implosion is the court. That outcome would be decisive for the future of this democracy.