'We must unequivocally reject CAB 2019 and at the same time, in the same breath, NPR/NRC' 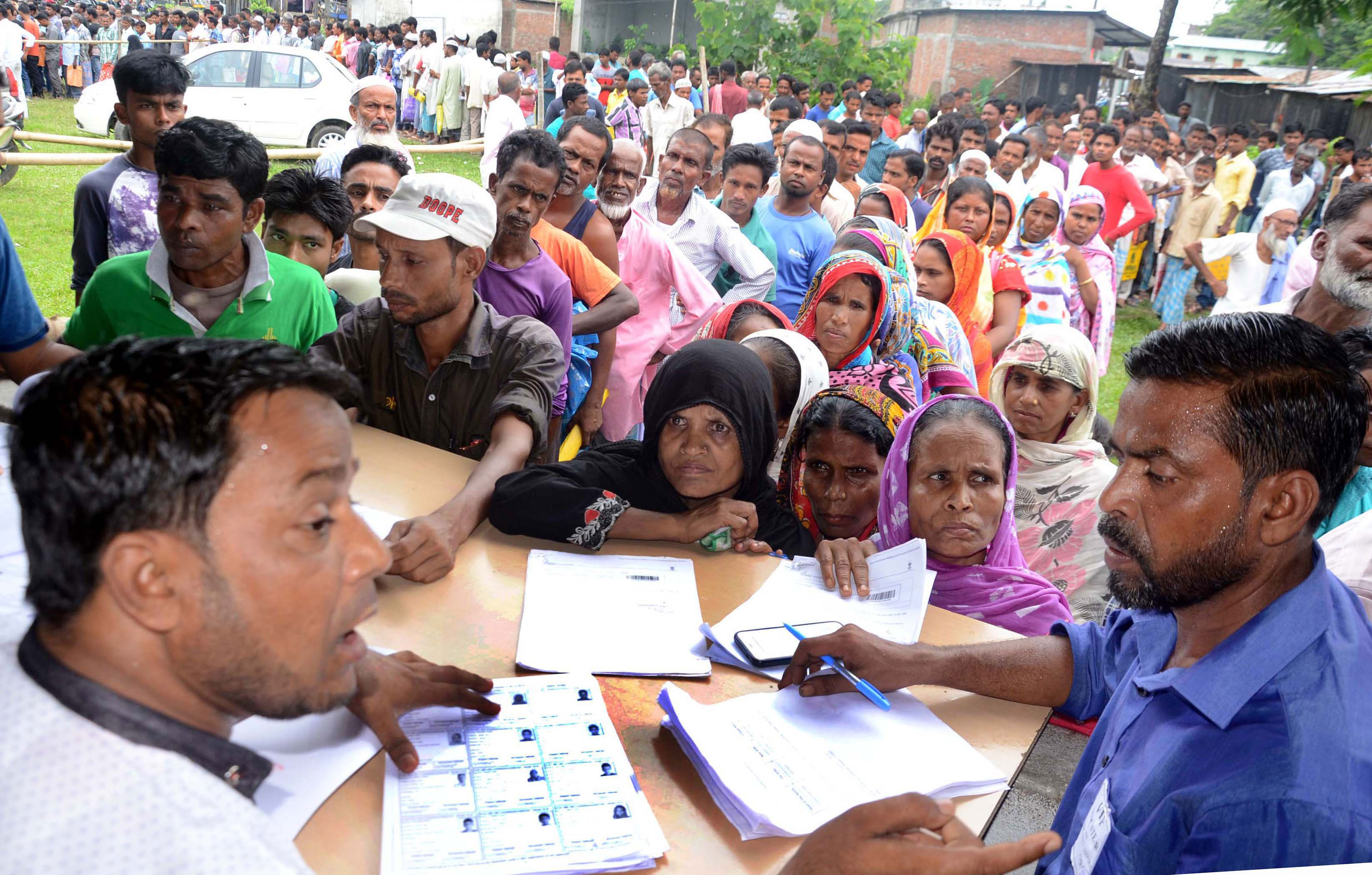 Residents lining up for checking the final draft of NRC in Tezpur. 'Today 19 lakh persons live a broken existence in Assam with the sword of statelessness hanging over them. Does the rest of India want to tread this path?'
(Telegraph file picture)
TT Bureau   |   New Delhi   |   Published 10.12.19, 08:51 PM

Over 720 jurists, writers, actors, activists and citizens have issued a statement against the Citizenship (Amendment) Bill and the National Register of Citizens, describing these as “misguided” and, worse, “unconstitutional”.

The following is the text of the statement:

Citizenship has been defined as the right to have rights. Citizenship in India is based on the non-negotiable principles of equality and non-discrimination. India, when it became Independent (1947) and thereafter when it firmly rooted itself in an inclusive and composite nationhood, in 1950, accepted that people of all faiths, creeds, castes, languages and genders, equally and without discrimination, are Indian.

In sharp contrast to this foundational commitment and history, over the past six years, there are clear political moves to fundamentally assault and redefine this constitutional basis of both Indian nationhood and citizenship. Especially now, with the newly drafted proposed Citizenship (Amendment) Bill, 2019, and second through a hurried, and not thoroughly debated, all India-level NPR-National Register of Citizens (NRC) process.

Both these moves need to be categorically protested and condemned.

CAB (2019) makes a promise to entertain requests for refuge and citizenship to all those “persecuted minorities” from three Islamic countries —Pakistan, Afghanistan and Bangladesh — who reached India before either 2014 or later.

The amendments, by giving special privileges to Hindus, Sikhs, Buddhists, Jains, Parsis and Christians from these three countries, single out Muslims for exclusion. For example, neither the Ahmadiyas, who are undoubtedly persecuted in Pakistan, nor possible asylum seekers like the Rohingyas from Myanmar or Tamils from Sri Lanka have any place here.

For the first time there is a statutory attempt to not just privilege people from some faiths but at the same time relegate another, Muslims, to second-rate status. The proposed amendments to India’s 1955 citizenship law need to be strongly rejected on these counts alone, in that they are divisive and discriminatory in character.

The CAB, 2019, is at odds with constitutional secular principles and is a violation of Articles 13, 14, 15, 16 and 21, which guarantee the right to equality, equality before the law and non-discriminatory treatment by the Indian state.

This regime threatens to go further. Through the process of enlisting for a National Population Register (NPR) and thereafter a National Register of Citizens (NRC), the present government appears intent on causing huge upheavals within Indian society.

Assam has, especially since 2013, been reeling under the impact of this ill-conceived exercise. Apart from the huge material costs, the human costs have been immeasurable. Death, families torn apart; detention camps and foreigners’ tribunals; fear, the spectre of statelessness — this is what the ordinary people, especially minorities, Dalits, women, children and the poor have had to suffer and continue to suffer. The worst impacted are women and children.

A nationwide NRC will unleash widespread division and suffering among people across the country rather than address the critical needs, from food security and employment to the annihilation of discrimination based on caste, community and gender, to the freedom to speak, worship, and live as our diverse people choose.

Today 19 lakh persons live a broken existence in Assam with the sword of statelessness hanging over them. Does the rest of India want to tread this path?

Never mind this history, the Indian government wishes now to replicate an Assam-like trauma on the entire Indian people. While the government has announced, or rather decreed, that the NPR survey would begin from April 2020 onwards, there has been no public debate and clarity –- in parliament or elsewhere --- on the criteria of inclusion and exclusion within this “register” once it begins.

Neither has there been any deliberation on the documents that will be required and demanded as standards of proof. There is also complete silence on the “cut-off date” that will be used as the bottom line.

Indian citizenship law grants citizenship by birth to all born before 1987. After that date, apart from the citizens’ birth the requirement is that one parent needs to have been born in India before 1987.

After 2004, there is an additional qualification that neither parent should be an illegal migrant. Given this calibration in existing law, what is or will be the criteria for inclusion and exclusion in the NPR/NRC? In a constitutional democracy, can such an exercise be shrouded in secrecy?

Indian society is stratified with the “document” being the privilege of the moneyed and few. Internal migration, natural and manmade disasters in particular, affect and target marginalised and displaced populations who have to struggle to produce these standards of proof.

India has not yet given its migrant labour populations basic voting rights. Despite a birth registration law that dates to 1969, only 58 per cent of Indian births are today registered. The Aadhaar experiment has thrown up its own levels of horror stories.

Under these circumstances, must Indians allow their government to throw them into this conundrum of proof of existence by the document?

We must unequivocally reject CAB 2019 and at the same time, in the same breath, NPR/NRC.