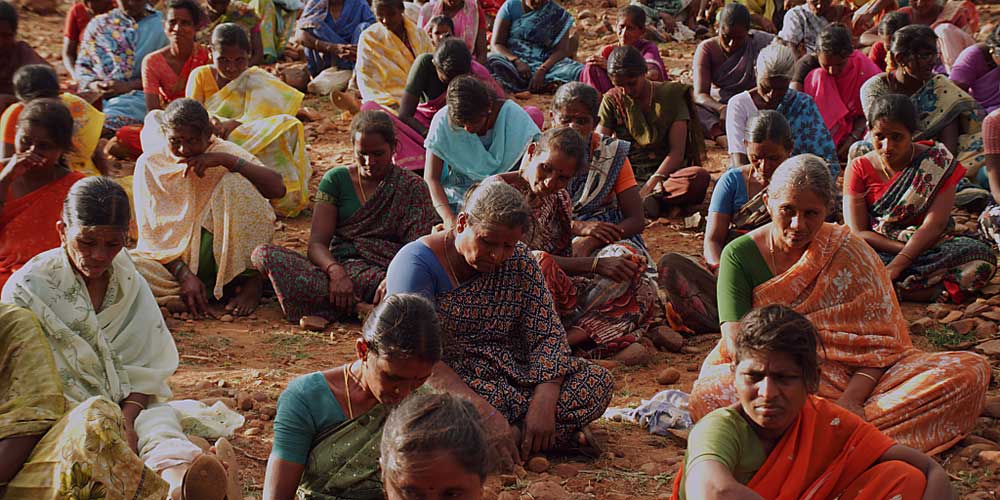 Rural workers at a protest in Tiruchirappalli, Tamil Nadu. Votaries of a universal basic income argue that it would give an opportunity to the poverty-stricken sections of society to maintain a sustainable livelihood.
(Shutterstock)
Atanu Biswas And Abhinandan Sinha   |     |   Published 09.04.19, 11:06 AM

The concept of a universal basic income is now being debated seriously in the country, possibly escalated by the Economic Survey of 2017. Some believe that the idea of a specified ‘basic income’ for every Indian citizen, from the richest to the poorest, might give an opportunity to the poverty-stricken sections of society to maintain a sustainable livelihood. For many others, the UBI is perceived to be a safety-net for people engaged in jobs related to artificial intelligence. And many think it is much less costly compared to ‘targeting’ welfare at specified groups.

Ideas of the basic income approach can be traced as far back as Kautilya’s era, discussed in Arthashastra between the 4th and 2nd centuries BCE. From the 16th century, this idea grew popular among Western thinkers across the left and right ideological spectrums. In present-day Britain, the Green Party of England and Wales, the Scottish National Party and the Scottish Green Party support citizens’ basic income. In 2016, Benoît Hamon, the socialist candidate for the French presidential election, pitched his campaign around a promise of UBI. In June 2016, Switzerland became the first country to conduct a referendum on such a plan, for a suggested monthly income of 2,500 Swiss francs for adults and 625 for each child, to fight poverty and social inequality and guarantee everyone a ‘dignified’ life, although about 77 per cent of the voters were against it. There is an increasing demand in Taiwan for a referendum on UBI as well. Finland executed a pilot programme for 2,000 adults to receive a monthly handout of 560 euros for 2017-18.

Cash benefits just help the State increase the consumer’s consumption budget. The effects of a cash benefit programme on the local economy was seen in Malawi in 2006-07, resulting in additional production on account of increased demand and beneficiaries gaining access to goods and services they would not have had access to otherwise. The programme also contributed to reducing underemployment in the region. There have been two pilot studies on UBI initiated in 2010 in rural Madhya Pradesh.

Although many believe that a guaranteed basic income might make some people lazy, partial results from Finland’s pilot did not find data to support this. In the United States of America, the New York Congresswoman, Alexandria Ocasio-Cortez, along with the Massachusetts senator, Ed Markey, devised the idea of a ‘green new deal’, which includes UBI along with other measures to fight climate change, spur economic growth and improve social welfare. According to an estimate of the columnist, Noah Smith, the UBI component of the GND would cost $3.8 trillion a year, which is about 20 per cent of the US’s gross domestic product. The proposed GND has already gained public support and might become a major factor in the next presidential election.

In India, a UBI of Rs 1,000 per month, if implemented, would cost about 8 per cent of the GDP. That is huge money. Since UBI has not been implemented in any country, its exact impact on the economy and society is unclear. It is also not clear how States would fund such huge costs, and whether or how they would find money to fund welfare schemes like education and healthcare, unless provisions for more taxes are created. Some have advocated a relatively large UBI, only if public services such as healthcare and education are scrapped — that is, privatized and opened up to profit.

However, this seems the closest the world has come to implementing UBI. The Left and the Right have rarely ventured so close to each other. However, leftists are caught between ‘real freedom for all’ versus ‘real work for all’, and think UBI is a bailout from the wrath of the ‘reserve army of labour’. Capitalists cheer UBI because it breaks the link between work and pay, giving relative flexibility to both employers and employees to migrate to high-skilled jobs in the age of rapidly growing automation, without any binding minimum wage. In a rare moment of history, the Left and Right have crossed paths.

The pitfalls of a cash income support scheme