Advertisement
Home / Opinion / The troubling relationship between law and disorder

The troubling relationship between law and disorder 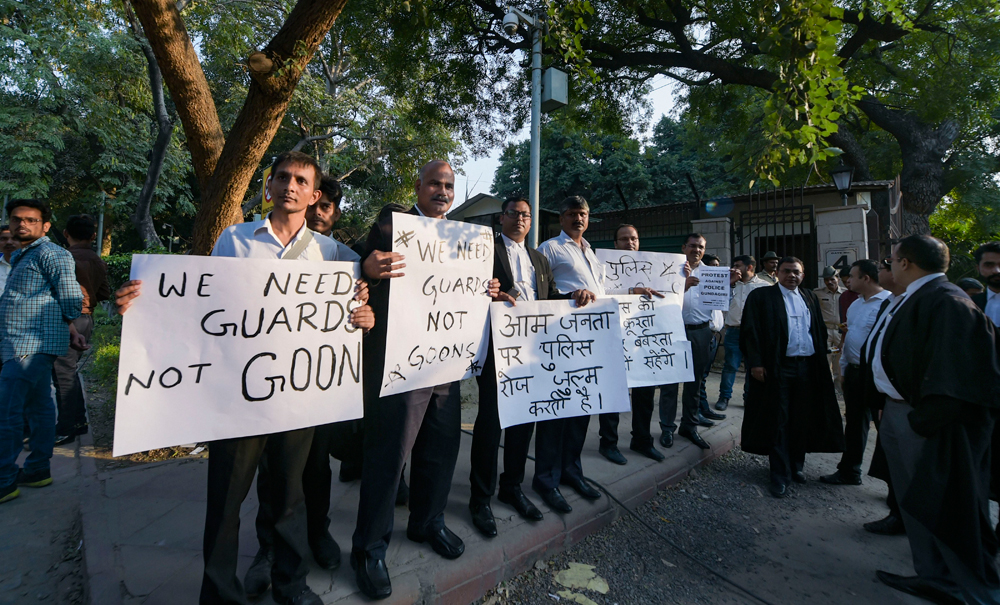 Lawyers at the Delhi High Court on Wednesday, November 6, 2019. There are whispers that the lawyer fraternity, especially the Bar Council of India that has been critical of the police, is patronized by the powers that be. The prolonged silence of the home minister may have fanned such speculation
(PTI photo)
The Editorial Board   |   Published 07.11.19, 07:52 PM

New India can be a topsy-turvy turf. Its capital, for instance, had been temporarily besieged — ironically by the keepers and the practitioners of law. An altercation at a parking lot flared up into a full-fledged confrontation between the police and the lawyers, indicating the troubling relationship between law and disorder in the country. Lawyers have complained of police heavy-handedness at the Tis Hazari court complex. The charges against the lawyers are equally grave. The rank and file of the Delhi police had protested en masse after some lawyers assaulted policemen. Their anger, tellingly, had also been directed at the senior officials in the police hierarchy, baring fault lines and tensions in the khaki pecking order. There are whispers that the lawyer fraternity, especially the Bar Council of India that has been critical of the police, is patronized by the powers that be. The prolonged silence of the home minister — does not Amit Shah believe in nipping a problem in the bud instantly? — may have fanned such speculations.

The consequences of such an unprecedented face-off between two crucial pillars upholding the edifice of law and order cannot be but unfortunate for citizens. Lawyers on strike locked the doors of important district courts in the city while hundreds stayed away from four other courts, inconveniencing litigants. The performance of the police has been equally shameful on several occasions. Three years ago, large segments of the force watched as lawyers beat up university students, teachers as well as journalists. The passivity of the police and the aggression of the lawyers on that occasion can be attributed to their eagerness to prioritize political affiliation over duty and justice. These transgressions — the lawless lawyers had gone scot-free — merit serious scrutiny. This is because thuggery or its abetment, especially by men in robes or uniform, cannot be accepted in a civilized polity. Furthermore, such offences erode the credibility of these institutions in the public eye. This kind of damage is best avoided at a time when institutions vital to the safekeeping of Indian democracy are being brought under severe stress. There should be an immediate and impartial inquiry into the allegations and counter-charges to establish the truth of the matter in this instance. The guilty, on either side, should be penalized so as to discourage such lumpenism in the future. An immediate remedy is the only way to redeem the sorry image of the minders of the law.

Lawyers lock up courts in Delhi

Old grouse against lawyers bursts out in Delhi police protest